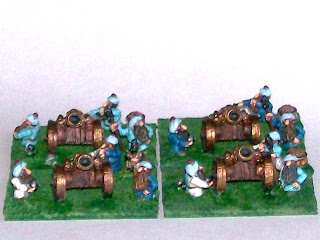 As you can see here are the latest of the 10mm Warmaster Dwarf cannons. I did get them finished and while not blowing my own trumpet they came out quite well. It was a pain to get them finished but now that they are I feel good. I may have to start the next unit over the weekend.

I have not been up the shed due to working all the overtime so when I check I am hoping that everything is dry enough to work on. The Cold and inclement weather has delayed work on the two construction projects, but not disastrously so.

Well the crisis that stopped me blogging on Monday is over now. So I can continue.
Nothing is dry up the shed. So I can't work on the moon boards or the cliffs, which is a shame but there is absolutely nothing I can do about it at least for the moment so the best thing to do is just wait and see how it goes. I would love to say I'd done this to it or reached that stage, but as it's not dry enough at the moment I'll have no choice but to be patient.

I have done some work on the painting table however. My mental block on the 10mm dwarf cannons has passed and they are now progressing, I should have them done by Friday. I'll say no more for now and with luck chuck a photo up end of the week.

I am also now working on Skaven Space Marines. 6 more started, All the conversion work and even some of the base colours. I really need to talk to a few GW employees about these and get some decent feedback as opposed to working in the dark. I can't see it happening in the next few weeks though, but by then I should have a squad done and then I can start to ponder my direction. I am loving the idea of a Rat ogre dreadnought though so as soon as I can find the bits cheap enough on eBay (cheap rat ogre head and cheap dreadnought....not a chaos one I'll make it chaos without the aid of GW this time).

There are a couple of things I'm working on that I don't want to mention at this stage, (Kev knows Relfie so ask him if you want.) They are gaming and even zombie related but unless I can get them to work how I want I don't want to talk about them further.

I have been thinking about Zombie games recently. Most of the games we play are in the first few weeks of the Zombie-Apocalypse. Kind of the "Walking Dead" setting with a few survivors either scavenging, escaping or just moving through an area. While these are great fun and I'm not saying we NEED a change it does make me ponder if we should play it as more of a campaign. By this I mean the same sets of characters used each time to drive a storyline forward. Is day today survival sufficient for us or should we be looking to make a series of games where players actions have repercussions. Maybe if they drive cars a lot they might need to scout petrol stations, use a lot of ammo gun stores. Will the other local survivors be hostile to them for "stealing" resources or even just making lots of noise. After all more noise means more zombies. So something simple like driving a car down a street might seem fairly harmless but what if you are a survivor living by stealth and some road hog drags more living dead into your neighbourhood.

Another thought is what happens after a few months, how will the survivor groups have changed. Will they have built forts that they can defend or will they be nomadic. If nomadic what modifications will they have made to cars? Survivor architecture will also be different, boarded doors ad windows are only the start to the possibilities. Solar panels can provide warmth and light and running water, so the roofs of buildings become far more important, water collections and even small vegetable patches for those looking o live for many years to come. There used to be a textile factory in Leeds that had Sheep on it's roof. As a survivalist why wouldn't you do the same. I think there's some modelling opportunities to be had here, but at the moment they are just pondering. I think there's more possibilities for zombie games than just the out break period which we have tended to concentrate on. Still it's a lot more to think about, but enough of that for now.

I did go to the wargames club on Sunday, but I did not stay all day, I treated it more as a social then a gaming day. Most of the regulars could not make it either apathy, work, broken ankles or family commitments. Peter did turn up and will be their in 2 weeks. Graham put on a rather nice American Civil War game. (All Grahams games look nice, lots of scenery and every thing painted and he even has read the rules enough times to know what he's doing.....In my opinion Graham is the rules guru at our club.) I did mention club shirts and the treasure said the kitty had enough money just sitting their, not being used..... I am tempted to pay for them myself just to stop other people whining that they don't like them, or want a different colour/design or layout. It's funny but the ones that make the most fuss tend to be the ones least likely to do anything themselves,(just an observation). I did notice that there was a flaw in the design though, unforgivable to all wargamers on the dice logo I had a 1 and a 6 on adjacent faces. I have yet to change it on the computer, but at least I spotted it before someone else did. I'll start working on the shirts again, once this batch of overtime is out the way.
Posted by Clint at 05:44 1 comment: