How to lose a campaign part 3

Yes another lose for me and the federal troops. I have yet to win or even draw a game in this campaign and I swear I am not trying to lose it. I read the campaign rules last autumn that Graham had written and made the prediction back before a dice was rolled or a figure was put on the table that whoever won the first game in the campaign would win the campaign. So far I have found that to be the case. I am not having a go at Graham who wrote the campaign rules I really am not but I am enjoying saying "I told you so!"

Anyway here is what happened this campaign turn. I can already tell you what the result will be for the next one as well. But I will let you guess.

We are playing Civil War battles by Peter Pig. A very well balanced and good set of ACW rules. Not my first choice for rules but I do like them.

The first upset for me was that as I was again defending I would loose troops from the table before the game started. I had a nice VETERAN unit in the 2nd Objective who rolled so badley they all had to start the game at 1/2 strength and off of the table. Oh well bad things happen in war. And I had 2 other veteran units. 1 started at 1/2 strength on the table, the other at full strength off the table. I did have 3 average intantry units as well and did have 2 of them on the table at 2/3rds strength.

So as Scott and Tim had already Captured the 1st objective in the start phase nothing I could do to get it back. So I managed to move (Just move) an average unit into the farm (2nd objective) to hold it. Almost immediately a veteran Rebel unit close assaulted them. My troops instantly turned tail and fled the board. So the second objective was lost on turn 2! 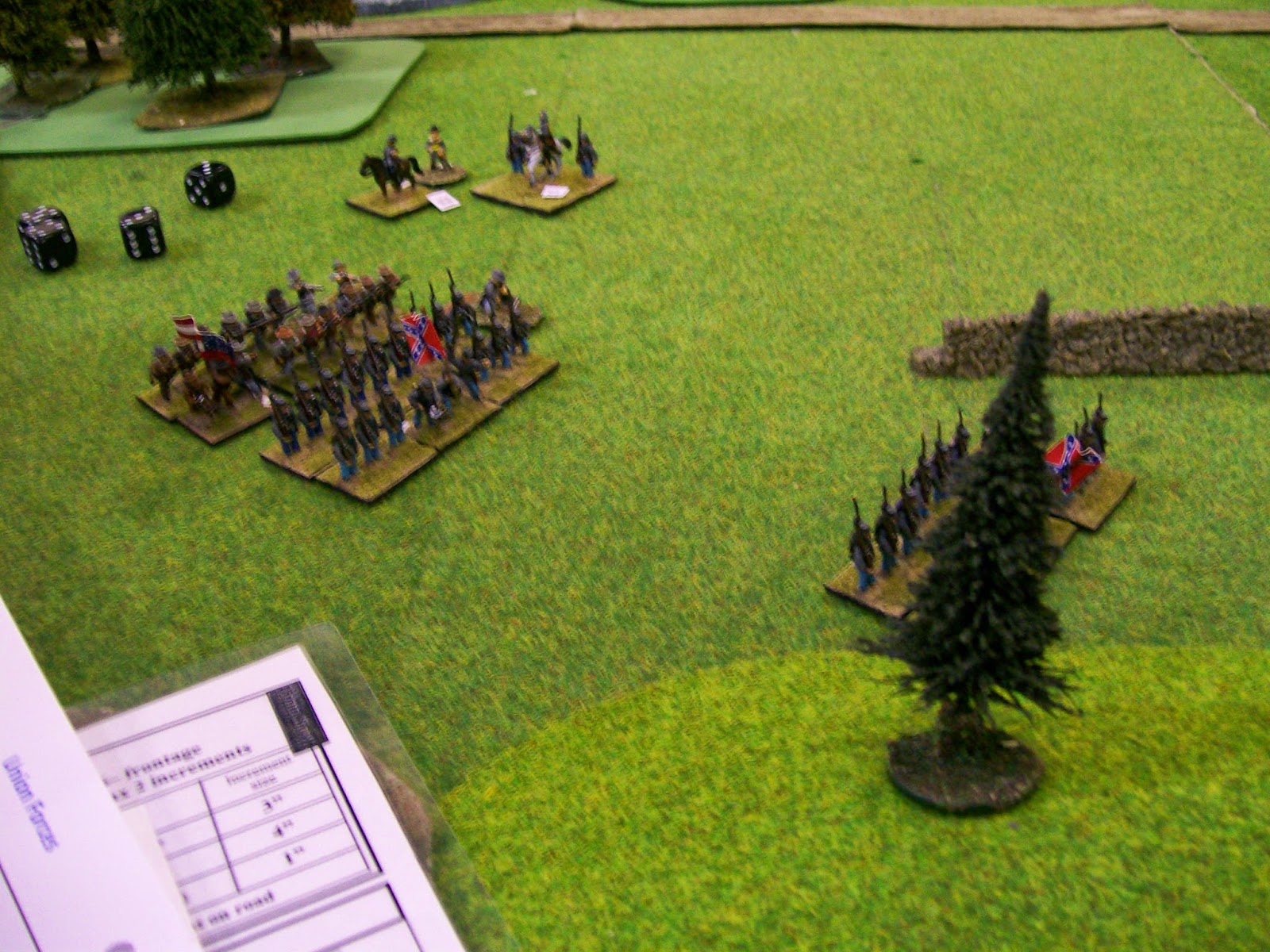 Foolishly I had put my cavalry too far forward and a second Rebel Veteran Unit managed to charge them, they fled but took some damage . They did stay on the board though. This meant that Scott was able to bring 3 confederate units altogether and keep forcing them back. No complaints my mistake for moving them there in the first place. Eventually by the end of the game they had been whipped out to a man with just nothing I could do to prevent it. Shame but I made the mistake so I will live with it.

Elsewhere on the board with 2 objectives held there was no way I could move the Rebs. This gave me the choice of trying and loosing even more troops of carry out a fighting withdrawal. With each of my units out numbered between 3 and 5 units to each of my depleted units I decided the base action from a campaign point of view was to withdraw.

I tried to get everything from the table while keeping everything in good order. I was still clinging precariously to the last objective. I had a 1/2 strength Raw morale Union Cavalry their and a single (Now Damaged) gun . At the other end of the board I had 2 guns (Undamaged) and a battered Veteran unit that started the game at 1/2 strength . The infantry would not get motivated enough to move from the table. So Scott sent his 5 Infantry units to budge them as he was intent on slaughtering them. Not that I blame him both confederate players played well. I was able to ruin one of his units (an average one) and make another fall back.

But the countdown had meant the end of the game. So another Federal Loss 45 pts to 48. yes just 3 points in it and if we had stayed and fought on the loss would have been FAR greater so with the exception of the bad placement of my cavalry I don't think we did badly. But a loss is still a loss.

The next battle will not see the campaign come to an end. But It will mean from now on I will have to pay full points for units that have absolutely no chance of remaining intact before the game starts. So win or lose the game after that will see what is now a VERY tattered  army take the field.

The way the campaign is set up I am now facing a snowballing steamroller and there is nothing I can do to alter that. Graham (Campaign administrator) will still insist that IF I get a naval battle I could win that battle. And true I still could. BUT my land forces are so battered that the Confederates will continue to attack no matter what happens in a single battle as they know there is nothing I can now do to stop them.

But I will play on.


Cheers for reading. Take care and have fun. All the best Clint
Posted by Clint at 02:20 19 comments: