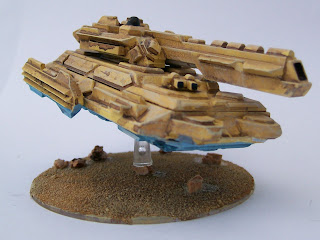 Just for a break from VBCW stuff. Here are two Kra Vak Heavy Grav Self-propelled Guns. The are By Ground Zero Games and 15mm in scale. (Scale seems odd to mention when dealing with Aliens, because they could be any size really.) GZG Code No: V15 33A. They come with guns elevated at about 35-40 degree pitch. I thought they looked better near horizontal so after about 5 minutes of filing on each one made that adjustment. I must say the look a lot meaner and nastier with level guns. It took me ages to decide on a paint scheme as I was looking to make them more "alien" but in the end settled on a basic single colour top deck and from below with a heavy was an some very rough dry brushing. The problem was I was over thinking the need for colour differences and in the end decided that simple and straightforward beat clever and fussy! 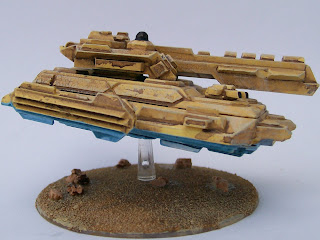 You can see the blue under side which was again a very simple one colour wash and Highlight. It's not fancy but it is at least a nod to the fact that they are gravatic flying machines. Other than my modification the modelled went together very easily and with hardly any mold lines or flash to worry about. So all in all I'm quite happy with the construction of them. Being metal they are heavy which does make me wonder about the strength of the flight stands so I have selected my 2 shortest stands to assist the rigidity, although in my head I am still sure they will break.  Ahh well time will tell. 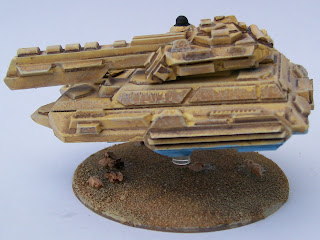 I have no markings on these beasts. Which is to say that maybe I have but maybe they are not discernible by our eyes. The Kra Vaks seem very adept with Gravity vehicles so perhaps the markings are made with different densities of materials as opposed to colours. They are aliens so who can say (Well maybe Jon Tuffney the designer!) What I d like about them is the "Boxy" hard edged feel to them. Very angular and aggressive. 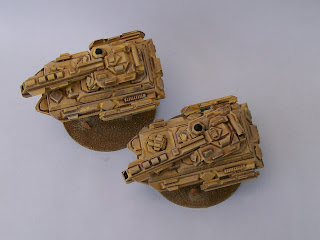 Two from above just to show a different view and the very solid feel these vehicles have. In retrospect I should have put something to show how big they are, well maybe next time. At this stage I have one mo Kra Vak vehicle to assemble and paint (an APC) but this is not even near the paint table at present. Then It will be to expand the force with more ground-pounding infantry,  some power armour and a few more APC's . At this stage I can't see me doing so before September as it is not really on my target list for projects this year (it was last years and I did not manage it). Still it does bring the Kra Vak force a little closer to completion which is never a bad thing.
That's today's blog post. I'll be getting a new computer over the weekend (with this one the wheel is spinning but the hamster is dead). so no guarantee but I will try to post again on Sunday, So until Sunday have a great time and all the best.Clint 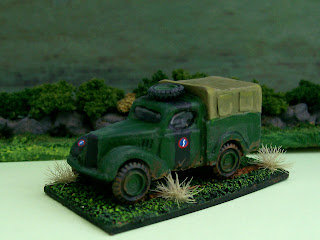 AS you can see this is a 20mm Austin Utility effeminately known as a "Tilley". This is the 1936 version of which approximately 300 were built. They are so widely loved and collected around 160 of those 300 are still in existence. Granted many of those a wrecks but there are some really nicely restored versions. The "Tilley" saw both commercial and military service and thus I think makes a very nice addition to VBCW setting. 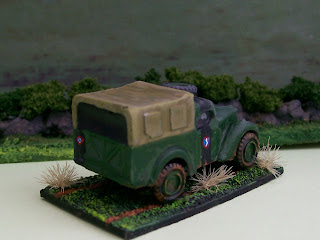 This figure is By Frontline Wargaming as is 1/72nd scale. I have added British Union of Fascists (BUF) markings to the doors as well as front and rear panels. Many of the commercial "Tilleys" had an enclosed rear pick up van section, but this one has a canvas tilt. The model paints up very well and has the feel of something very useful in real life, but when the fighting starts will no doubt get squashed like a bug.

I needed to get some VBCW figures done after my spray debacle just to get back in the saddle. While I work out exactly  what I need from Tim at IT Miniatures . I have some ideas and will send him an order through in the next few days. What I do know is that the two main forces involved will be Anglican League (AL) and British Union of Fascists (BUF) as they are the two most active factions locally. The planned game will most likely be part of the "Kent Campaign" briefly mentioned in the source book which concerns the BUF marching on Canterbury held by the AL. The campaign was halted at the river Medway. so that gives non VBCW players a tiny insight into what's going on. 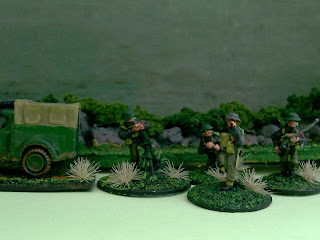 The "Tilley" Needed something to transport. I have used some SHQ 20mm figures early war British Expeditionary Force. The majority of the figures and vehicles used in the game will be Frontline and IT but I will need to use a few others to flesh the ranks out. As I already had these It made sense to use them. So the "Tilley" carries 4 troops, a commander, and 3 other ranks. Their planned function is as a rapid reaction team. Armed with a medium mortar and a Boyd's anti-tank rifle they should be able to deal with a wide range of threats. 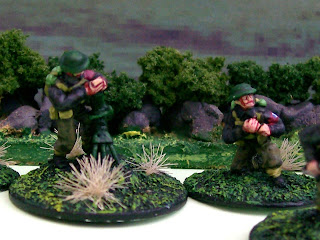 On the smaller pictures you can see BUF armbands and "Lightning Flash" insignia. They are all wearing Black tunics which is common in the BUF, but not compulsory. The commanding officer also has a black helmet which signifies him as something different from the Other Ranks. I have yet to fix where these troops come from, or any other details as that will depend on the scenario we actually end up playing.

That's it for today, thanks for reading. Hope you found something of interest and I will post again on Friday. Til then keep calm and roll some dice.
All the best Clint
Posted by Clint at 22:35 12 comments:

2 steps forward and 1 step back! 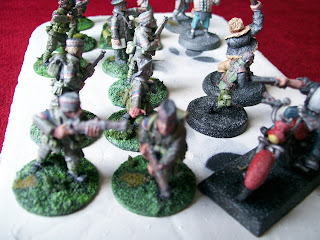 Grabbing a can of spray varnish I decided to finish a few figures, including 2 which were going to be in the Zombie Bloggers Associations diorama competition. The only thing was I picked up the wrong can and splattered them all with white primer. I will not be ready for the competition now but would like to wish the other entrants the very best of luck. I have never had this accident before, so I guess I was due one. Needles  to say it is a gutter but I can put it to one side and move on. Let's just say it's very upsetting and just leave it at that.

﻿﻿﻿
Moving forward what else is new? As regular readers will know Club is every other Sunday. We had a good turn out yesterday and maybe picked up 2 new members. One is a returning member from many years ago and the other is a friend of Dave's. As such there were 3 games being played. Dave hosted a series of "Dust Tactics" games. Peter a WW2 game in the jungles of the far east. And John introduced the club to Bolt Action. I had problems at home so did not stay too long and did not play any games, but they all looked like they were having fun in their usual way. Tim was moaning about dice, as was Dave. Patrick was being fluky and destroying the objective in his game with a hoard of Zombies. Graham was being tactically efficient and destroying Tim's tanks. And the rest were all acting in character as well.
What I did manage to do at the club was to sort out the turns of the officers in the Caen Campaign. I need to process them and sort out the new squad rosters that take account of experience, casualties and replacements. All dependant on sequencing there could be a couple of very interesting battles in the next campaign turn. But until it happens it's only speculation.

I also managed to scrounge (OK it was a figure exchange) some vehicles in 20mm for my re-start of a VBCW. At least one of these will be converted into an armoured lorry but the rest will remain logistic support.Talking to the guys it seems they are happy to do VBCW as our show game for BROADSIDE as opposed to "Mushonga Station". Indeed many of them were had some degree of enthusiasm for the subject. I therefore will start to build some terrain for it at the earliest possibility.﻿
Posted by Clint at 01:06 18 comments: