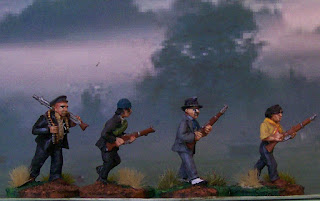 Yes just 4 more 28mm figures for VBCW, which reminds me I still have to do the AAR from the show! So AAR on Sunday. 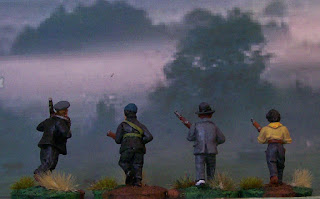 I think the figures are a mixture of Footsore and Empress miniatures but do not actually know. What I do know is that the first figure is carrying a MG34 or MG42 so is probably a WW2 partisan or Volksgrenedier as the MG 42 would be slightly early for 1938, but never mind he can still find a home in the VBCW! The other 3 carry rifles. The one on the far right is of course a lady as ladies did fight in the Spanish Civil War in some years but were usually nurses and or cooks in the later years.  While the third guy is wearing either "Spats" or Golfing shoes! I will let you decide but it does break up the normal black and brown of outdoor footwear. personally I think it is a bit of fun so I went for it.

More VBCW to come next week but that is it for today.

Thanks for looking and see you soon I hope.
Take care all the best from Kent and a thunderstorm! 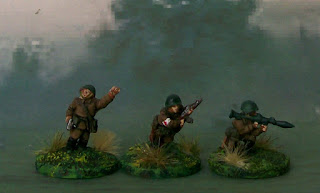 As I did actually finish these last week I though it about time to share them. All the previous comments about nice sculpts but poorly cast with lots of moulding lines still hold true and NO there is no Platoon Sniper and still too many LMGs, but enough phaffing around they are done and I can start the US/British/west German/ Canadian troops.

You can see in the first picture the platoon leader on the left then the platoon medic (Armband) and finally another (Spare) RPG heavy weapon specialist. All in all it was cheaper to buy them this way than to buy separate packs so no regrets. 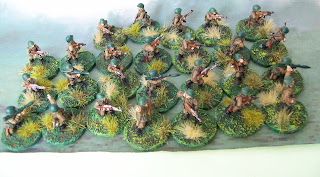 The last Picture is them all together, the force composition is a BMP Mechanised Platoon due to the number of LMGs  BUT I can make it a BTR platoon with little difficulty. Just a single pack of QRF miniatures will solve the issue and allow me to get a man portable anti aircraft missile at the same time.

The next thing is to get the US forces done and then start playing. What a shame I am getting sidetracked at the moment, following the Broadside show.

Thanks for looking, all the best and see yu soon.

here are most of the games that were at Broaside this year a couple are missing but I was really pressed for time. So I had to travel around in 5 minutes only and manage to take a single photo of most games.

As I was so short of time and as there was no map/brochure or programme for the show (there may have been but I saw no indication of any and NONE were given to me, that is for sure.

Not a lot of chit chat today but I hope you enjoy the pictures. 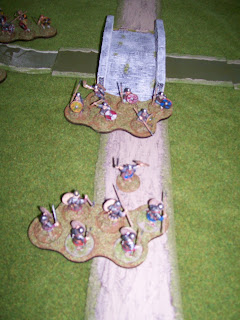 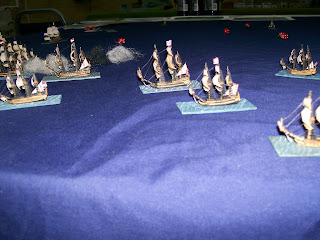 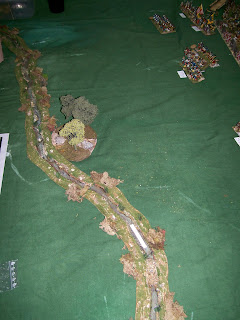 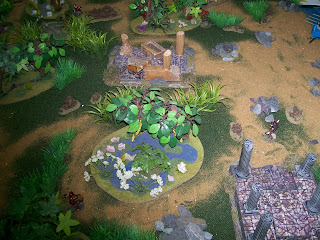 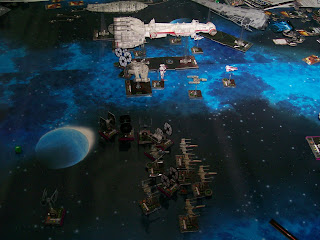 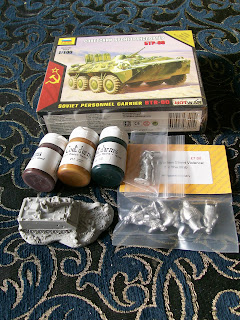 Again not a lot as my wallet is nearly empty.... actually I did take about £90 but carried most of it back home. That is not to say there was nothing there, I could have used it all up but I hardly got out from behind my table. However.... (dum dum dum! Dramatic music) I did have a very good time and met some great people, and perhaps made a few new friends. I may have even persuaded some to come to our club and some were fantastic bloggers and meeting them was one of the highlights of my day.

Yeah OK cutting the waffle, this is what I bought:

1 Zvesda BTR 80 kit. I did want a pack of Team Yankee vehicles, but could not find any at the "Right" price, so that will be an eBay purchase in the future

3 Pots of paint, just to replace paints that were running frightfully low.

6 metal 28mm figures from Colonel Bill, which are waiting for the next Analogue Painting Challenge!

1 Resin 15mm destroyed M113 Apc. This will go with my 15mm Cold war game which is in the planning.... so guess what the US troops will be driving!!!! Yeah that's right!

Other highlights include being given permission by a figure manufacturer to write a set of rule which they intend to make figures for. (And I will say no more about this until they are written OR Not written.) ..... So feel free to ask, BUT know I will make no reply on the subject.

A very Brief chat with Simon Miller about Samurai armies in his "To the Strongest" rules. he has the army lists already published and I have 2 Sam armies ready to go. He was playing a very interesting game about American Indians and Dinosaurs...... But I still am not sure I believe him when he was telling me he did not know the film "Valley of the Gwangi" one of Ray Harryhausens stop motion monster flicks.

A brief chat with Karl of Crooked dice and it looks like I will be back on the forum soon. Well quite soon after I have both changed my email address AND forgot my forum password.  He said he will set me up with a new account!

And of course walking around and seeing everyone and for a few hours NOT feeling like some outcast circus freak because I was among like minded fellows.

Thanks for reading my waffle I will TRY to do a show report tomorrow!