Quite interesting the turn sequence was alternate colours. But what happens happens.


Working from back left anticlockwise

I did think there might be some shooting this turn, alas no! Which stretches it out a little bit longer. All I can say is maybe next week.

That's it for today if the players want any more pictures just get in touch. The same goes for questions.I suspect there will be a bit more action next weekend. Movement and turning if not shooting.

Players I will need your next orders by 7am GMT on Saturday 30th August. 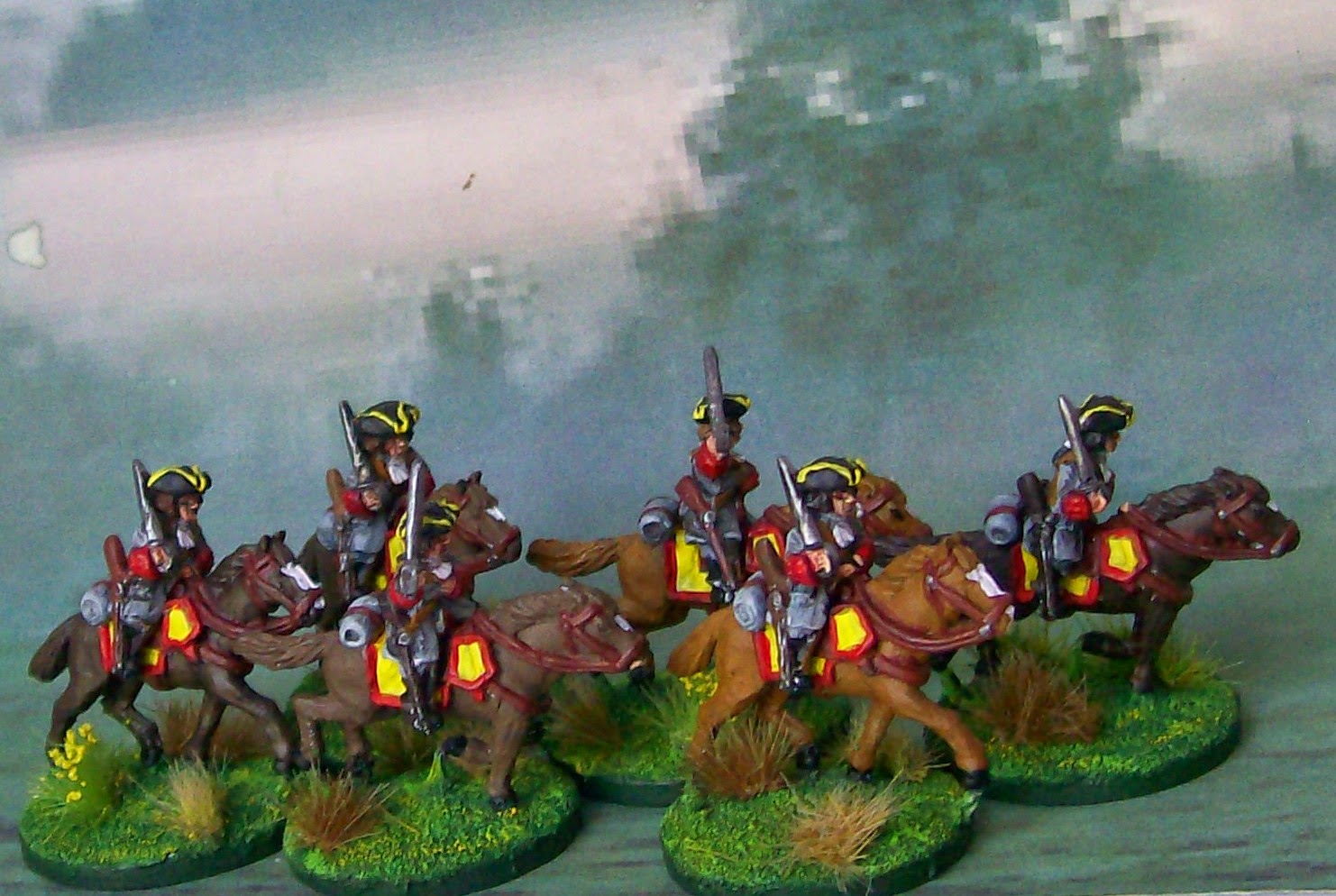 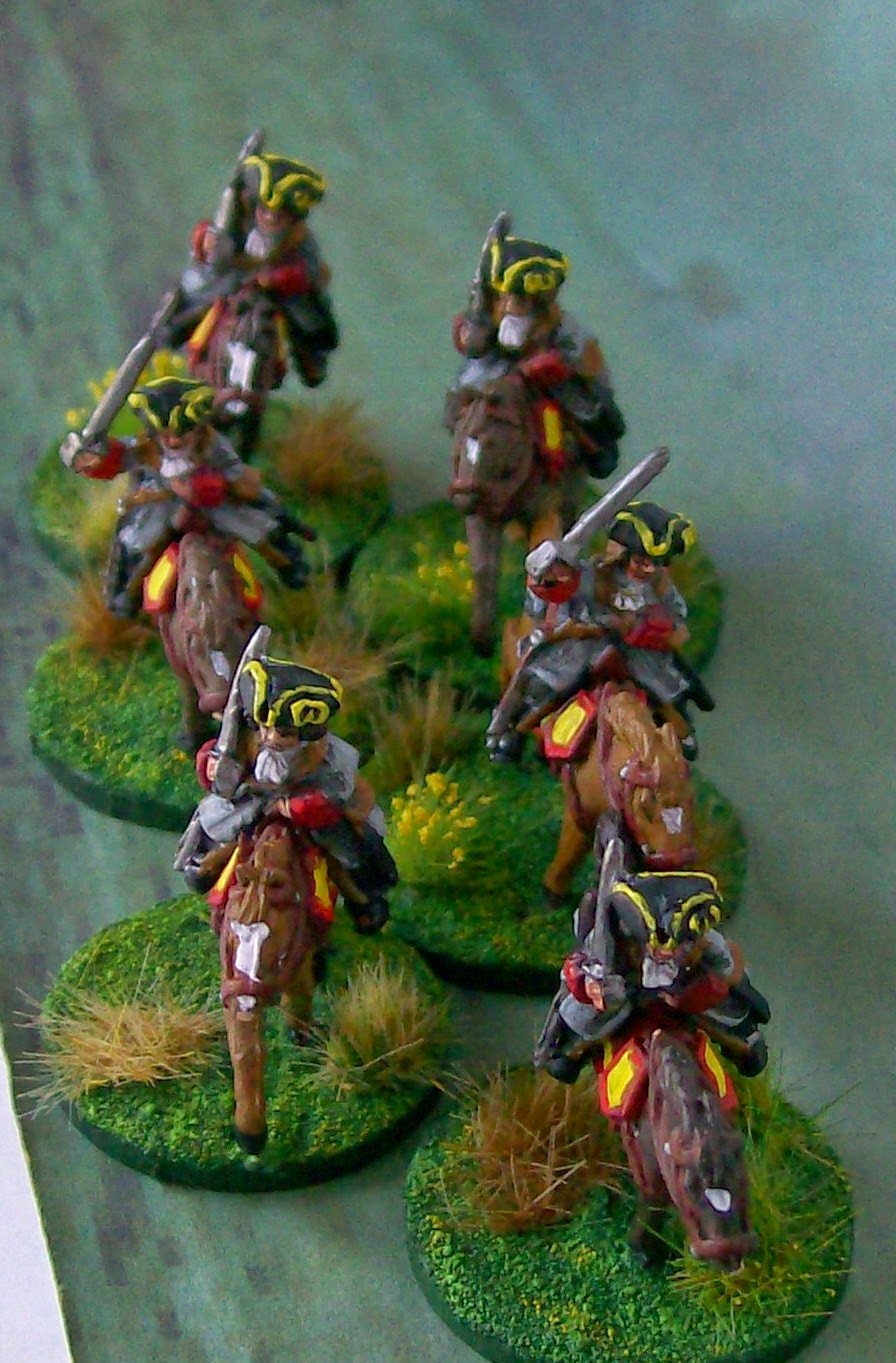 As I continue to work through my WSS figures I have finally managed to get a single point of cavalry done. 6 figures in total so I will still need to do a hero to go with them. Again these are 15mm figures by Black Hat and part of their Marlburian range. One of the things that held me up on painting these was quite simply that there are not too many pictures out there to get the right colour schemes from. But I did find one I liked in the end so all's well that ends well. I was not too sure about the yellow on the horse furniture but it has now grown on me and does help the figures stand out. In fact as a colour it pops out! Which I now quite like. (don't send me lots of links to pictures of cavalry I have enough now! But thank you if you thought to do so!)

Once I get a hero done for them, I will be 90% of the way to getting all I need done for a game. Which I hope to have on Sunday. I will not stop at the bare minimum though, as I have another Cavalry unit, and 2 Infantry units, already prepped and undercoated and sitting on the paint table and I will hope to get them done by Sunday as well. Even if I don't get them all done it will all help to build the forces up somewhat.

Looking at what Black Hat do and the prices I will expect me to send of a small order next week now that I have got a very small tax rebate. They do a Sedan chair in 15mm for example, and who could resist one of those on the battle field!

That's it for today. Thanks for looking folks and I will post the next turn of the Play by Blog game on Saturday. So if you are still to do your turns (and you know who you are) please get them back to me as soon as possible.

Email ThisBlogThis!Share to TwitterShare to FacebookShare to Pinterest
Labels: 15mm, Donnybrook., War of the Spanish Succession 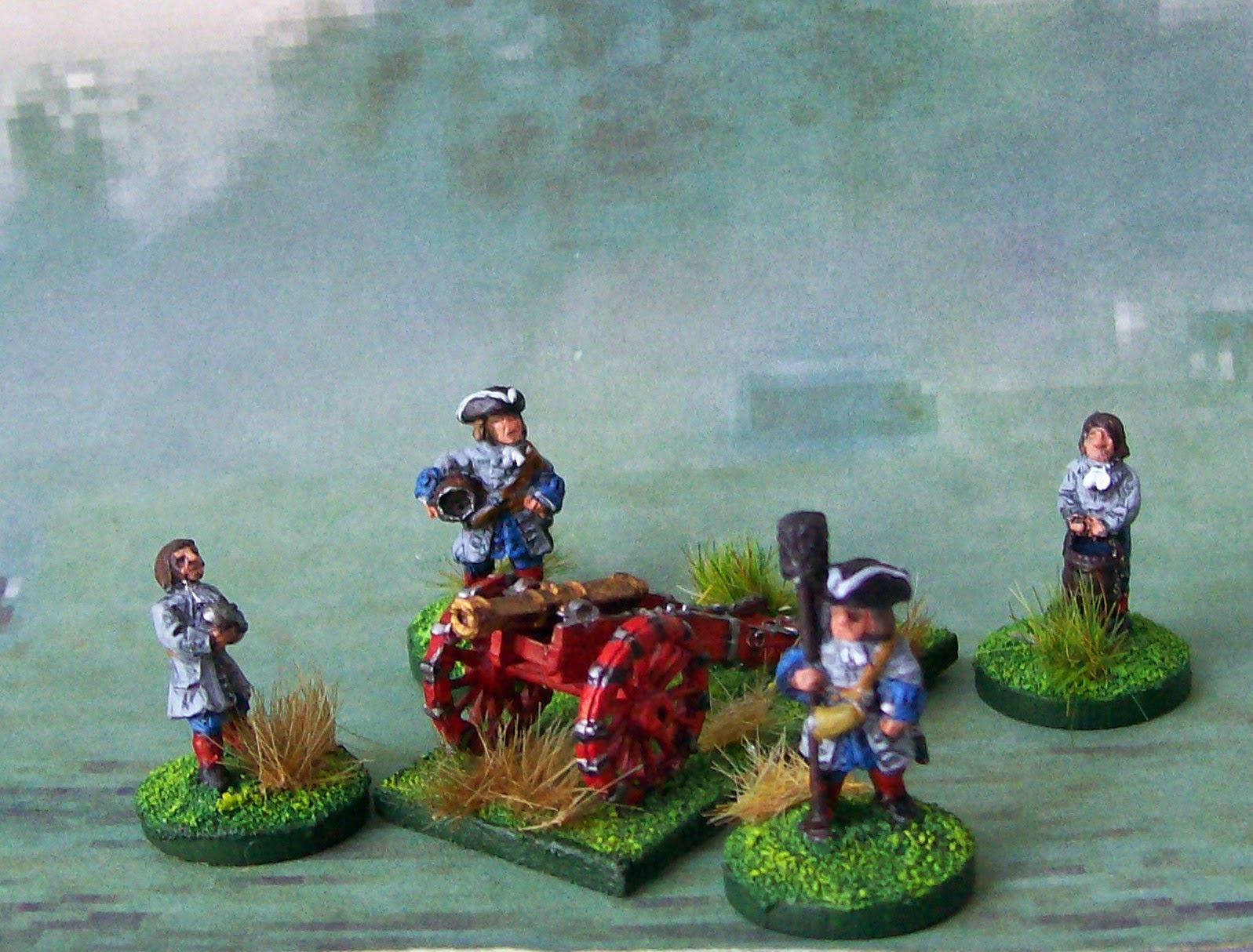 Well as I am hoping for a game on Sunday using the "Donnybrook" rules I have carried on painting some figures. As last time these are 15mm.

To start with I thought I would paint one of the 3 cannons I have as a French gun. As you can see the carriage is painted red as the French guns were at this time and the crew of four are in grey with blue facings and trousers and red socks! While this may seem strange I have found a French artillery crew of this period dressed in this exact way. I must say that not all Artillery crew were uniformed in the same way so expect some variation in different players troops. 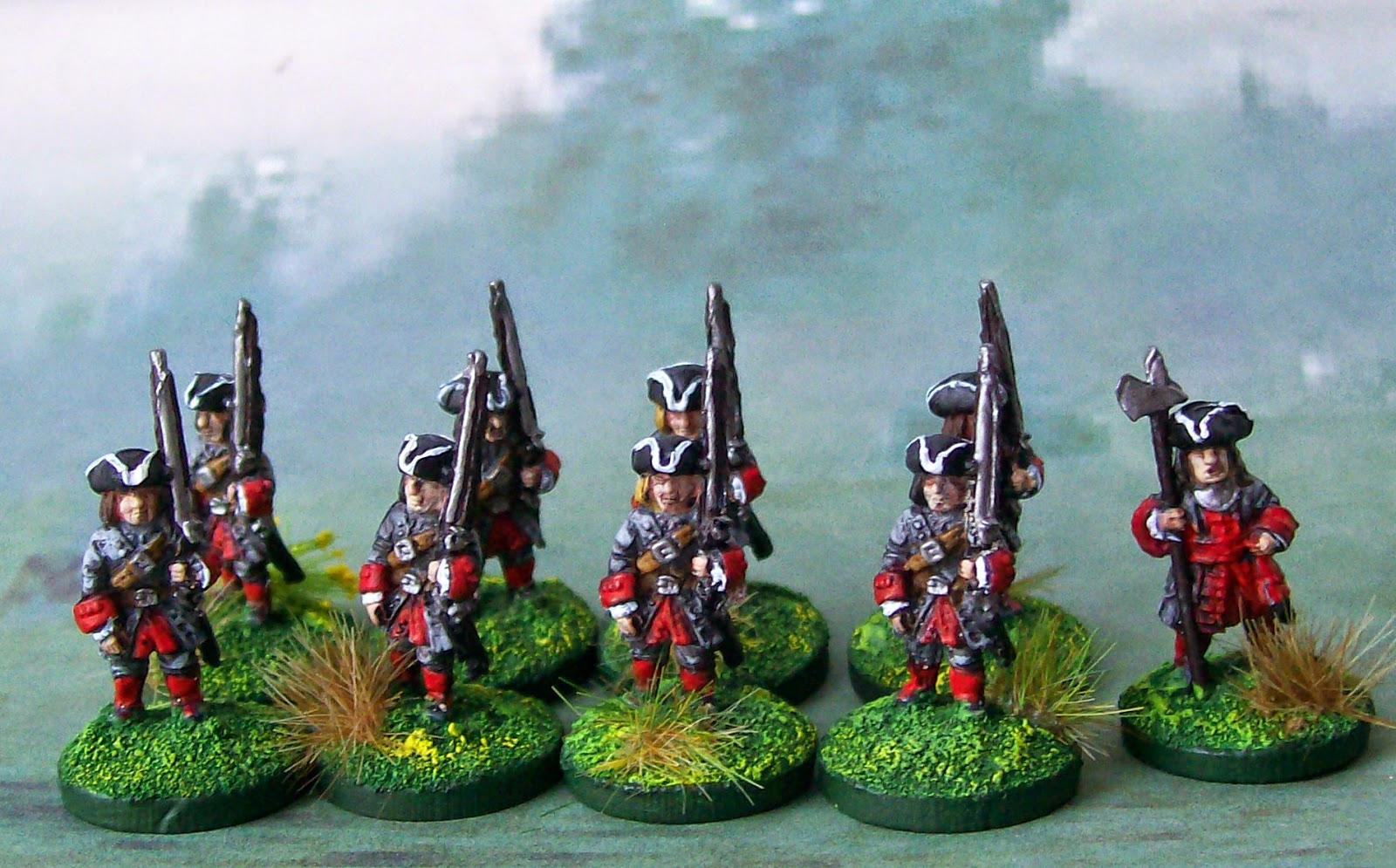 My next point is a group of French regular troops. Again in grey but this time with grey trousers. Collars cuffs and socks are Red this time. Again I would expect some people to quibble about which unit this is, but as they are not in my club generally I don't care. Sad but true. So there are 8 troops in close order with a Sargent carrying a halberd.  These really are the simplest troops I have to paint so I would expect some more of these. 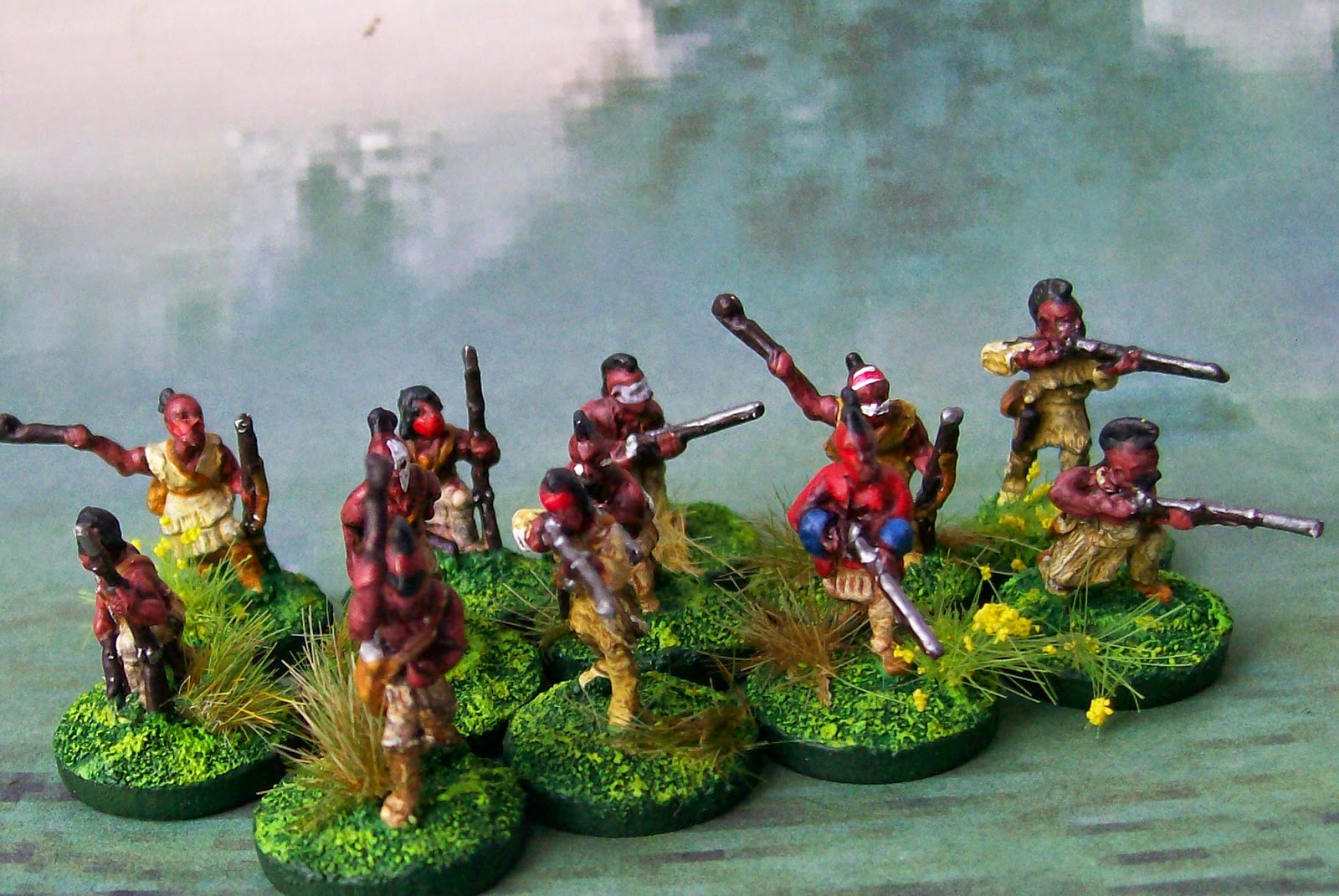 Mostly dressed in buckskin I have 12 native Americans. As the indigenous peoples were used by all sides as allies it makes sense to have some native Americans In fact I should get some more. I think another 2 packets (16 figures) would be a good place to start. These should have less  muskets and more hand weapons but for now as I am using what I have I must say I am pleased with this unit. I have kept the war-paint to red, black and white just for simplicity. I could of added yellow war paint as well but I wanted to keep it straight forward. There are 12 figures here. I am one short of a unit if I want them to be a rabble, as that would be 13 figures. Or I could use 9 of them as more proficient troops. 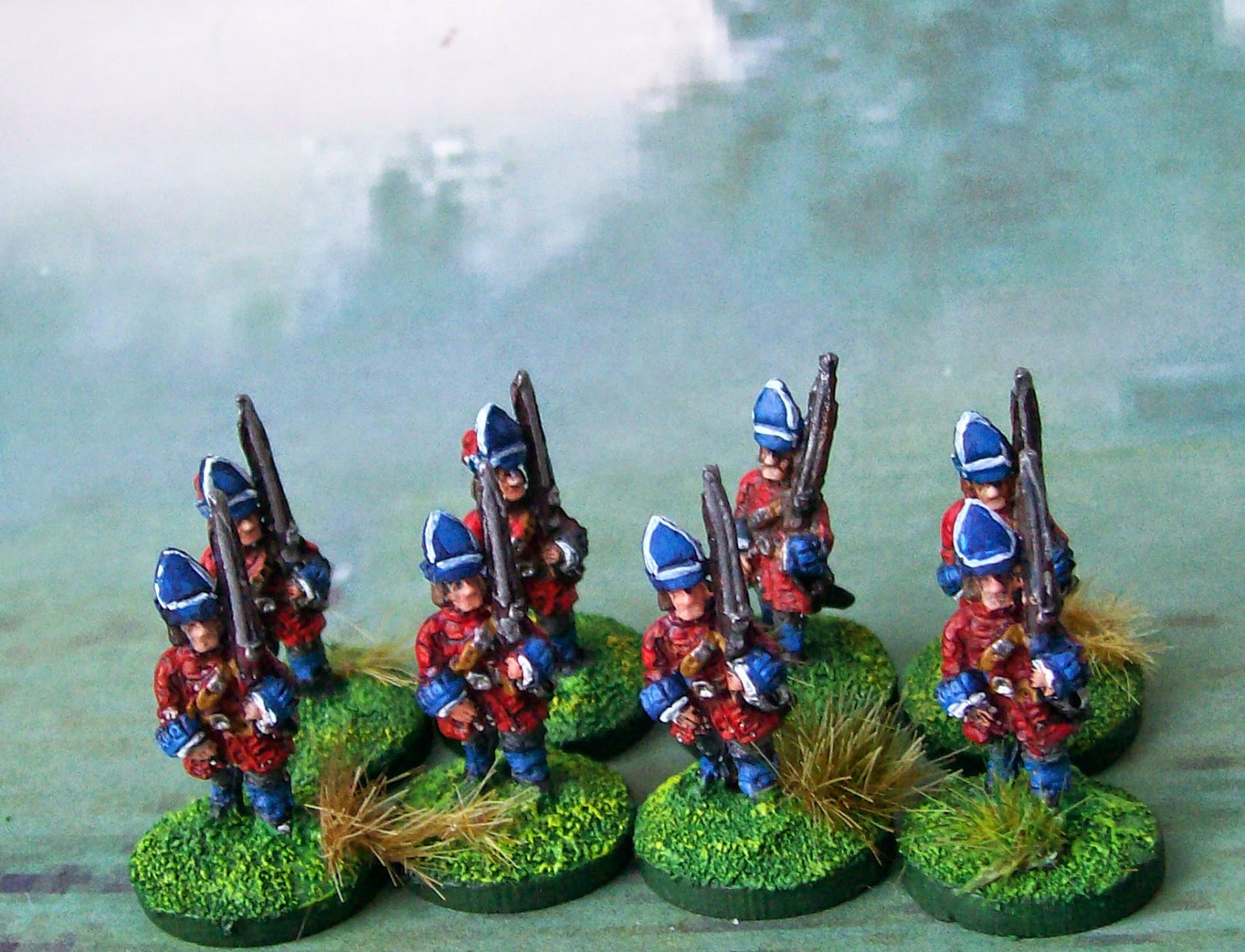 Lastly I have added 4 extra Grenadiers from last time. This will allow them to be trained and not elite troops should I choose. So these last troops are British. Again I will get some French grenadiers (Fur Mitre) so expect me to get some of those at either the next show or even mail order some.

That's it for today, I have some cavalry on the paint table for this so they will also be coming soon.

That's it for today, thanks for looking and with luck next post on Thursday.