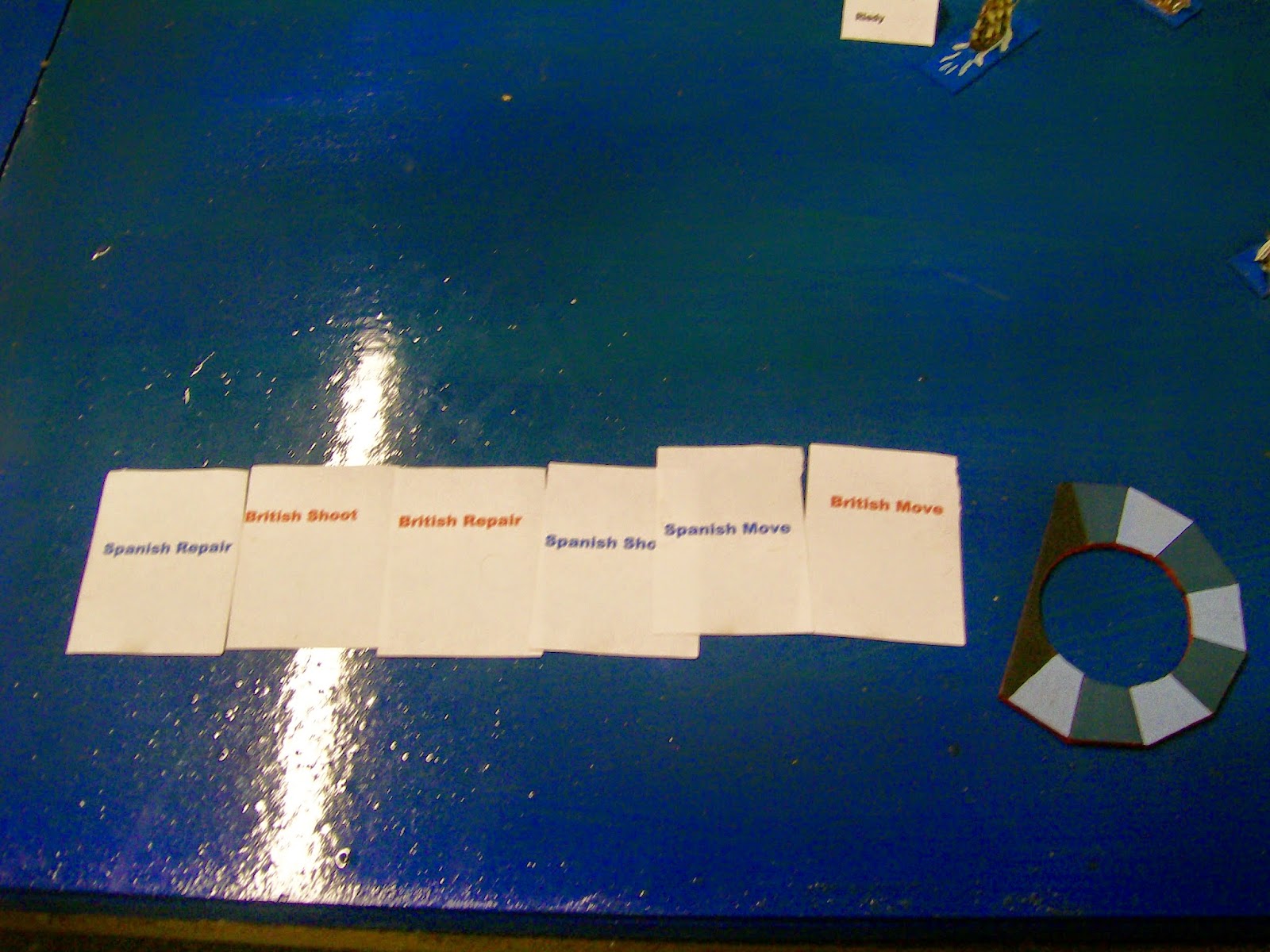 Yes It's that time of the week again. And here are the latest turn results.  As you can see from the turn sequence all the movement happened at the end of the turn which has not been so fortunate as some people would hope.

I WILL NEED TO DO NEXT TURN ON FRIDAY29th November 2014. A DAY EARLIER AS I AM BUSY ALL NRXT WEEKEND> 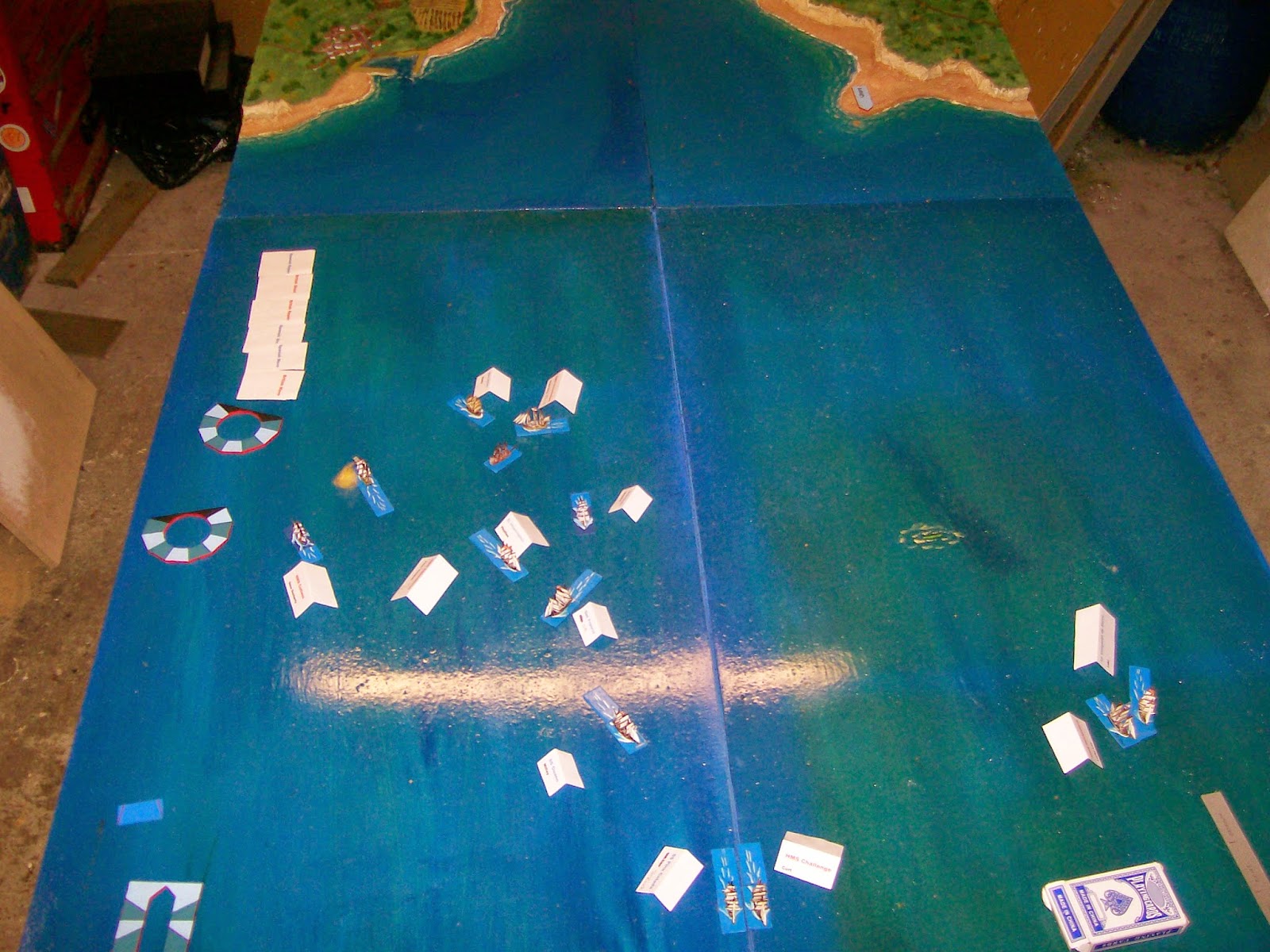 The overall picture of the board. All the pictures following this are taken anti-clockwise starting at the back left. 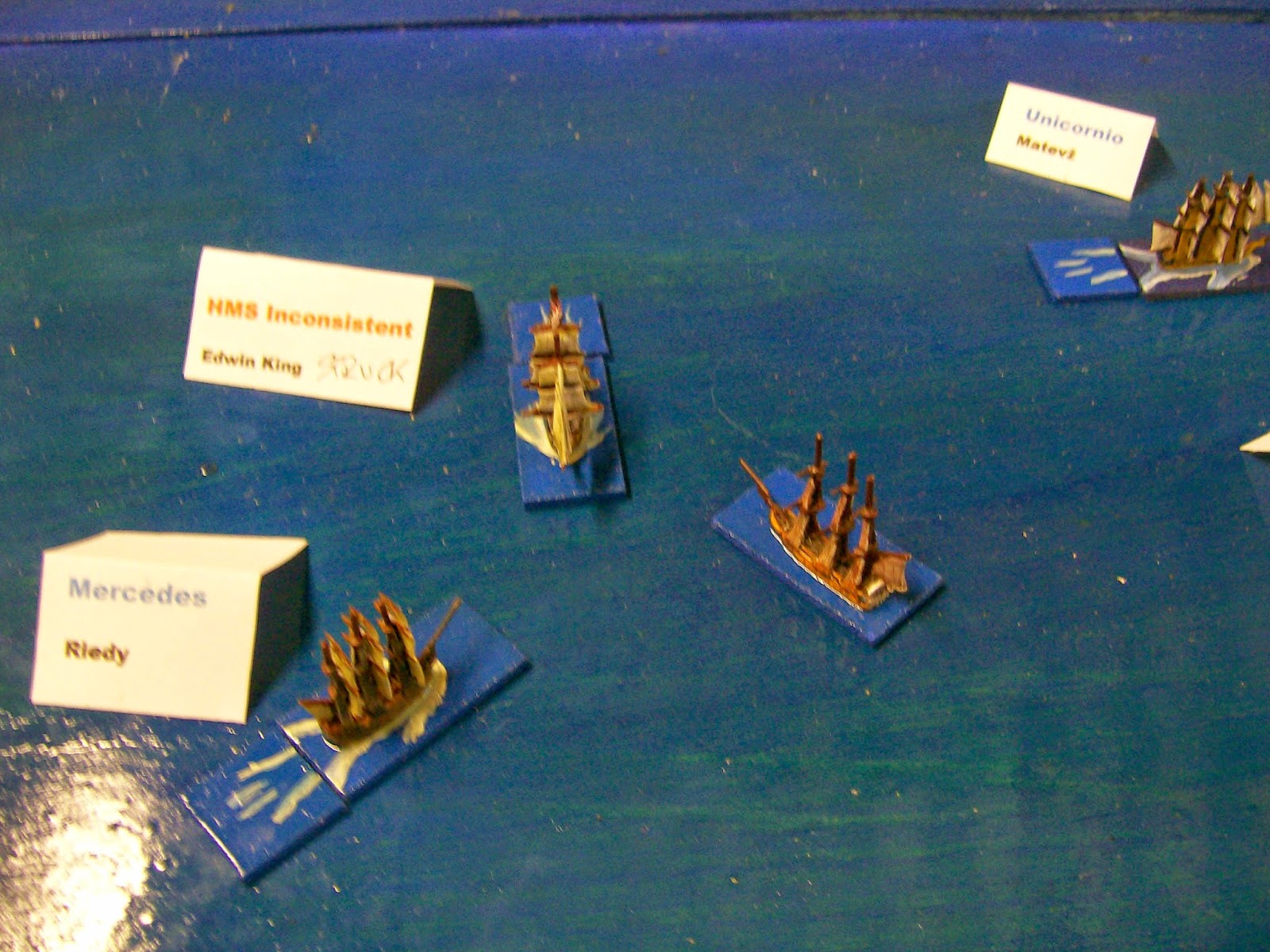 Firstly we can see the Spanish Frigate heading towards 2 prizes. Is it possible that they will be claimed for Spain! If so Don Reidy's crew will be rich indeed. 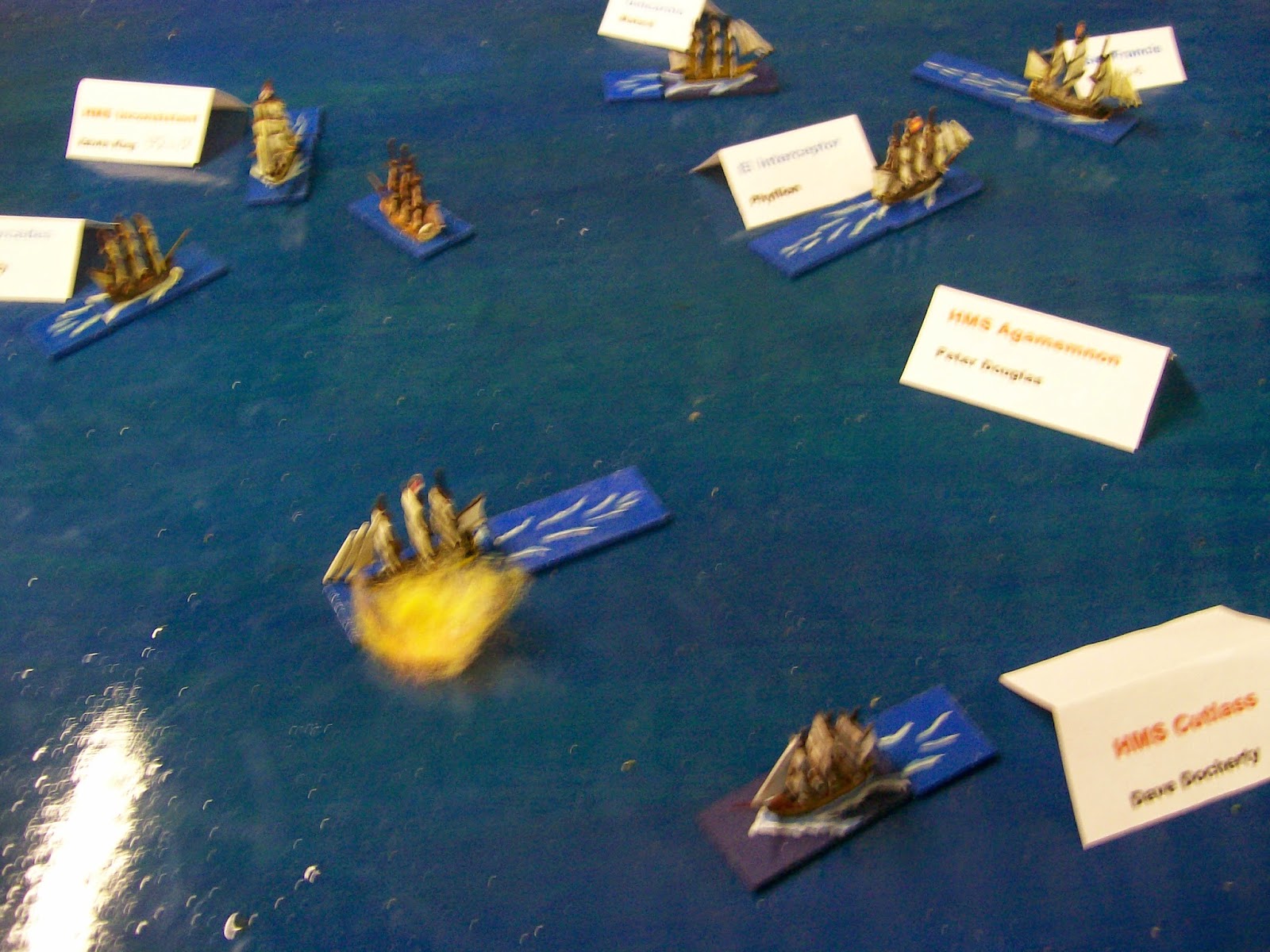 Don Reidy is not totally in the clear though as HMS Agamemnon may have different ideas. And may turn on "Mecedes" 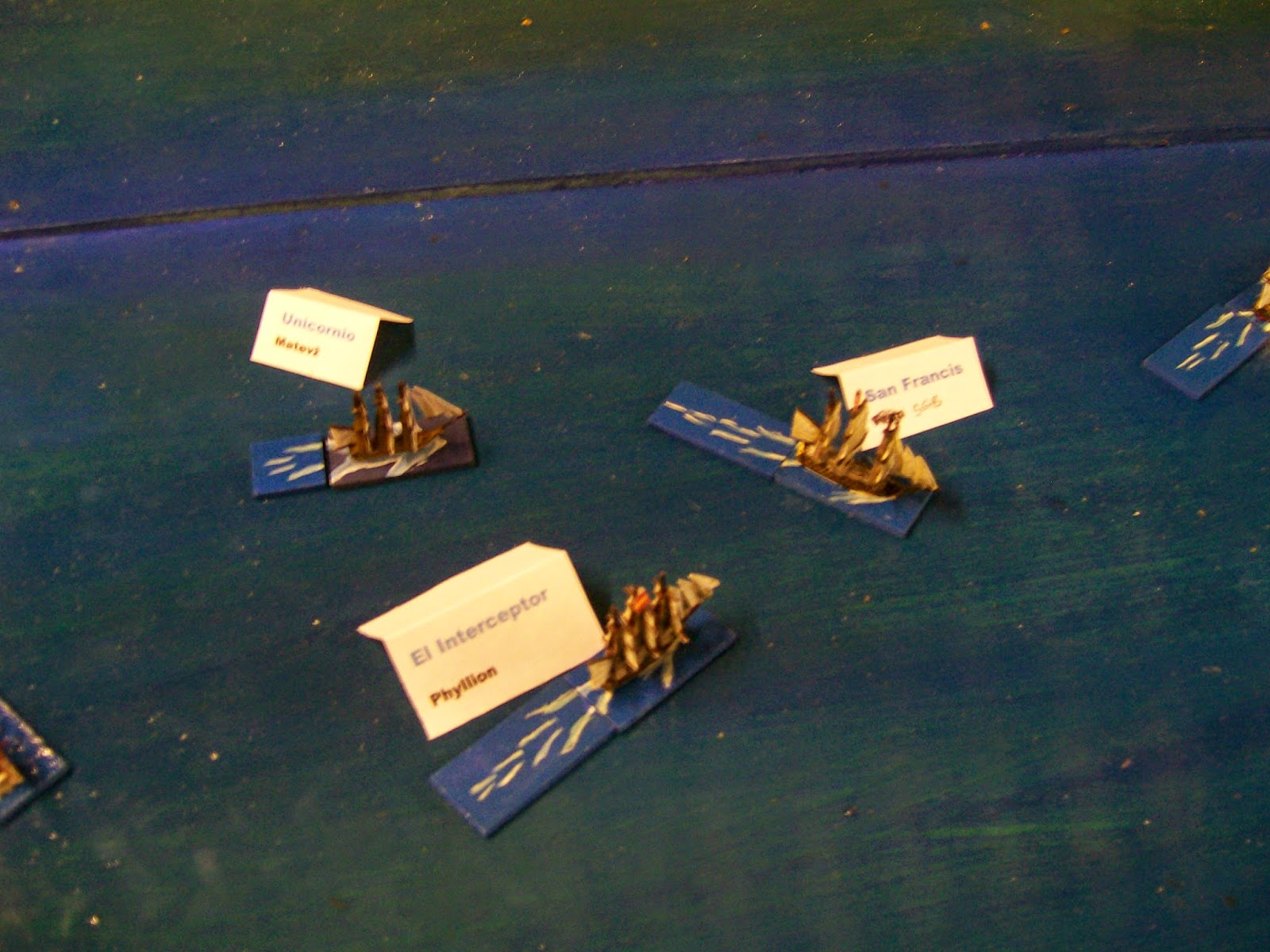 These 3 Spanish ships may have slipped past the British. Or they may circle back to bring more destruction. Only time will tell. 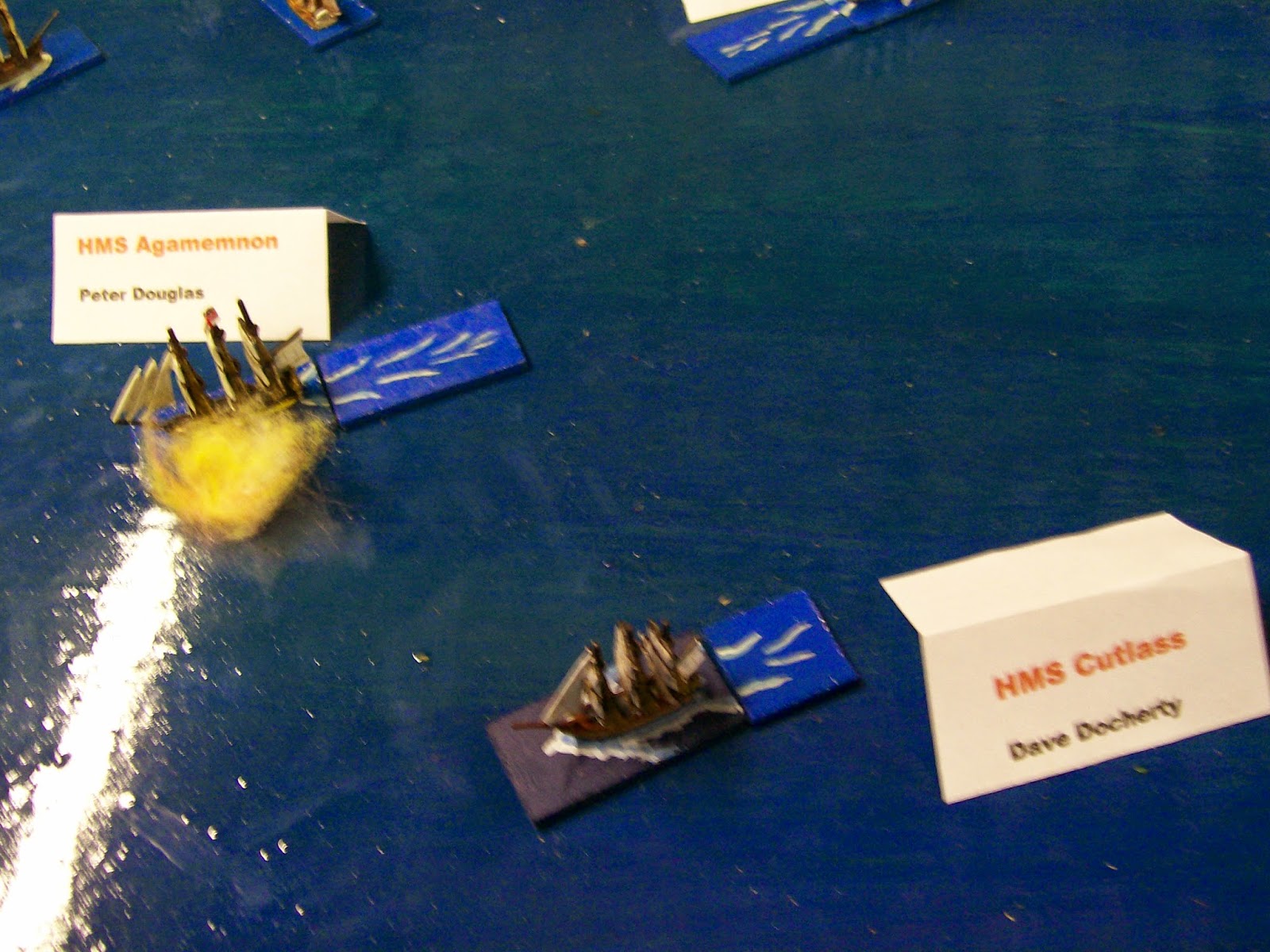 A fire was extinguished on HMS Agamennon last turn and has started again this turn due to El Interceptor as both ships exchanged broadsides at short range. 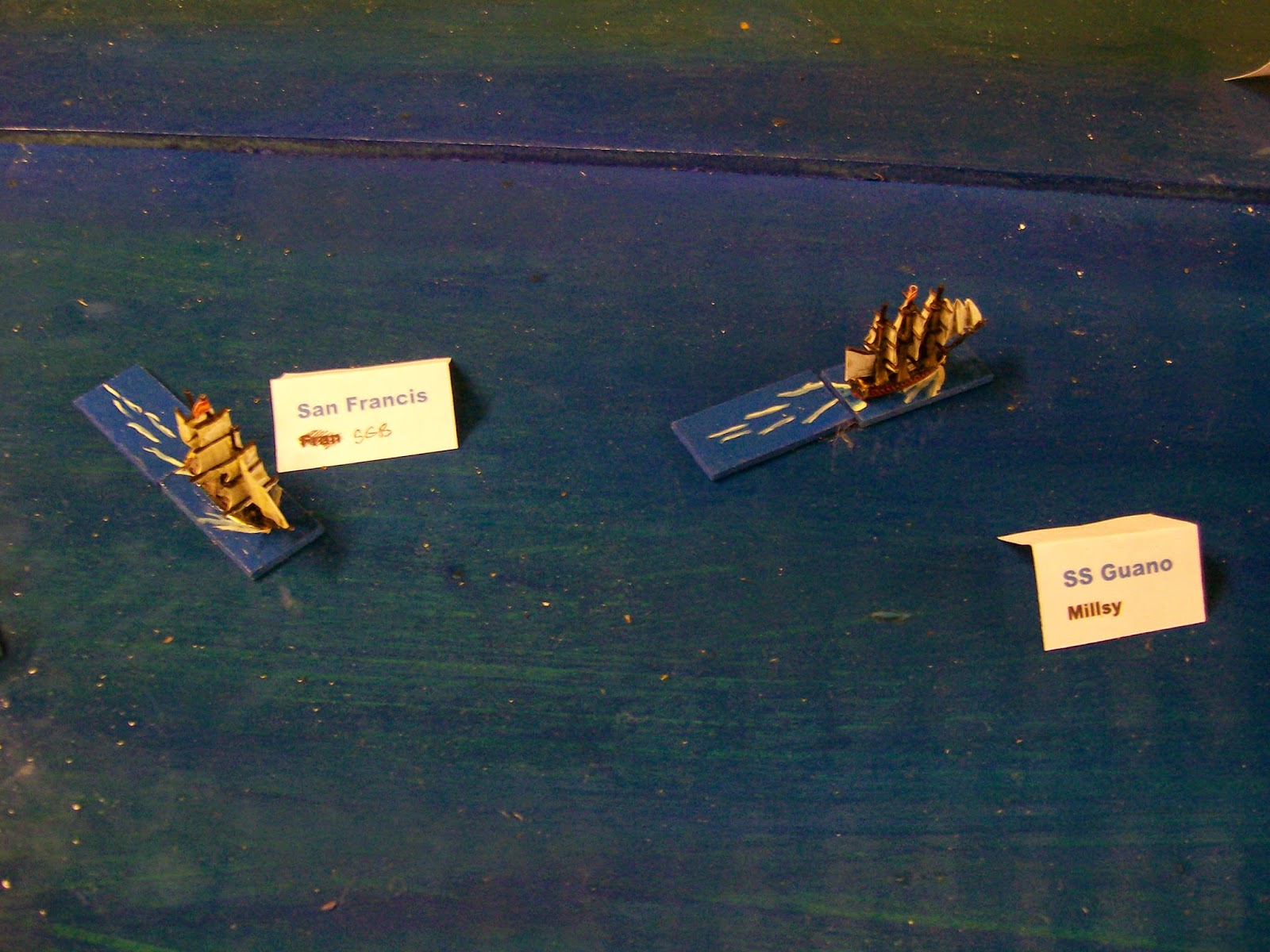 Both Seb and Millsy are past the British and one of the two is heading to HMS Challenge with mischief on their mind. 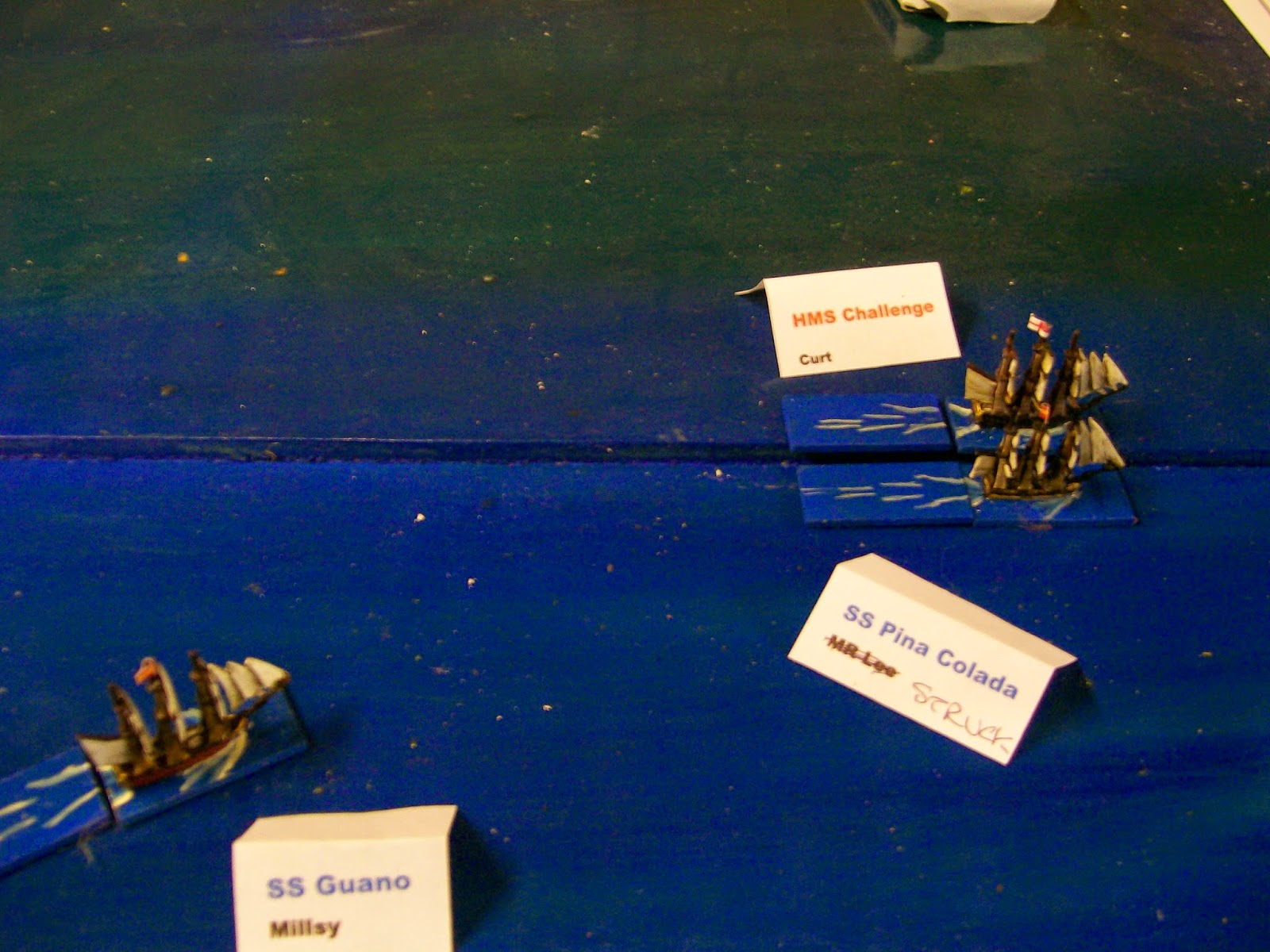 Captain Campbell and Senior Lee are still escorting each other from the battle, neither is strong enough to claim the other as a prise or weak enough to yield their own ship. They have literally fought to exhaustion and lack enough crew now to decide the contest. 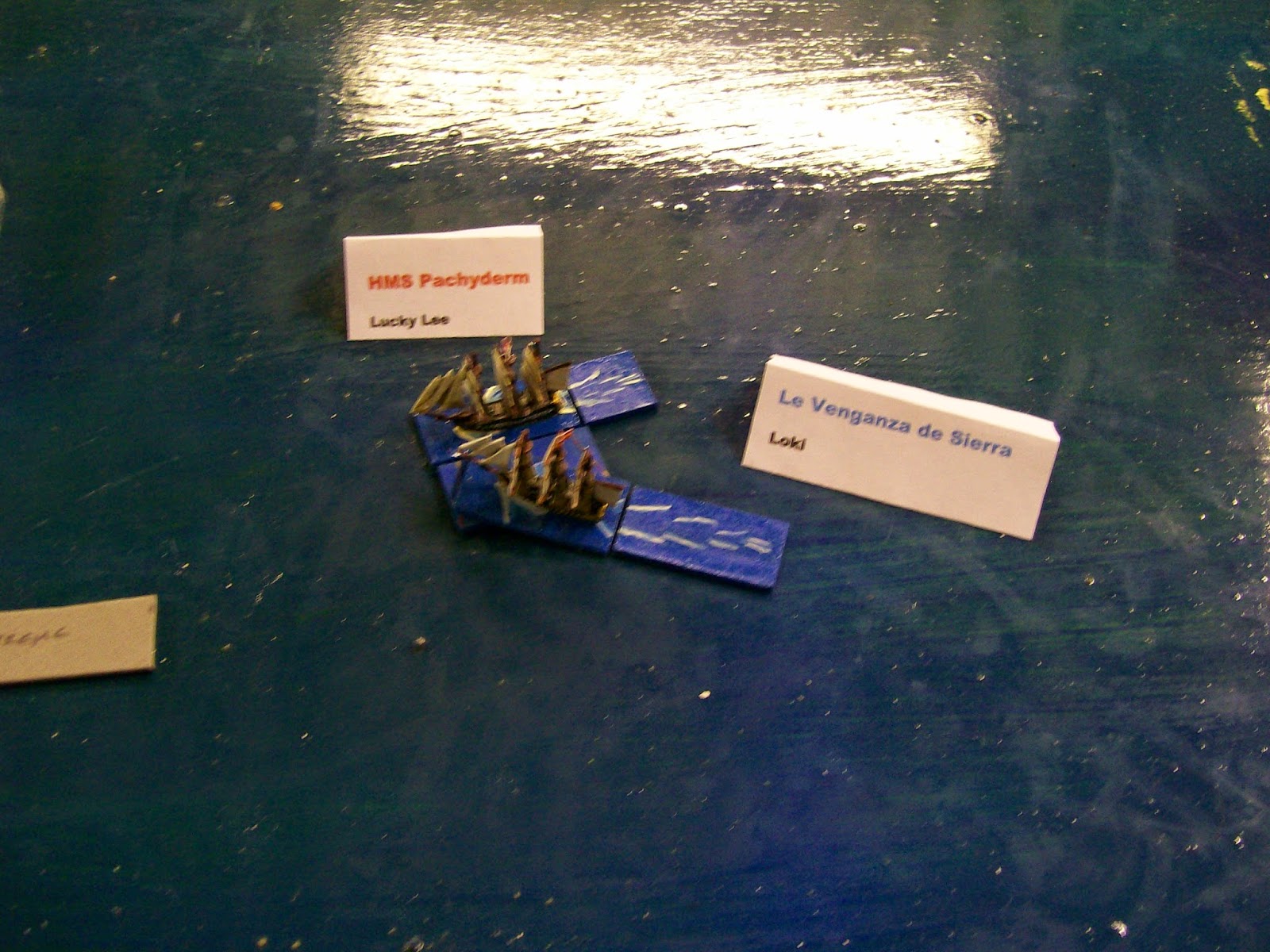 OK folks, that's it for this week but REMAMBER>


Next turn is on Friday as I am busy all next weekend.


All the best to you all. Have a good weekend.

Let's start with the Gepard (Cheetah in English) a German anti Aircraft tank. As you can see it has lots of radar as well as two rapid firing cannons.

I only ever bought 2 of these as I have never been too excited by them for some reason. Which seems strange to me as they are quirky enough for me to like the look of them.

In the cold war period 2 of them can be attached to a headquarters to act as anti-aircraft support. so they should function well after all no reason not to use the guns on soft skins as well. 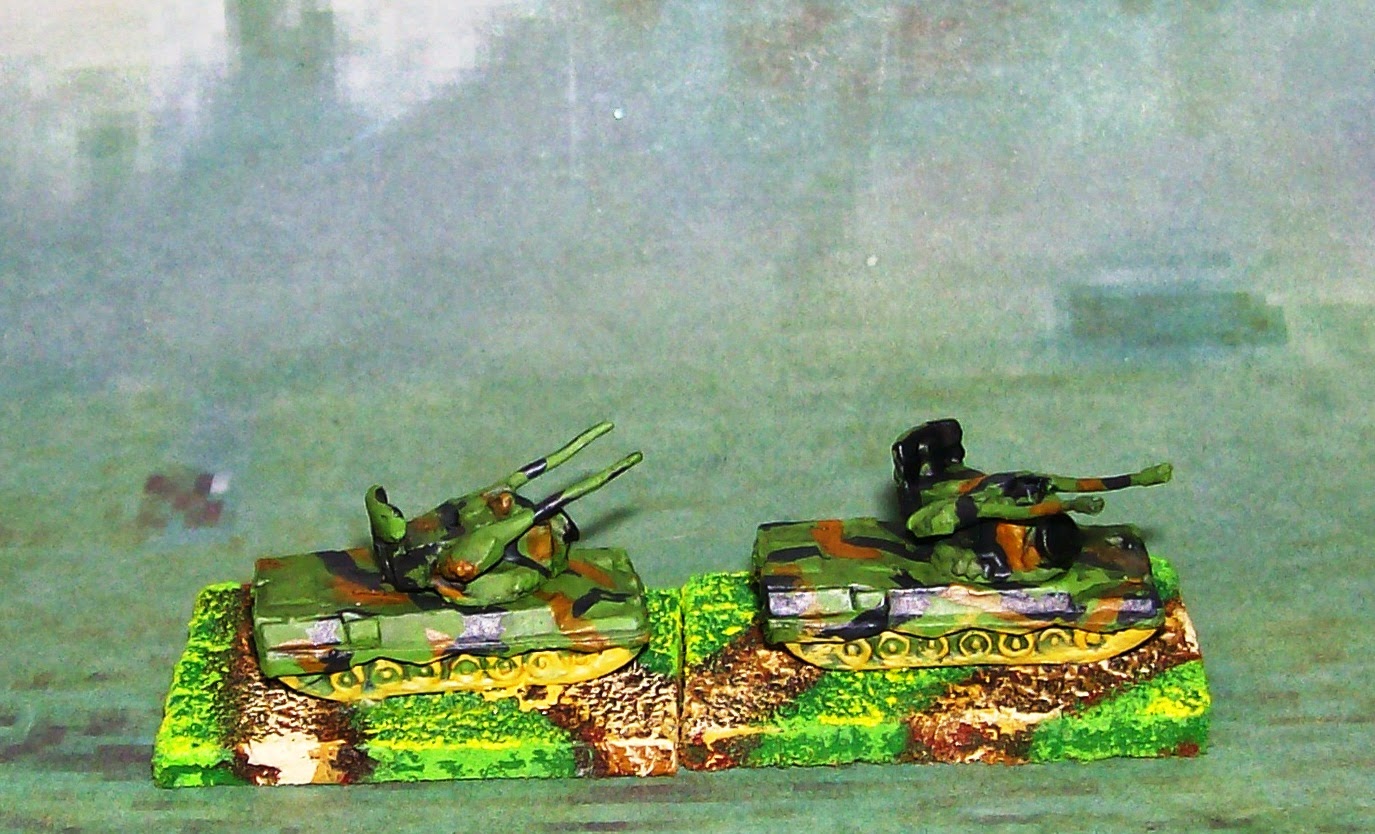 Next up two M901 TOW launchers. Tow being an anti Tank Guided weapon. While I can't find them in my TO&E for mid 80's cold war German forces. They were/are used by several different armies so I suspect they could be on the battle field. The one in the picture I think is Japanese but I am not sure. The Germans tended to use Jaguars with Milan or Hott missiles. So I shall do some of those pretty soon.

Clearly the basic carrier is an M113 which has been adapted to an anti-tank role by carrying TOW missiles. 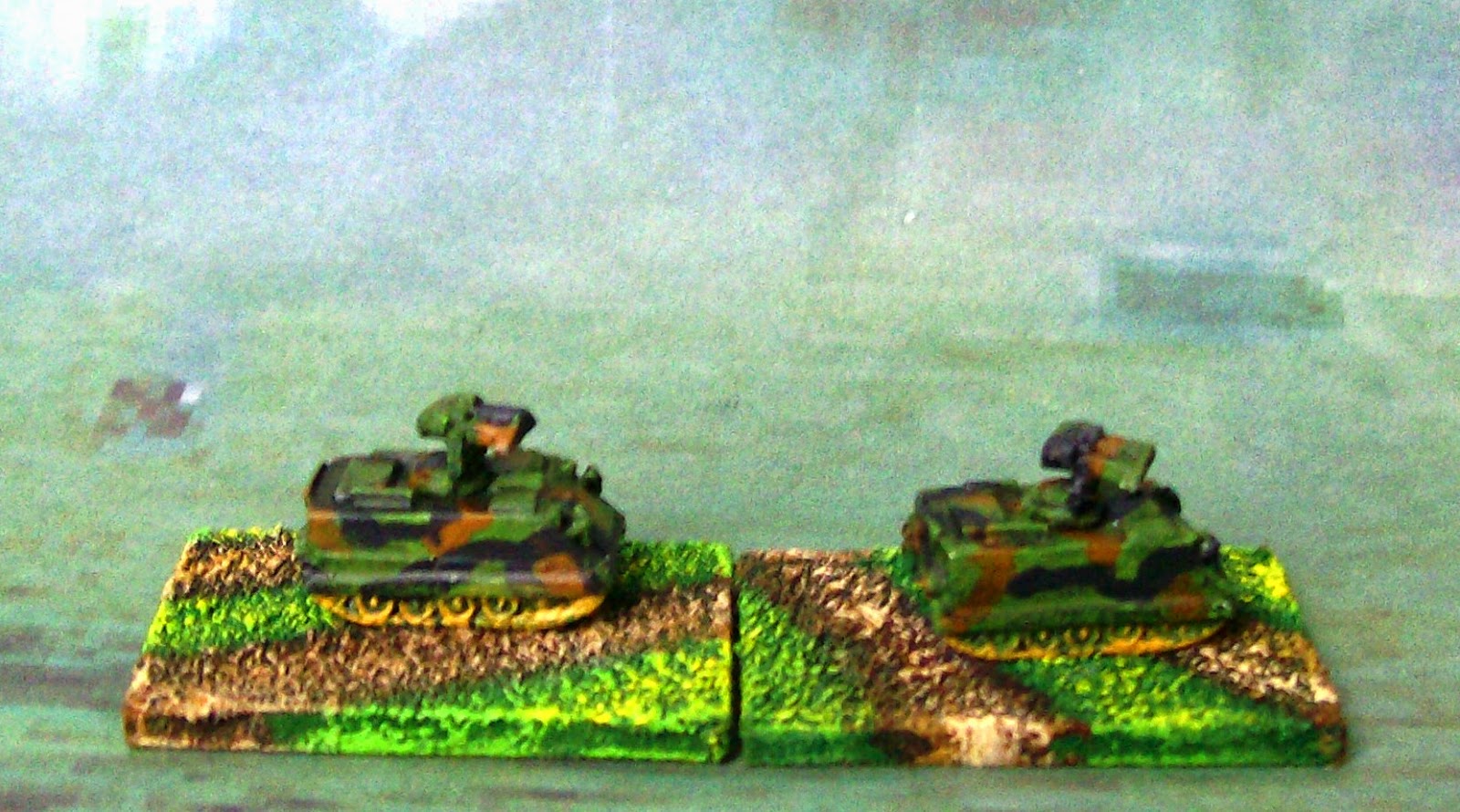 Finally for today here are 6 Mann trucks for Logistics support. In games where the vehicles are so small there is no need to just concentrate on the fighting vehicles. I feel that logistic support is something vital to the battle field if only as targets for the opposition. I would strongly state that they are more than just targets though for without them the battles could not be fought as all sorts of supplies would run short very quickly.

So here are 6 of the beauties all ready to transport things to and from the point of FEBA (Forward Edge of the Battle Area) . I have misplaced the canvas tilt on one but that all adds to the variety of the beasts.

All these figures are about 25 years old to me (possibly older) and originally came from Heroics and Ros a company I believe to be still going. I would encourage anyone wanting to do this scale and era to do an internet search and I am sure you'll find them with little difficulty. I Believe they were at the Salute show this year so I am sure they are still active.

That's it for today, thanks for looking. All the best Clint 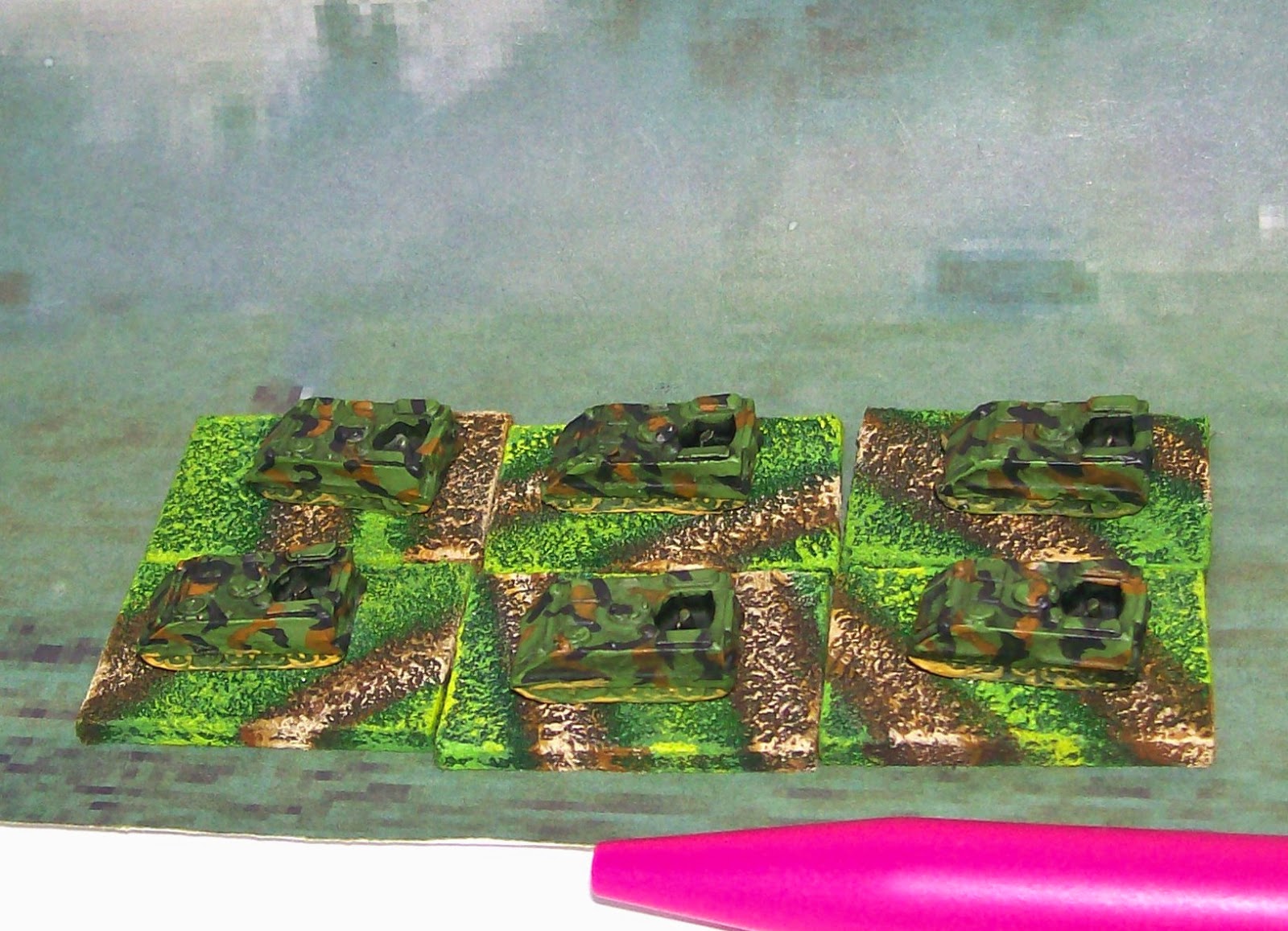 Yes I continue to re-paint my 1/300th scale stuff from about 25 years ago. Today being the M106 mortar carriers. These are M113's but carrying 120mm mortars which provide close support on a battle field with what we consider heavy mortars. The advantage clearly is that they can carry some ammunition as well as move without the need to set up each time. Thus it makes a "Shoot and Scoot" tactical doctrine far more possible.

As Mathyoo wanted something to scale these figures I have included a neon ball point pen in the foreground of the first picture. With luck this should give him and everyone else an idea of just how small we are talking with regard to this scale. As you can see 6 finished in total which should be more than enough for a game. If you are struggling to see them I would remind you that they are camouflaged.

I have finished a few other vehicles as well but not sufficient to make up a full unit of anything else. So I will continue today to expand these up and with luck another unit will come to fruition before too long. I am enjoying these as they are a small and easy thing to complete in a day (The bases take MORE TIME THAN THE VEHICLES).

Thanks for looking and with luck more of the same on Friday.

Post script: I have been struggling to get an "Anti Hero" for the Analogue Painting challenge . For me the definition of an "Anti Hero" is very vague . A hero that is flawed. But surely everyone on the planet has some character flaw.

If not I have yet to meet them.

So It needs to be a flaw that the author (or Tv/Film Company) highlight. It seems to me that another author might not think of this flaw as a flaw at all.  Or that things we once thought of as a flaw such as being Gay (in the 60's), or owning slaves (if you were a Roman)  Might not be a flaw at all but more a response to the times we and they would live in. I hope this explains my dilemma in selecting an "Anti Hero".  But I have at last ordered one and I hope it will be with me shortly. Is it an "Anti Hero" that's up to you to decide I think.

No AAR. Just some Armoured cars. 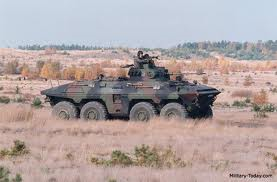 What, no AAR? Nope not today.  Tim was going to put on a beneath the Lilly Banners Game on but due to family problems was unable to attend. SO I was invited into 2 other games but just could not get my act together enough to get involved, so I didn't. 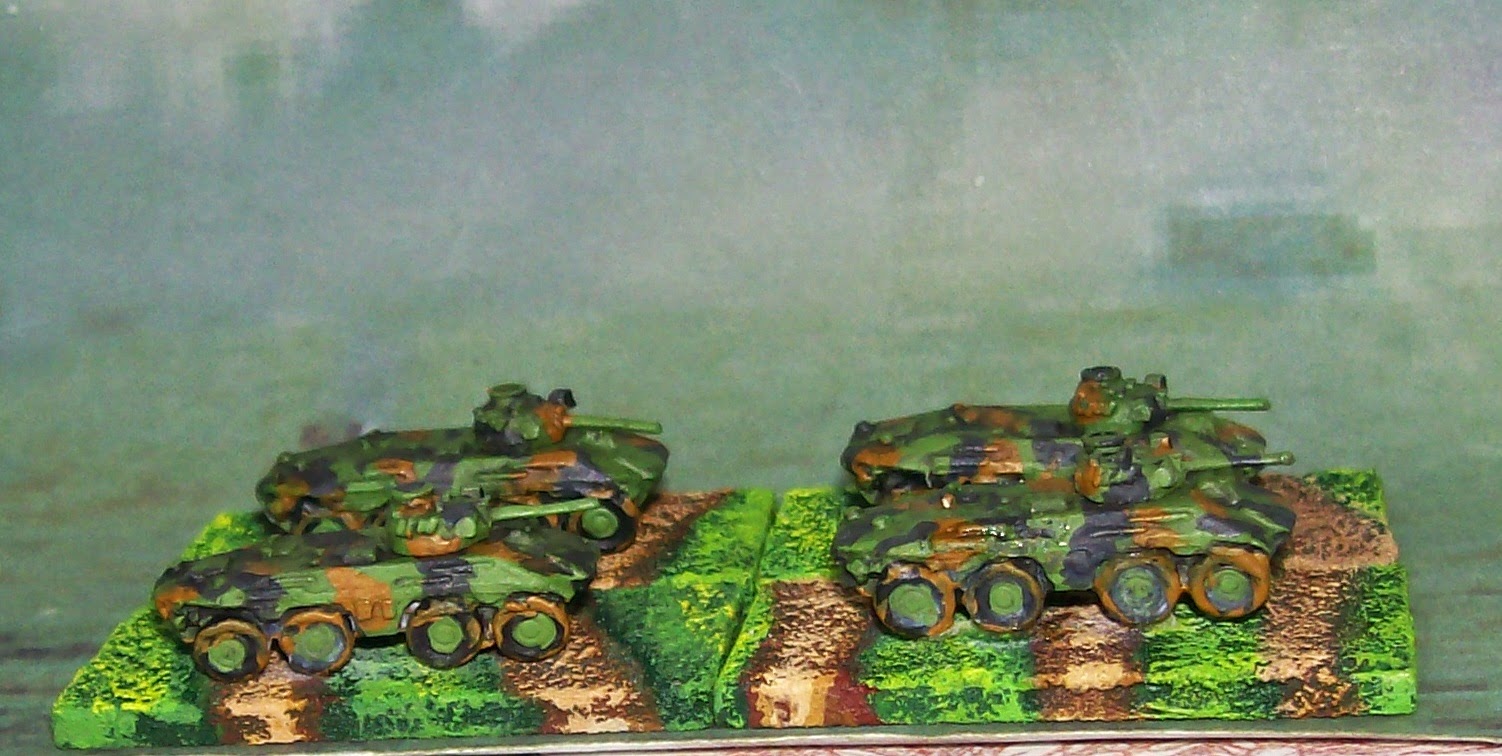 So I went home and repainted and rebased some old cold war figures. Those of us of a certain "Vintage" will recognise the German armoured car known as the "Luchs" or Lynx in English. Pictured to the right is a real one. It's not a fluffy cat by the way as you can see it's an 8 wheeled armoured car. 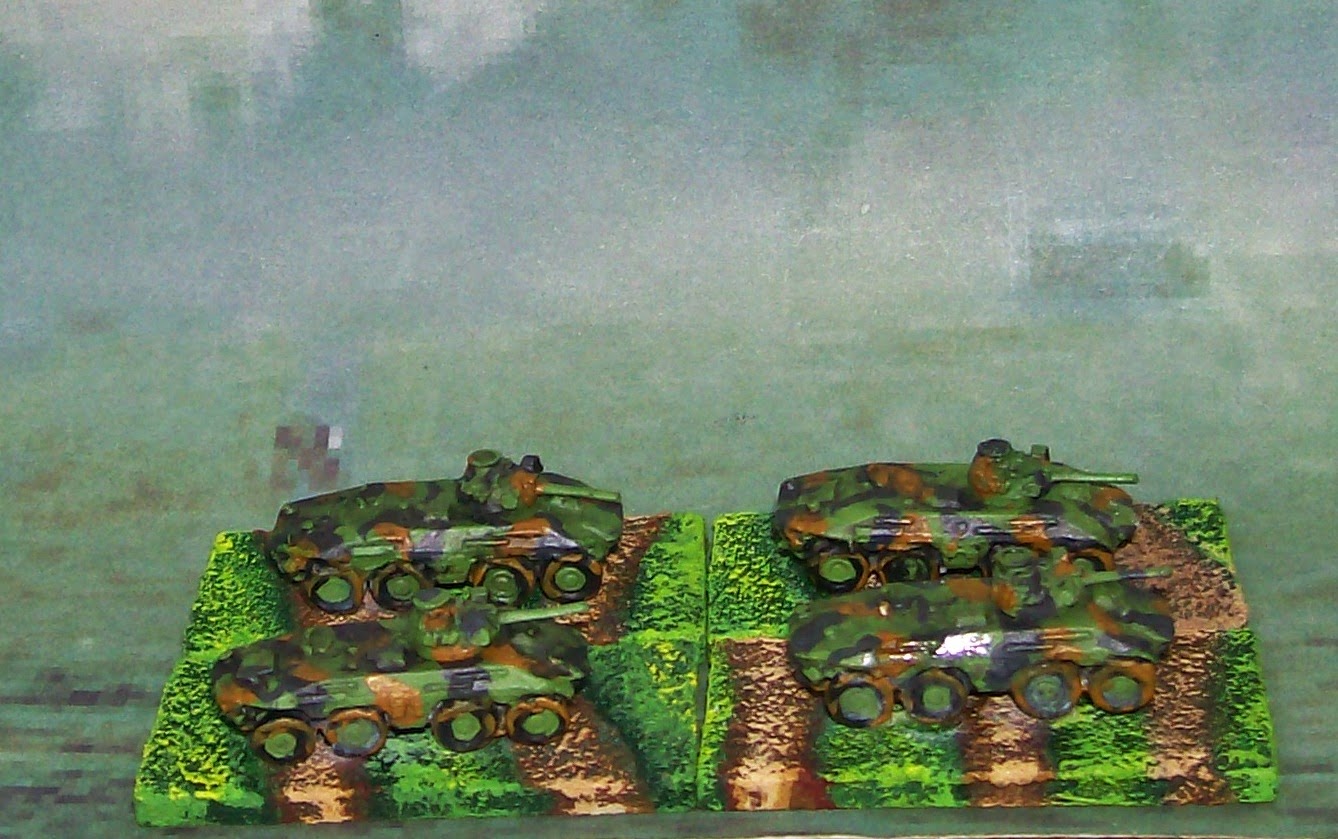 Here are 4 of my own. The real one is to show the camouflage and the model ones are to show what it looks like on the table top. You may remember that a few months ago I finished my cold war Russian Desant troops and know as you can see I have started my German troops. If you follow this LINK It will take you to the Wiki page and you can read all the details of it if you wish.

No Not quite the same photo, this one is at a slightly Higher angle and the flash has caught the side of one of them. (Naughty flash naughty).

The vehicles are Heroics and Ros who are still going and are in 6mm or if you prefer 1/300th scale. (1mm to the foot in old scale terminology).

There are plenty more to do but I had to start somewhere and reconnaissance just made sense.

That's it folks, thanks for looking today. All the best Clint