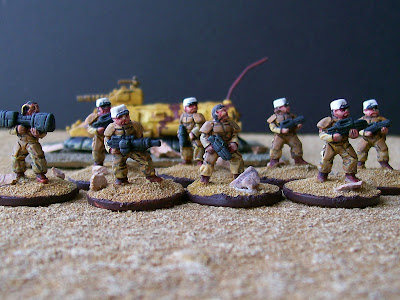 Let's face it we all knew this was coming so it's no surprise really. This is the second squad of 15mm FSE troops from GZG. Same unit composition as last time. These guys however are not in helmets but the famous "Kepi Blanc" I did think about painting the kepis a different colour for about 2 seconds so as you can see it was a very serious consideration. Having used white undercoat I managed to keep them clean enough to make the white really stand out. Other than the kepis they were painted exactly the same way. 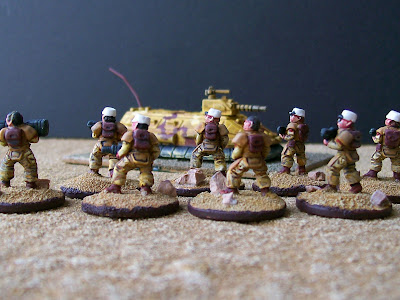 I will have 2 more squads to finish the platoon, a 3rd Infantry squad, a power armour squad (not sure if they get transport yet so I'll leave that out for now) and a command section in a command version of the Hover vehicle. They will not be down this week as I have yet to order them. You know I'll show them when finished, but I need to paint a few other things in between. No idea what yet, you'll know when I know. 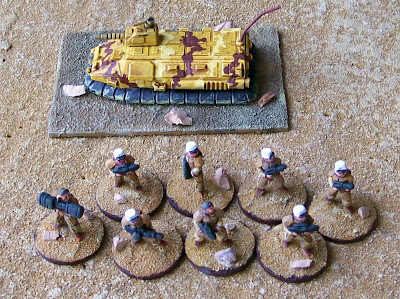 The big problem is the lack of time this week, real life was getting in the way. Not only have I looked after my nephew all week but I have also managed 15 hours overtime. James, my nephew is pretty good and does not get into trouble and can amuse himself (well sometimes) so I can manage a very little painting at some point each day, even if it is only for 10 minutes. So I can't really complain.
I will be running a ZOMBIE game at the club tomorrow. So expect an AAR on Monday. Another short post today for all the reasons listed above. For now though there is an ice cream with my name on it calling for me. So Thanks for reading and Zombie AAR on Monday, (I hope... that's my cue to forget my camera of course). All the Best Clint 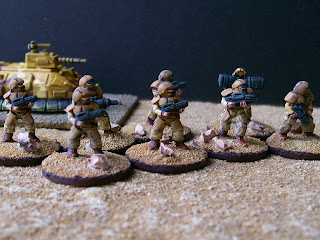 Not a huge amount to show today. It has been one of those weeks were I just can't get too much done. Enough excuses. Here is my first squad of 15mm FSE Stargrunt infantry. 8 figures in all. 6 armed with a standard FA-75 Standard Gaus assault rifle. It has less fire power than many of the firearms but a better impact so is generally on a level with other small arms. There is also a Squad automatic weapon (FA 77) and a Mistral portable guided missile launcher. I realise that if you do not play a lot of stargrunt most of this will sound meaningless. This is the standard FSE squad in the rules and is the pack composition from GZG. 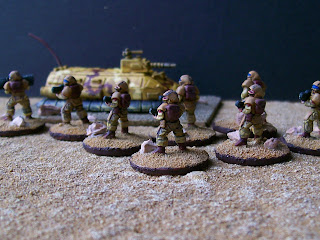 FSE troops come with a choice of head gear, these as you can see are helmeted, the other choice being Kepi. I have a squad of these as well and they should get finished today. No promises, but that is the plan. The transport hovercraft was included in the pic just for completeness, as it will be assigned to each squad.
Elsewhere in my games life I have collected some of the wooden off cuts from a neighbour, and hope to get to work on Sunday's proposed zombie game later today, but currently waiting a phone call from work, so can't leave the house to work up the shed.

Lastly I want to say a big thanks to all my followers and casual glances for breaking the 10 000 page view score. I was thrilled yesterday when it did so. I know for many people 10 000 is not a large number but for me I do feel it was a significant milestone. So once again THANK YOU.

Short and sweet for now more on Saturday. All the Best Clint 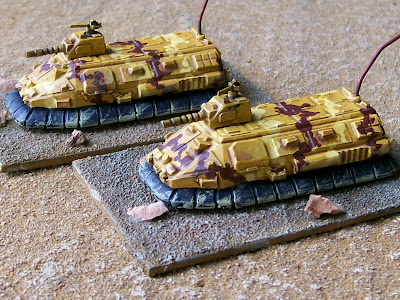 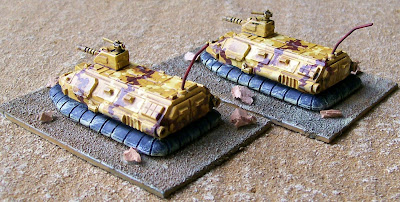 The standard infantry carrier for the Federal States Europa is the Aero-Glisseur Combat d'Infantrie 5B. A medium sized hover vehicle capable of carrying 8 infantry into many battle field situations. The 2 crew, driver and gunner stay with the vehicle when the infantry dismount. The Stargrunt universe has these vehicles build under licence by several factions so realistically (for a sci fi game) they could be the most commonly encountered troop vehicle. As you can see they both have a small turreted weapon as well as a pintle mount. The pintle mount could have gone on the back where I have fashioned an aerial, or the top of the turret.
As metal kits they went together easily with a little flash to trim but otherwise clear of mold lines.not a massive amount of pieces and fairly self explanatory with regard to assembly. I do like the face that the skirts are slightly raised which aids they eye in seeing them as hovering It was not something I really noticed until I put them on bases.

So my 15mm stargrunt force is slowly growing. Very slowly I grant you but it's all going in the right direction. Just a quick post today, more on Thursday. Until then take care and speak to you soon. Clint

Post script: Just picked up some off cuts of wood from my neighbour so I should be able to start making stuff in the next couple of days.... (Fingers crossed). 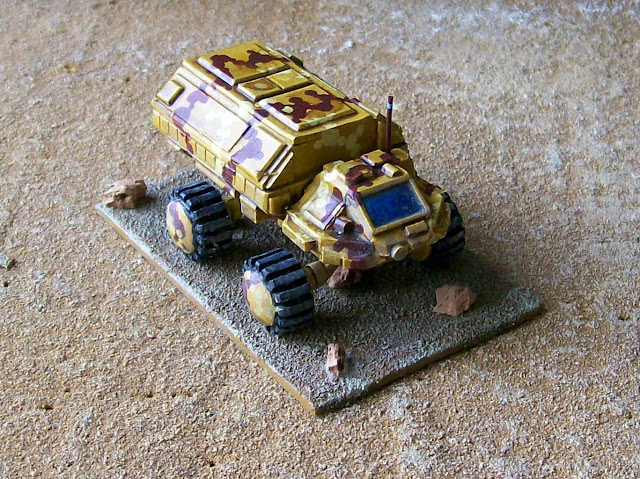 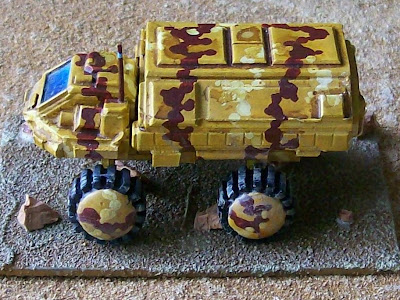 This 15mm Science Fiction truck is by Ground Zero Games (http://shop.groundzerogames.net/ ) . I purchased it at SELWG last year, and it ha been staring  at me across the painting table ever since. I admit it, I was feeling guilty and that I was neglecting it. Following last weekends game of Stargrunt 2 I felt inspired to tackle it. It came with no instructions and in several pieces which made it quite tricky at times having to make educated guesses where things went. Most of the castings were good and went together well some mold lines and flash, but nothing that would stop me getting more. (In fact I have sent for a few bits and pieces). I must admit that I do have a Stargrunt force in 25mm but in the four years I have owned it only part of it ever got on the table once. This might be why I have decided to get rid of it and move to 15mm instead. It also might have a lot to do with the fact that John Tuffney has sold the vehicle molds on to another firm and only a limited variety is now available. 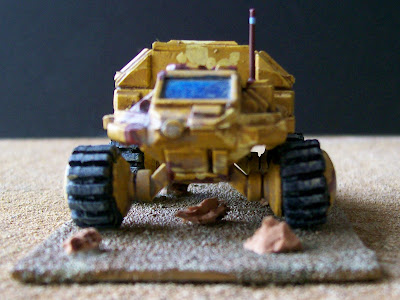 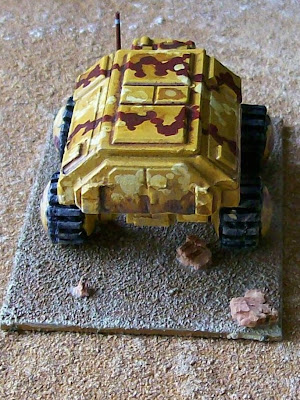 Given that I have talked about making a 15mm Apache Indian game it made sense to me to paint this vehicle in desert camouflage. Originally I shied away from it as I have seen quite a lot of Sci Fi games on desert, temperate or ice worlds and I thought it might be nice to do something different. Having taken a "Common sense pill" I put that idea behind me and determined that I could use desert terrain for both games. I fought against it but finally conceded!

While only a single vehicle at this time I shall grow the force probably to a reinforced platoon size. At least one other club member has 15mm Stargrunt so an opponent is not unfeasible. having said that I would like to create 2 opposing forces so that I can instill a unified painting and basing feel to the troops. It is possible that I am over thinking it, but generally games do look better is everything looks like it belongs together which is hard to do if several players all want to buy and paint their own. To me at this stage it is worth the expense to get the game to look how I would like it. By that I mean no disrespect to other club members. The base is simply mount board that I have spare and the "rocks" are small pieces of cork crumbled into random sizes and shapes.

That's today's post, I have lots to do this week in order to see the zombie game I have planned come to fruition in 7 days time. Most of it revolves around contacting my neighbour (the builder) to get some free resources which I can then "rough-cut-and-bash-fit" into the setting I desire.

More Again Tuesday. Thanks for reading and take care Clint.