Finished in time to tomorrows game. (Unless you know othewise!) 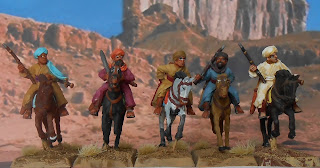 Well the title says it all. I have everything painted in time for tomorrows game.  Or have I?

Starting with 5 tribal cavalry.  Firstly I have not had any message back from Matt so I am not sure if he has seen these yet. So he may want things changed. He probably will not but no problem if he does. 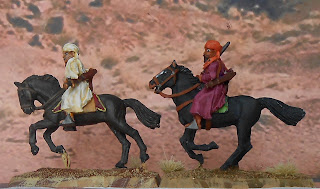 I have painted them in a random collection of colours so they should fit the tribal feel of the force, with some members having more money and being able to afford more colourful cloh and others less well of and having to buy the cheaper colours. I will admit that is all guess work on my part. So it could be very misleading indeed. 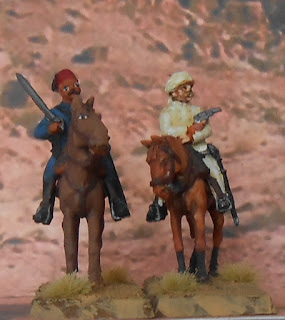 2 Officers for the Egyptian army. The one dressed in white is clearly European. While the one in the blue uniform is possibly Middle eastern and equally possibly Italian, Greek Spanish or even from Southern France or the Balkans.

Matt suggested the colours on these figures so I am confident they at least will e what he wants. Again not sure of the manufacture and more than happy for a more learned soul to inform me. 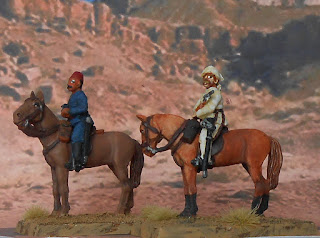 And while I cannot do a group shot I can at least show all the cavalry together. So the Last pic has all 7 of them in one shot. 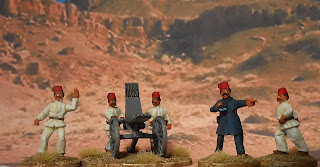 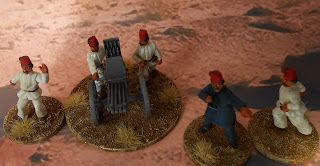 Lastly I know Matt looked long and hard (Well that is what he told me anyway)to find an Egyptian MG> these I do know are from Old Glory. !  Officer and 4 crew and painted in the heat wave in a matter of 2 days.  The result was my red paint and a brown paint dried up and needed to be thrown away. I suspect there will be a few more as well like the dark blue (I know that was on it's last legs). As a consequence I will need to replace them tis week. maybe on Monday depends on what I am painting next. If Matt reads this before Sunday it will e more of the same and I will have to order paint as fast as possible. I am only semi joking when I type this as I am sure he will already

Anyway despite the heat these really were fun to paint and being mostly in one colour were relatively easy.

That is it for today. But if possible have a productive painting weekend. 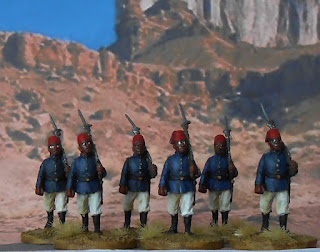 Firstly let e Say that Matt has already received these. Which means I will not be able to show a group shot at the end.

Just 6 more marching Colonial era Sudanese. They are of course Wargames Foundry and are colour matched to fit in with Matts other Sudanese troops.

With luck we will be having a game with them on the weekend.

Next post in 2 days time. I should have some more finished by then. 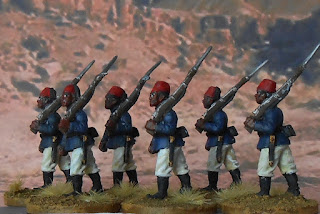 Here is a report on the game we had at the Broadside show.

We were playing "The Men who would be Kings" rules by Osprey. All the figures terrain and everything else is owned by Tim who was referee. (Yes that is an Airfix Fort Sahara before anyone says!)
Peter and Bob took the Imperials while me and Matt had the Mahdists.
Our job was to hold the town.

Conclusion: The Native players (both me and Matt) agree we could not hold the town. The imperial players also agree that while they could take the town they would not be able to hold it for very long at all.

While Questions would be asked in the House concerning British losses I would conclude it was a marginal Imperial Victory. Maybe in the future British foreign policy would change. But for now I accept the defeat and know in the future I would play the Mahdist differently in the same situation.

Overall though a good game and a good day. 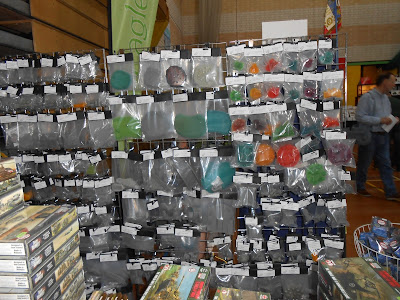 Here are a few of the less well known traders that were at the Broadside (Sittingbourne show). I mean absolutely no disrespect when I type this as I think they all have something to offer. And while they may not be new to you they are new to me. And for tat reason alone worth a shout!

Firstly WTW (Or Wargames Terrain Workshop.) Click for a ( LINK ). While they were not present in person Jim from Rochester Games and Models (Local seller link) had a large range well displayed. I have not spoken to the owners (Tori and Jim so I do not know but  )I imagine it all sold rather well.  I rather hope  so.

Another trader I would recommend. is BLOTZ. (Blotz link)I had previously not hear of them which clearly is my mistake. They seemed to be doing a good business on the day. MDF terrain of a quality and cheaper than elsewhere. I will most definitely be looking for them at future shows and maybe a sneaky mail order as well. Really nice guys and very helpful (at least to me). So well worth checking for mdf terrain. Seriously just click the link I doubt you will be disappointed).

Most of the other traders I knew... OK I did not know the airbrush supplies company, but then I do not have an airbrush so I would not.

Sorry it is a brief post today. Things to do and a shed to paint.....