Well Sailing Saturday is now on turn 3.  With the Turn order being British move, British Repair, Spanish shoot, British shoot, Spanish repair and then finally a Spanish move. Again as no one is in range this turn it makes little difference. Next turn though things might get a little different as depending on the phases that are drawn and the moves players make it is possible for a couple of ships to get the first shot. Milsey and Peter Douglas being the most likely dependant on the phase order they are drawn and arcs of fire but I suspect the following turn it is far more likely! So expect the first shots fired soon.

Well that's the positions this turn. As ever if you do not send me a turn you will carry on in a straight line and only fire "Ragged Broadsides" if you are in range and arc of fire. Not a problem at this stage but it may get that way in future turns. I mention this again as 5 people did not send in orders this turn.

There is a new player as well (back of the Spanish line) so welcome to the game and may the frigate serve you well.

As ever if you need more Photographs or have any questions get in touch. Either by direct email (if you want a private reply) or leave a comment on this blog for me to give a public answer.

I will need your next orders by August 23rd 6am GMT. Don't leave it to the last minute or I will not have the chance to answer questions. 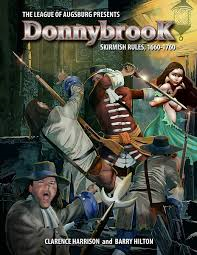 For those of you who have not come across the "Donnybrook" rules they are a skirmish set of rules base in the 1660-1760 period. On the "League of Augsburg" Forum these rules have been used for everything from  The second world war to Medieval. Yes they are that versatile. It has taken me a long while to settle on exactly what period I would do. Firstly I thought of Tangiers 1661-1668 (the British Possession). My next choice was Hernan Cortez and the Conquest of the Aztecs. But I did settle on Queen Anne's War eventually. Not because it is a period or war I am totally drawn towards but because I already had enough figures for the period. So I swapped them from the Wars of Spanish Succession to Queen Anne's War.

For those of you LIKE Myself who do not understand what Queen Anne's war was all about here is a LINK. For those not interested in following that link and reading the real history, it is the second of the French Indian Wars (the first being King Williams War). So Just think of the Queen Anne's War as being the War of Spanish Succession (WSS) but set in the new world of the Americas. AS such It was Britain with their Native American Allies against but the Spanish and the French and their Native American Allied tribes.

To make a balanced force the "Donnybrook" rules allow a certain amount of points, Usually 4 Points. And Depending on how skilled you want the troops to be the less troops you get for a single point the more proficient these troops will be. As such I have 2 points of British "Drilled" troops each with a character. There are a choice of characters depending on which faction you are building. Army, as this is, has different characters from "outlaws" "Tribal" "Civilian Mob""Cultish" or "Witch-hunters" for example. So for these points I have 8 drilled foot and a musician (drummer) in one group and 8 "drilled" foot and a sergeant as my second point. 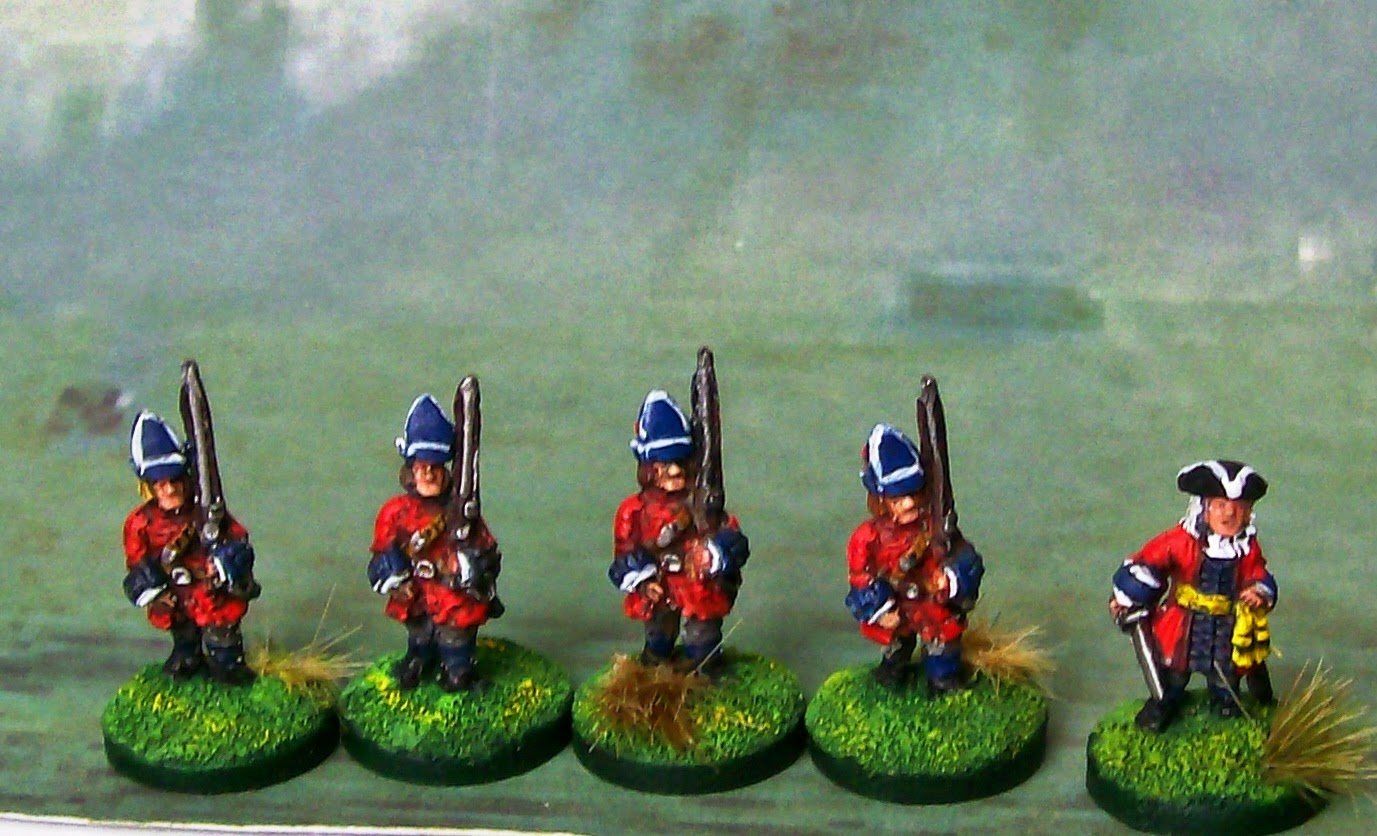 My third Point is an elite grenadier squad of only 4 figures with a commander as the character. I will make this squad bigger as reading the advice on the form 4 elite figures are not that effective. Therefore I will expand this to 8 figures in the next few weeks. I have not done it yet as I will need to split a few packs to increase the numbers. 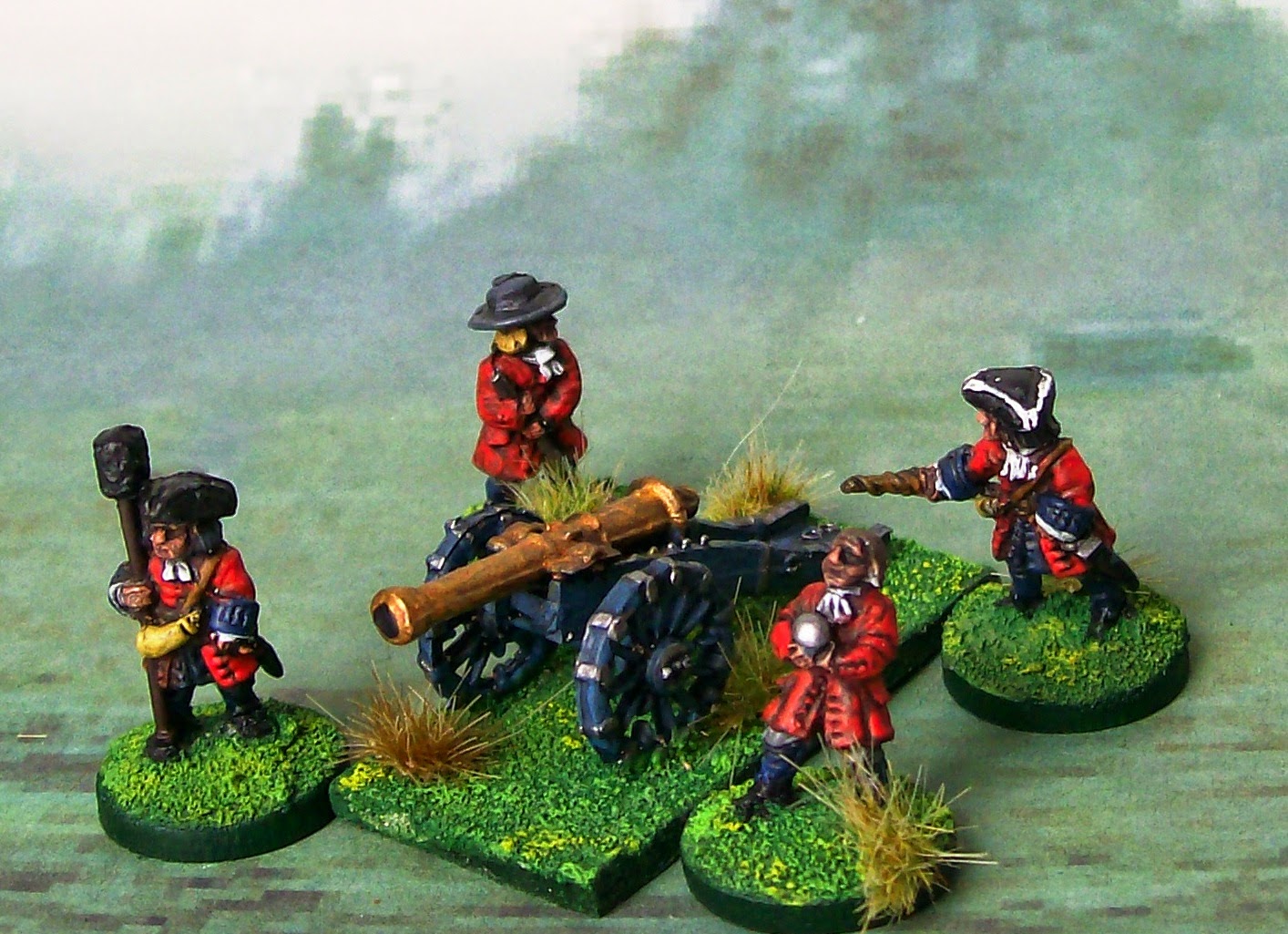 My last Point for now is a piece of artillery. There should be a character with these, but I simply forgot to include him in the photograph. Opps! Artillery are purely optional in the rules and once I expand the forces and have more options I will most likely not use it so much. But I have 3 artillery pieces (2 more to Paint) so I thought why not.

I have started 2 points of French as an opposition, so will try to crack on with them pretty soon.

All these figures are by BLACK HAT in 15mm scale. As such once we start playing I may use centimetres in stead of inches for movement and ranges. Time will tell for sure.

Thanks for looking today and I hope this change of scale and project does not throw anyone too much. Paint Monkey is also busy at the moment and you may expects some more 28mm figures on Sunday or Monday. That said I will post turn 3 results on Saturday for the Age of sail naval game. So If you have yet to send me a turn, time is running out!

That's it for today See you again on Saturday if I am lucky.

Email ThisBlogThis!Share to TwitterShare to FacebookShare to Pinterest
Labels: 15mm, War of the Spanish Succession

Vietnam Play-test rules at the Rejects.

It was a long day. We started playing at 10am and finished at 9pm. OK so the first hour was all admin and learning the rules but then at least 10 hours at the table. So Like I said it was a long day.

WE were of course playing in Posties Shed of war with Smiffy acting as referee and Postie and Surjit taking the role of the Viet Mihn while Big (Lucky) Lee and MY self were the forces of the "Free world". But Lee was in charge of our forces and Surgit was in charge of the enemy with Postie saying things like "I love you long time GI" as the second in command for the communist backed Viet Mihn.

All the movement was hidden set up and movement until the unit either fired or were spotted so we had a little game of hide and seek with machine guns to start with but finally they started to appear. As we were defending the village/town/base/who cares we were a reactive force and not the aggressive force. We were also told that we were low on ammunition so Commander Lee wisely did not want to waste any with wild long range shooting.


Conclusion: With the exception of the Viet Mihn Mortar crew we killed all the enemy sent against us. And if we had had gotten them we would have scored an extra 20 Victory points for wiping everything out! But we didn't so the final victory point score was 57 to Lee and myself and 44 to Surgit and Postie. Losses were very heavy on both sides. Un realistically heavy really, but it did make for a fun and exciting game where it swung from one side to the other. Yes there are things I would change in the rules, but I can say that with most commercially written set and not just a play test of a "homebrew" set. So overall I would say it was a very enjoyable game and the rules did work mostly.

So thank you Smiffy for putting the game on.

That's it for today expect some more soon. 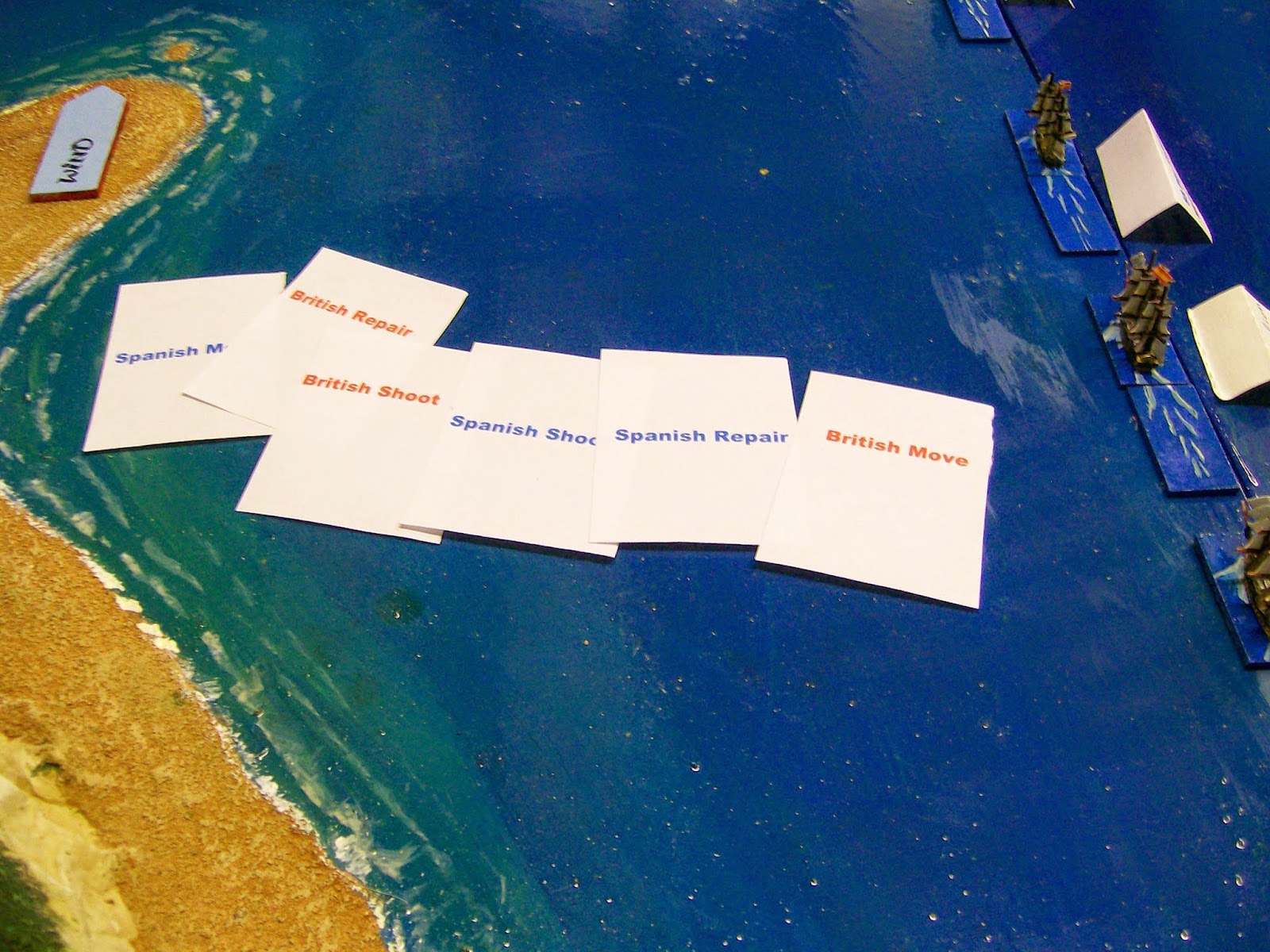 Well the second turn is now played out. and the turn sequence was drawn at random with Spanish ship moves in the first phase and British ship moves in the final phase. The first Photo shows the turn sequence in order and this sequence becomes more important as each turn progresses. For club games we turn the cards one at a time to maintain suspense and to allow players some anticipation and hope that they will be in the order they want.


There is another sail on the distant horizon out to see. AS yet it remains unidentified.

Don't forget you can either turn (if you choose) before or after you move. Just make it as clear as possible to me.

All the ships EXCEPT HMS Challenge are still at full sail,for next turn. Also kindly note that the Two frigates so far in the game can both move slightly faster then your ships of the line. But only slightly. (About 1cm a turn faster).

As ever if you need any more pictures I will be happy to either publish them on the blog if a comment is made on this Blog or Email them to you privately if you email me privately! So It is up to you how secretive you want to be. The same goes for any questions. All your previous turns emails are now deleted ready for the next batch.

As the next turn will be on Saturday 16th August. I will need your turns by Friday the 15th.

Thanks for the turn guys and I look forward to your next orders.