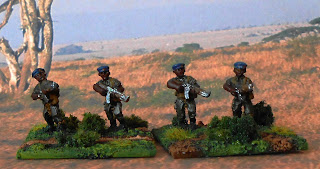 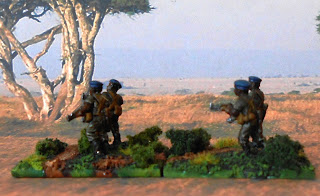 Firstly here are 4 15mm figures. They are from the Bodyguard pack by Peter Pig AK 47 Range. I just had 4 figures left over an they were doing nothing so I thought "Why not?" I did not have an answer so it was either get them painted and ready for wargaming or leave them to rot in the lead pile. I have painted these up as professionals so they shall join my AK force and while not big enough to be a unit in their own right they can always be lumped with the professional troops should the need arise.

Just 4 15mm figures painted and based and now ready for action. I did wonder about the colour of the berets finally settling on Blue (Generals Bodyguard have white) as blue and white are the national colours. LOL but they were very nearly yellow. 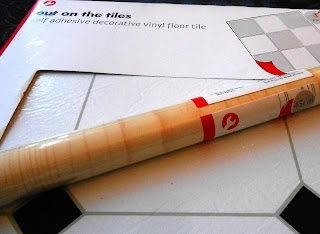 Inspired by some of your comments about Aeronef boarding actions I decided to make a cheap board. So I nipped in to Poundland and bought 2 packs of floor tiles maybe I should have bought 3 but this will tell me if the idea works. My thought is that if I coat them in the old blue peter "Sticky back plastic" (also bought from Poundland) the floor tiles will act as the base board for minimal expense! I Will let you know if this works. My initial thoughts is that it will, but I have no idea how 1) easy it will be (I am hoping for very) and 2 Light and portable it will be (Again hoping for very). As always you shall be the second (After myself) to know.

And Finally I succumbed!  I bought the Rule book Maximillian '34. I do intend a review after the club have seen it and I have finished reading it and I will be most interested in how it compares to Gaslands . So no review yet but initial thoughts are positive, with all rule sets you always think why have they done it that's way and what if. But so far so good. But be aware there is not a lot of BACKGROUND about the world setting in the book but that can be positive as much as negative.

I shall give more details when I have read it unless I hate it in which case it will hardly be mentioned again. 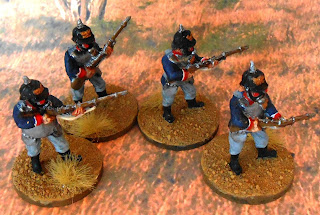 Well here are the latest figures. 4 Ironclad miniatures German Victorian Sailors with rifles.  They are destined I think to fight the British naval landing party. (shown previously). You may recall that I did think the pistol armed counterparts would be armed with maces as that is what I was told by Ironclad at a show. In an ideal world they would also have 2 heavy/support weapons just to exactly balance the British. 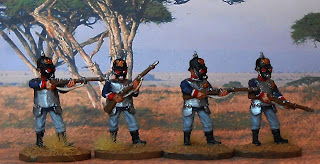 I do think these will be used for "In her Majesties Name!" as part of the Aeronef  Fliegende Truppen. Possibly for a show game but probably not as we would all like, I am sure, to see a battle in the skies between Victorian era British and Germans.  Obviously as it never happened I have made the uniforms up. (and why not!) Based on reality with a healthy chunk of escapism mixed it just for fun.

As mentioned they are Ironclad miniatures. I can see these fitting in well with both the British and Brigade Games Aeronef game. You never know maybe a skirmish action as two aeronef clash is a possibility. I wish I had not said that as I fear I shall get side tracked.

Well anyway a further 4 figures from the lead pile to the painted pile and maybe an idea for the future.

Have a good day. Probably a couple more tanks on Saturday (or maybe something else) Take care, have fun and paint if you can.

The Blog title seems to be appropriate. Over the weekend I went to a boot fair and purchased 3 Planet of the Apes DVDs No not the Charlton Heston version, but the newer ones. Ones which I have not at the time of writing seen. The princely sum was £1.50, having not seen them I have no idea if this is money well spent , but if they are as good as the originals (I doubt it) I shall not be disappointed. 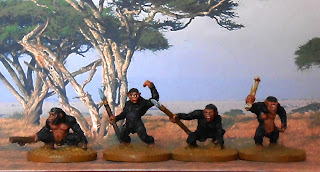 In addition I have been painting some Lucid Eye Simians! Just the 4 but I have both a Tarzan (and Jane) figures to go with them If I choose as well as some rather large apes. So If I choose I can have a "Pulp Alley" crew/gang/mob up and running in no time at all. They can of course be used in many other games, 7TV or Judge Dredd or well anything you want to think of.

They are 28mm but are quite small and despite the sixe of human comparison would struggle to fin into many other games, although one could see a giant ape in New York city if one really tried to think about it.

I must say a joy to paint and with no flash or mold lines or other casting defects. I could and would recommend them to anyone who waned some model apes as they are really easy to paint. 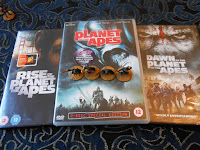 I am in 2 minds about what kind of base to give them so I settled on just desert. In addition as they carry weapons I was thinking they should also have a primitive marking maybe a red hand. At present I have decided against as this way they are slightly more versatile.

That's it for today thanks for popping by and I hope you liked  them but that is it for now.

All the best and enjoy the sun and weather if you can but no skin cancer. Next post in 2 days time. Until then, take care have fun and enjoy yourself. 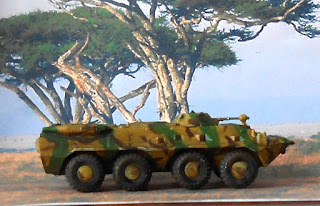 yes another vehicles  for AK-47 despite the face I have not played it for over 2 years! I was not a fan of the re-write and as such it as a game fell out of favour with me. yet despite this I am still building up an army. Sheer madness I tell you but what else is knew!

This is actually the Zvezda kit of the BTR 80 at 1/100th scale. yeah I know it if not true 15mm but it is close enough for me.  We can all get perdantic. This is my first and Only (so far )armoured personnel carrier for AK 47 But I hope to get one more. Like all the Zvezda kits they are easy to put together and assuming you have at least 1/4 of a brain you will get all the pieces in the right place. I am not saying they are idiot proof but pretty close! 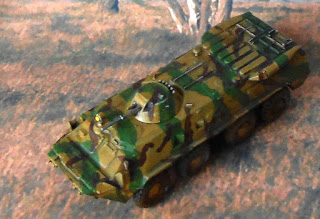 Overall a worthy addition to the AK force. And while only (in the rules) able to carry 4 stands at least that is 4 stands they will not have to walk to the battlefield! 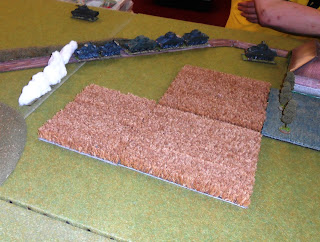 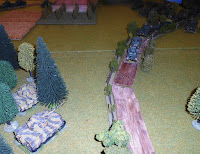 Yesterday I went to Rochester Games and Model shop Yes here is a horrible Face book link. (I say horrible as I do not like Facebook) Link and I am sure if you live in the Medway towns you are at least aware of them. While there MHWC (Sittingbourne wargames club) and they had a game of Rapid fire going on. this is turn 1 and 2 in the photos I had real life to get back to.  As usual with ww2 game far to many tanks. A realistic ratio is 1 tank to 600 soldiers.  But we all do it. 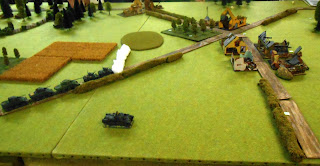 Things when I left were not going in anyones favour. Yes the allies had lost more vehicles than the Germans But the Allies were ambushed and they would be able to replace their vehicles which at this stage of the war the Germans would not. My advice to the allies would be pull back and call in air support and let the infantry move it to mop up. hell but no one asked me and I was not playing so it was all up to them. But at this stage of the war the Germans could not afford to loose tanks or Fuel so no matter how the game was played the Germans were bound to loose!

A very Jaundiced view I realise, but that was the truth at this stage in the war. Why through away lives, call in air support and sit back and make a brew!

Should have some figures painted by Tuesday so enough of Tank and Tank things for a while. All the best and enjoy the long weekend!