Waiting for Paint to Dry. 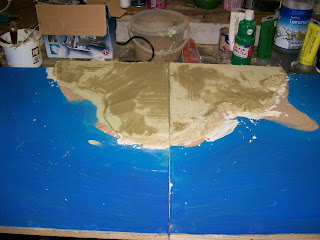 The different shades of tan on the land sections of the boards to the right show different levels of dryness of the boards. A wordy way of saying that the boards have not quite dried out yet.  At this stage I have carved out the cliffs and for the most part I am happy with the results except where It has crumbled and needs to be made again. 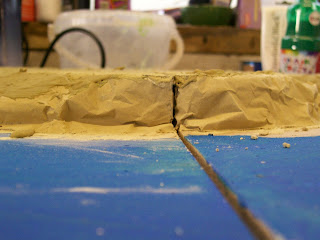 It's still a long way from being perfect, but hopefully the close up will show that they are meant to be cliffs and not just "dollops!"

Unfortunately the boards are not perfect fits, but I can and will work round that and get them closer than they are now. But for now I am concentrating on the land masses. The Paint should dry by this evening so I anticipate starting the next step (ground texture and beach texture) either late today or on Sunday, depending on the weather. I have worked out how I will do trees, but until I get scale pinned down I am still open on how I will make some buildings. You would hope that I would have scale pinned down long before I had gotten this stage. I have two choices either the more traditional 1200th scale or the less common 2400th scale. I am waiting for my 1200th scale ships to come back home and then see how many I have of them and in what condition. I also have some 2400th scale ships which are now primed and sitting on my paint table. 1200th scale would look better but until I get them back I will work on the smaller scale. Just incase he somehow "forgets" to give them back!!! And even if he does then I will have to re-paint and no doubt re-rig them so it might be easier to stick with the smaller scale and be done with it. The other advantage of the smaller scale is that the cliffs will look more substantial and therefor impressive. Time will tell. 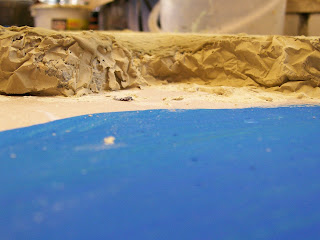 This picture shows where part of the cliff has crumbled. AT this stage I have dropped some filler (among professional modelmakers Filler of different kinds is known as "Plod"). So this cliff section has been plodded and once dry I will re asses the situation. I could either re surface the cliff in this area or go with the situation and adapt the cliff and cover the error with some form of foliage. This is my preferred option as the cliff is not a prescriptive cliff of an exact coastline. This gives me far greater lee way with how It can look when finished. So we'll call this a "happy accident" and no one other than blog readers will ever know the difference. 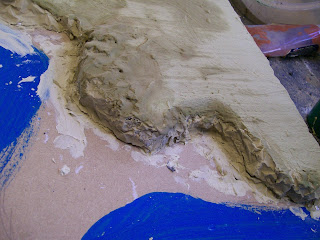 Another closer view of the area in question. As mentioned above it's not the desired result, but I hope to turn it into a feature rather than worry about it.

Barring accidents, mishaps and problems with British Rail I should be going to visit the Rejects tomorrow for a game. Needless to say I and no doubt Fran, Big Lee, Ray and I am told the Lead Legion (whom I am don't think I know yet) will all do our own AAR of the battle. To be honest I have very little idea what to expect but as all the guys are quite personable (for a given and set value of personable) I do anticipate quite a good day. I am told it will be a Napoleonic battle organised by Postie. Napoleonic's are really not me period of choice but I can roll bad dice for any set of rules or wargames period so I am not expecting it to go my way at all. However one does not travel to the Rejects home turf expecting to win, but more to witness the banter (erhm... I mean, the slagging of each other off). Let's hope I'm not disappointed!

That's it for today, feel free to wish me luck for tomorrow and the Rejects. Have a good weekend and look forward to the AAr on Sunday (assuming I have recovered from the ordeal!)
Posted by Clint at 00:19 10 comments: 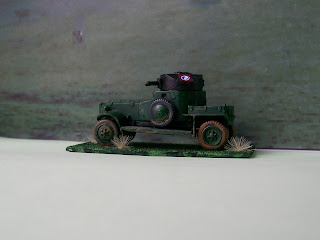 Despite the weather, and not being able to do any work on the seascape boards up the garage I have not been totally idle. Although I was not able to undercoat anything new I did manage to re-paint a very old 20mm vehicle. Given that it had not been touched for about 20 years it was not in too bad a shape. Nothing needed repairing, just repainting and basing so all in all was a very swift job.  As you can see it is in British Union of Fascist (BUF) colours standard army green with a black accent colour, in this case turret. Thunderbolt flashes are also added to the turret just to make sure there is no mistaking.

The weather has brightened up today so I hope to be able to get some more terrain building done this afternoon. Or more realistically see what has gone wrong since last time. If I am lucky and nothing has gone wrong I can start on the beaches and land masses. But until I go and check who knows!!

That's it for today. Very quick I know, thanks for reading and I'll try to have something more substantial on Friday. All the best Clint
Posted by Clint at 03:43 10 comments: 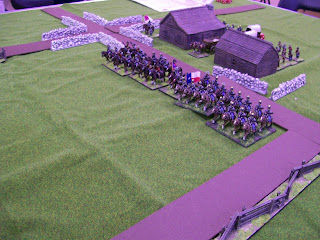 Foe several reasons I was only at the club for a very short time yesterday. Feeling poorly but making a swift recovery, Mothers Day and needing to cook a meal for a large family gathering, and the rugby was on all conspired to me being mostly absent for the day. Which in many ways was a shame but you can't always do everything so perhaps you just have to do your best. Anyway here are a couple of very quick snaps of a game Tim and Graham were playing. As you can see it's ACW and in 20mm. The game started as a cavalry encounter but as I was leaving infantry had started to arrive.

Luckily before I went to the club yesterday morning I did a little work up the shed on the seascape boards. I say luckily as it is snowing today and I don't fancy working in a building with NO heating. Which means there may be little to show particularly if it does not come out how I want it to.

The other problem with it snowing is that I cannot use any spray primers to undercoat anything to paint later in the week. So until the snow stops I am in limbo wargames wise. Oh dear what a shame. but I suspect things will come to pass.