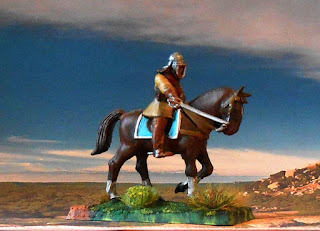 yep 1 more English civil war cavalry man. I must admit to buying 4 so you may expect to see all 4 together sometime. (indeed all 4 are now started with the foot to follow in due course).

While I was only looking originally for 1 it is a shame to have 4 and not paint them so 4 it will be. 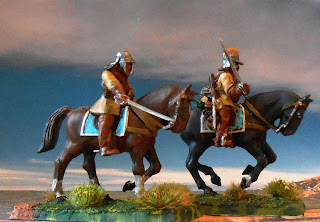 The second pic shows them both together and a handsome pair they seem to make. Now this is only the 2nd ECW figure I have ever painted so any mistakes you notice should be minimal but I am sure there are a few as I am not yet too complacent. Although I am sure that will come in time.

28mm Warlord games a joy to paint and to put together and I must say I am rather pleased with them both. (So please don't rain on my day by pointing mistakes out!). The other 2 are already started but I am not expecting them very soon to be finished (Just stuck together last night).

I do have the feeling that I might buy a sprue of infantry (possibly Scots although painting my Tartan will be hard.) But for now just 1 more ECW horse finished. I really don't are if they are cavaliers or roundheads so feel free to choose and when I use them they will be just what I need.

Have a good weekend. All the best Clint (Cold and Chilly atm) 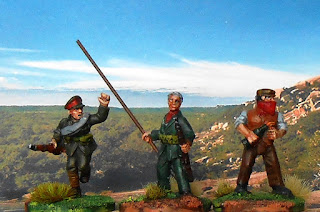 Yes I have finished another batch ready for matt on Sunday. The figures are Empress miniatures Spanish Civil War figures. However they will be used as Very British Civil war figures.  At the end is a group shot of the whole batch.

Again Mat wanted a socialist look so plenty of Red on handkerchiefs ad balaclavas, neck ties and caps.
The figure holding a pole will later be a flag bearer but that is a job for Matt and not me. 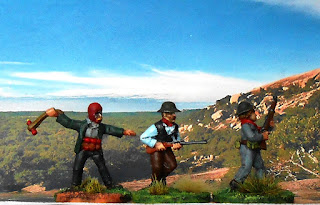 Some (a few ) of the figures are women and a few have head swaps or at least hat swaps. Which means there are more British helmets.
Not a problem to me or as it happens Matt.

matt is aware that there is a figure missing. It has gone absent without leave and will have to have another blog post linked back to this one.

That's it for today. I shall try to get an ECW figure done for the week -end. But no promises just if I get time. It is now started and should (fingers crossed) be finished soon.

Thanks for looking. More again soon. All the best Clint
Posted by Clint at 06:33 18 comments: 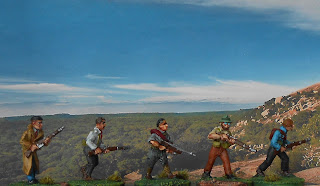 Slow off the blocks today. Took me a long time to get going. Sometimes we all have days like that. Anyway here are 13 28mm Empress Miniatures Spanish Civil War figures. They have been painted to be Very British Civil War (VBCW) figures for matt. The last pic does show them all together as I know by now that people do like a group shot. 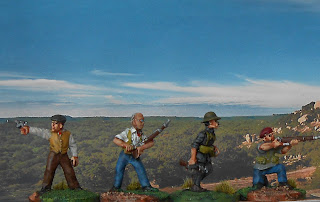 broken down into one lot of 5 figures top and 2 lots of 4 figures each. Theer are more on the painting table and I plan to have them finished on Saturday (sunday at the latest)

Weapons are a mixture bur mostly rifles as well as 2 SMGs and a pistol and one I just do not know what! (Middle figure top pic)/ I bet some of you have taken a look just to tell me. Great if you have and even better if you have not. 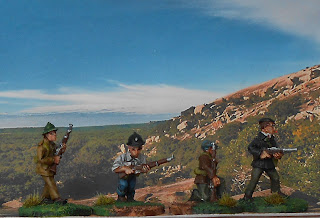 All the clothes are civilian clothes and in a variety of colours. Well the helmets are old military but what did you expect. We could go into detail about what a Spanish Civil War figure should be wearing but the truth is that for a Very British Civil War all the rules are out of the window as it is a fictional war so seriously anything could have happened. It is all down to you.

The last Picture shows them all together and what a mixed lot they look too. As I know matt wants to use these as socialists I have put red ties on them where appropriate but I have tried not to over do the colour as then it looks artificial. Which honestly it is but as Walter Gropius once said "Less is More!" (which did start a verbal debate among architects to which my favourite reply was "Less is less", but you really have to read all the replies to get the full meaning of that comment some 80 years later.)

Guess who had to write an essay on it! yeah you guessed.

Not sure there will be another blog post in 2 days time. Nothing even nearly finished. But Japanese Tanks started (and abandoned until I get the correct colour paint.... I can't mix enough) as well as another lot of these and even another ECW figure. So no ideas what will come next. It really could be anything.

All the best Clint.

Paint if you an and the mood and the weather takes you. 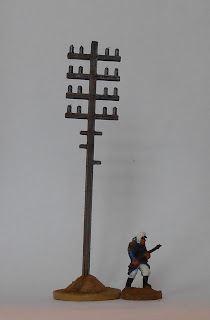 let me take you back to November when I bought these. (23rd November 2017) . As you can see they are now painted and based.  A figure 20mm is included to show scale and the fact that if put about 1 foot-2 foot apart these will look most suitable for BoB wargaming.

They can also be used for anything up to modern in wargaming in the set scale. So Along with BoB they can be WW2 or WW1 20mm as well as modern. While I have not seen any pictures of them in Afghanistan that will not stop me using them as they instantly give height to the battlefield. (which most wargames are lacking if you were to ask me... thank goodness you did not!

As mentioned at the time they are 3D printed and they are a little rough. None of which bothers me in the slightest. Personally I think they are great and just what the BoB battle field needs. 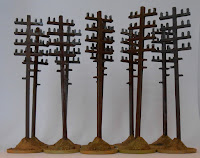 Obvious scenarios include, stopping a message getting through, perhaps calling up reserves perhaps furthinging the campaign story. Maybe calling for a plane to rescue an important person or artefact. Maybe to chop down and use to stop a train, maybe to show a no fly zone (due to the wires) anyway you get the idea and I am sure there will be supplementary scenario ideas.

all 10 (more than I need) are now finished and will enhance the battlefield in due time. 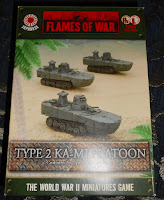 Lastly some more strange Japanese WW2 tanks for my PBI forces.  I expect them to provide more of a laugh than a threat in games as let's be honest not the most potent of ww2 tanks. But they did exist and they were amphibious and were cheap on eBay. And they is good enough for me. I hope to get them painted this week. More about them then.

Have a good weekend and paint if the mood takes you.