Not Going to Salute LOOT 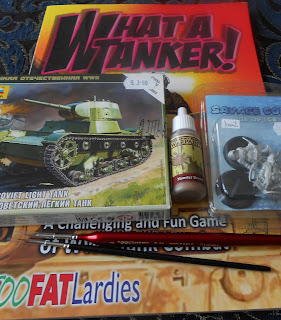 As most will know I did not attend Salute this year! I do not regret it. I am sure it was great and many interesting things were there. But it just costs too much to go every year. So here is what I spent the money on instead.... and it s still cheaper than the entrance and travel costs.
Total spend less than £44 so for me a cheaper option. Whine over!

lets start with the brushes. these are just to replace ones that have been worn out! they really were the reason I went shopping! The paint is brown paint as I always use it in a variety of shades, almost every day! The Lucid eye Figures well as they should be £7:50 and I got them for £4:50 I won't say too much more.

In What a tanker a T-26 is the starting tank for the Russians. Therefore I imagine it will see early are action either by me or by a friend. I will be going for the Russian Northern front in WW2 as this seems to give the greatest variety. Russians with some lend lease from Britain and America as well as Germans (with Finish allies, Italian Allies, Hungarian Allies and Romanian allies (yes there was also the Spanish Blue legion as well but they were without tanks). So More variety of tanks than any other front. yes the Germans did use some captured French equipment as well) but no Japanese tanks were used in Russia in ww2 (China yes, Russia nope! Unless of course you know better)

So that is todays up date more on Sunday when I get some painting done!
Posted by Clint at 06:39 18 comments:

Sunday at the club I put on another game of Back of beyond. (AKA BoB). The forces were Tim playing white Russians with graham as an ally who was also white Russians but secretly working for the Red Russians. Matt playing ti Indian British troops) supported by Peter Playing Askaris troops all the way from Africa... (Just don't ask it's complicated, just go with it.) All the troops are IT Miniatures and all the vehicles ae a mixed bag from all over the place.

Tim had been told that he had to rescue a cousin of the Tsar (Teresa was her name). Graham was to twart him but still assist and report back if need be about Tims Activities. Matt was to send a telegram and put an end to the Russian (white Russian) troops on Indian soil. Peter was to aid him as best he was able and to perhaps show the African troops as being superior fighters.

﻿﻿At this stage no one knew anyone elses objectives, nor should they, Telepathy does not exist as far as the players know....unless of course you know better.

below is a very brif aar. lots more happened and

In the campaign matt is now on 2 points as is Tim, Graham is on 1 1/2 points and Peter is on 3/4 points. I know I have never mentioned a campaign in this before. It exists ONLY in my head. That way I can stop it when I want.

Overall. the rules work pretty good and I do like the setting so this will continue for a while longer. Tim may or may not buy the rules and Matt already has a copy. So the only thing stopping us is enthusiasm. Which at present is above average.

Each faction does have a secretet mission and knowledge of these has not as yet been revealed. But I promise they are all logical and with that I will say no more.

Email ThisBlogThis!Share to TwitterShare to FacebookShare to Pinterest
Labels: 20mm, AAR, Back of Beyond (BoB), Club, IT Miniatures

Back on the Bounce! (Well here's hoping!) 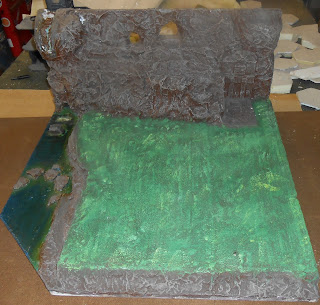 Yeah I admit it, it has taken me a while. Now however I feel that I am back on the wargames Bounce. So what does this mean? Well hold your horses and I will tell you. It has been a couple of years since I worked on this and in many ways I am STARTING AGAIN! 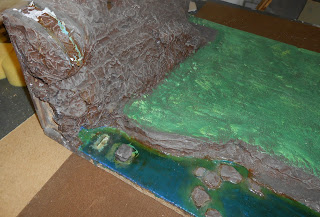 I stopped working on this for 3 reasons. One,A bird (don't ask me what kind  I can just say it was little and brown!) started nesting in my garage and I chose not to disturb it. But it has gone now! Two, I had grown dissatisfied with the idea. Now I am at the stage where I am willing to work on it again. I will have a bit of a re work and bring it back from this sorry state to (HOPEFULLY) a better one! And Three a combination of decent weather allowing me to work in the garage without freezing my ********'s off, lighter evenings and a set of rules I like.

So what do I intend to change. Nope not everything! BUT CLOSE.

Firstly I want to rework the waterfall, as well as add another "Cave entrance" at the base of the fall which will be big enough to allow figures egress. 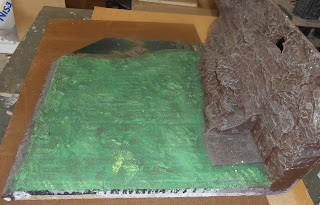 Secondly I want to remove the so called (by me) "Temple section . (3rd Pic down bottom right hand side.) This should give 4 cave entrances on that side, which I hope should be PlENTY of options. Under the water fall, 2 high up and one other. Behind the back board I want them to connect. Maybe not all, but just maybe some I will need to wait and see how it comes about.

Thirdly it Needs to be bigger. By that I actually me a 3'x 3' area and not 2' square as it currently is. So maybe the bank across the rivulet and a further 6" of cliff on the right as you look at the first picture. Also a further 1 foot coming straight towards you in the first picture. I also want it taller! It seems to me too regular across the back and that seems wrong. So by increasing the height (at least in some areas) it would look more natural. I would intend the close edge in the first pic to also be rocky as it sits it is far too regular. Maybe (speaking without thinking) there will be an overhang.... who knows!

Ok I know at least one person would ask if I did not say what rules! I am actually looking seriously at "Pulp Alley". I have the PDF and like the way the rules work and CAN see it functioning as a small participation game at shows. I know a mad idea and I need my head testing! BUT if it works what a setting it would make and  would be more than suitable for many adventures everything from Cavemen to Sci fi and everything in between! (Last of the Mohicans for example)

I will not go into figures at this stage, but I have it planned and some bought and am willing to buy some more although the rules do not require a horde of figures 7 a side is more than enough.

Thanks for reading my gibberish and plans for this board. I have an AAR for next time. And then back to painting as I work on this in peace and quiet!

Until then, take care, have fun and paint like a crazy perso!