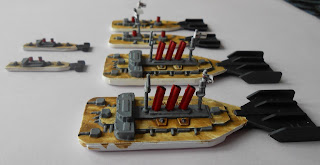 Just some Tidying up to do and the bases and then Finished.
I usually do not do WIP shots but we all make exceptions, and this clearly is mine (or one of mine).

I bought the German starter fleet and here are most of the models. (2 small ones are not included as I simply forgot them them undercoating) 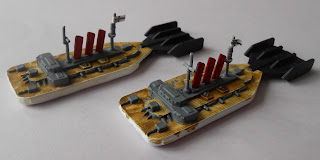 2 "Blucher" class dread noughts. These need the most tidying up as you can see the decking colour has slipped/run onto the hull. Being readnoughts I am hoiping they will be able to take and dish out a fair amount of punishment.

The flags were tricky so I might strip one of as well and do it again. (Blast you clumsy fingers). 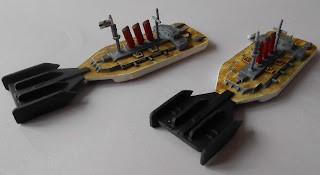 Colour wise I decided early on that I was NOT going all grey. That just seemed a very limiting choice so I went for white (Ivory) hulls and black (Charcoal) tails but I did decide to paint any superstructure grey. As there is also red on the flag of this period it made sense to paint the funnels red. 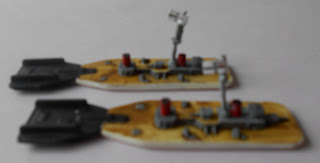 Two "Koln" Class armoured cruisers. While they are called "Armoured" Crusiers I fully expect the armour to be paper thin and prone to rust! But should they turn out to be tough I will happily eat my words. 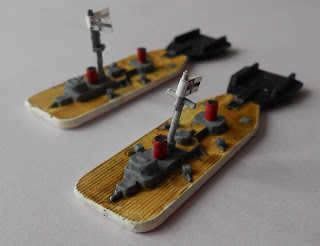 The colour scheme selected by the way has much ro do with the flag and more to do with the German sport strip. I did look at many other choices but the black and white just seemed to go so well, I stopped looking once I thought of the sports strip. Before any say YES I will paint the Dutch ORANGE to go with this theme.

Should I paint Matts British I will ask him what colour he wants though they will after all be his fleet. But if he wants "Paisley" he will need to pay me a LOT! (You are warned Matt).

Lastly (for now) we have two  SA15 Class Patrol Nef. as you can see from the final pic these are a LOT smaller. I have also left out the flags and the masts. Sorry I found them too fiddly on this size ship. Yes they should have masts, But as they are not for steering or to carry sails and thus provide motion AND as there was not any pre made wholes for them O simply left them out.

That in itself does not make me a BAD person so don't complain! 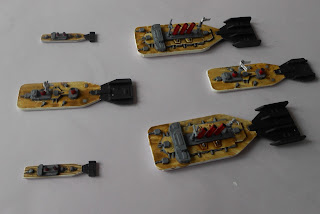 Yes two more little ships to add. But the last pic shows the relative sizes of the ships when together. I will add 2 more ships to the fleet shortly but I forgot to undercoat them at the time. My mistake no excuses. Bit of a tidy up and the bases then I am done and can start the Royal Dutch fleet.

Thanks for looking. All the best Clint 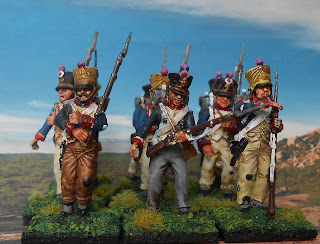 I have not had such a good week so far. But I am Ok and the Family are OK so it could have been FAR worse.

OKAY let us start with the Wargaming. As you Know I did play a Napoleonic game on the weekend. And as you will no doubt remember I aid I would help out painting up some 28mm French (as I had a box of Victrix models sitting about doing nothing. So here are the next 6, Making 9 in total. I am sure you can spot the difference. (I can easily) 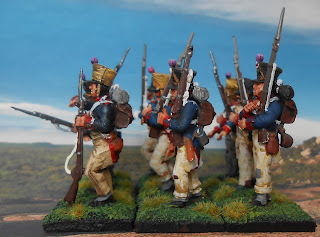 Having played the game I do not feel the need to make any flag bearers officers or musicians. Maybe just some NCO chevrons on one in the next 3. Or maybe some flowers on the base. Just an indication that One figure is in charge.

You may note that the Blue is darker on the last 6 following your feedback last time. I have mixed them in so they start to blend.  3 |More figures to go and then that is a Unit done. And As I am not enjoying it I will then stop and call it quits for as long as I can. I really do not enjoy painting them. 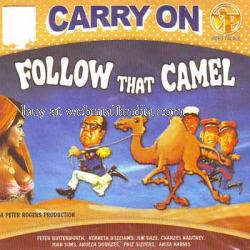 Following the Game on Sunday I got to thinking.... always a dangerous thing! I do now have a set of Skirmish rules I do like. "Songs of Drums and Shako's". I also have a desert town in 20mm (My Afghan town) which does not see enough play. I think with a very very quick re-write and a very slight reimagining I can use these rules to play some "Beau Geste" or in the clubs way more likely to be "Carry on Follow that Camel!". I already have enough 20mm Arabs AND a(this was a secret but I am blabbing now) some 20mm French Foreign Legion. (FFL) and while the FFL are few in number being just samples and conversions I think I can have a show quality game (but played at the club) up and running within 2-3 weeks. 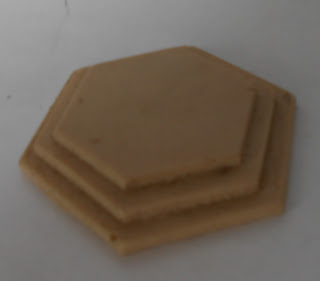 Finally I am painting my Aeronef fleet (no nothing to show yet. ) The problem being I really do not like the stands at all. The plastic breaks in the holes FAR too easily and the stands wobble a LOT with bigger vessels. Therefore I need either to make my own stands OR find a viable alternative. At present I am looking at Resin block stands as they will have the weight I require with metal (wire) columns to support the vessels. If you have a better Idea I am all ears. The Stand shown was made by Tim of Frontline and does not come with the Wire, but that really is a small thing so at present I am not worried.

Thanks for looking today and with luck more again in a couple of days.

Yesterday at the club we had a game of "Chosen Men" the Osprey rules. Tim provided everything, troops terrain rules etc. So All I had to do was turn up and play. Firstly let me say I do not like Napoleonic's so I am always going to be a bit sceptical so take most of what follows with a pinch of salt. 4 played (Matt and Bob (as the French) Grahame and Myself (as the Prussians and not as Matt insisted on calling us "the Vile Huns!")

It was all 28mm size and did look nice, But I am sorry not my thing at all period wise.


Conclusion: Whether it was a plan well executed or lucky dice roll need not be worried about here. The result was Clear. The Prussians were able to fight of the continued French attacks and as a result we won. Yes another win for me! I know I know this winning is becoming a bad habit.

Thoughts on the rules. Yes they worked, were they what I would call a skirmish game NO> We had 12 men to a unit and 7 units on each side. Some may say this is a skirmish but not for me. I have seem FAR to many people playing Napoleonic's were 12 figures represents a whole regiment, and not a squad or section. Tim put far too many officers in the game. In the end Melee there were at one point MORE officers fighting than men. To me the balance seemed wrong. But as it was his first game getting the balance right was always going to be tricky.

A fun day and I will try the rules again, but the whole period is not one I enjoy. So perhaps I am bias. Sometimes you come home from the club full of enthusiasm unfortunately I cannot claim this was the case this time. I am not complaining you simply cannot like every game. That would prove impossible for me.

But a fun day and nice guys and a chance to roll some dice. Maybe next time though I may sit the game out if at the club, obviously not at a a show (which I know will be next!)
Posted by Clint at 01:00 20 comments: