Yes only 4 more Burpa cavalry. But at the end a group shot of this BATCH, which is all the Burpas I have painted since xmas.

As with the rest they are all either Foundry or Empress Miniatures and all 28mm and with luck they should all work together.

The one on the far right is some kind of leader and the background makes him appear darker than he really is. The 2 in the middle shall carry flags or banner. However Matt knows I do not enjoy doing these so he will kindly do them for me. The one on the left is not special in any way  in that he is rank and file and not leader or standard bearer.

Lastly a group pic of all the ones done SINCE Christmas.

Thanks for looking and more again soon. Just give me a few days. Perhaps Tuesday. 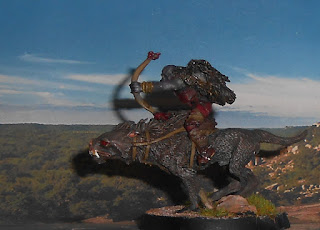 Yes another LotR figure rolls (or should that be gallops) of my painting table. To be honest I do not have VERY many more to do.

The figure is a Games Workshop Warg rider. . It is a 28mm figure, and was an eBay purchase. Following "Fantorical" blogs posts about Songs of blade and heroes Lord of the rings posts. So feel free to blame or praise him for the inspiration   (Link to BLOG). I do have a couple more to do so you have not seen the last of the Lord of the Rings figures just yet. 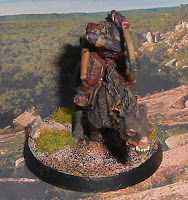 The shadows are present on the pics due to the dullness of the weather so kindly forgive that unless you are powerful enough to change the local weather here, in which case I would ask you to do that instead.

Consider this a short interlude as I carry on with more Burpas. Which I hope to show next time.

So until next time, take care have fun and paint like crazy. 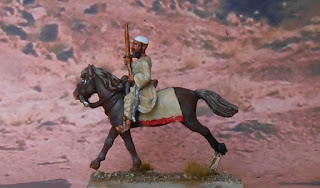 Yep just 1 figure today. The weather here has been dull and overcast. so much that it has been a "Challenging "time to paint. As such just a single figure finished.

It is of course a Burpa Musician for Matt. As such it is a 28mm figure painted and based to fit in with the rest of his troops. I strongly suggest he carries a trumpet/horn of some variety. I am not up on the technical terms so I will leave it at that. 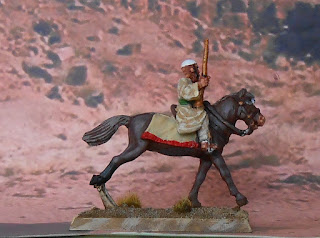 If the weather had been favourable it would have been nicer to paint. I am not complaining but let us just say it has been a struggle to paint at all recently.

There are 4 more mounted troops on the paint table and I hope to finish them by Sunday. But It may well take longer.

I suspect a LotR figure will be the next thing finished, but that does depend on how things progress.

Elsewhere in the Projects:

Kevin from the club gave me these. 2 "Golden Compass" airships.
The idea being that they could with a repaint and on suitable stands be used for "Crimson Skies" Time will tell.
But none the less a big thank you to Kev. Really appreciate it.

|Additionally a quick chat (is that a chattette?) with Tim reveals that his WW1 10 mm armies are very nearly finished. The Turkish is finished and the Imperial will not take long. This being the case I have put my WW1 project on the back burner. I will see how his turns out and then decide how, if at all to progress. Maybe I will turn into Arab Revolt... who knows.

That's it for today. I really do need to get my DIY head on and patch the wall left in the kitchen by the gas fitter.... GRRRR!

One of the things I like in games is not knowing what the other player is supposed to do. In other words hidden objectives. In reality no battle is won if both players know ALL the facts. It is enough to know what your objective is and IF you can deduce the opponents objective things SHOULD go easier. But there should be an air of Mystery at least at the start. So when I set up the "Back of Beyond " game I was expecting 4 players .But only had 2! Rather than being a hindrance I tried to look on it as an advantage. Thus Graham played the Russians (they could be white or red Russians depending on what he wanted, ) While Matt played the Indians.

From grahams point of view: The Indians had invaded his area and needed to be sent back across the border with their tails between their legs, the Dogs!

From Matt's point of View: the Esteemed Archaeologist had found something vital to the crown while travelling in the BoB and needed to bring it back to British control.

﻿
The Rules were "Triumph and Tragedy" set some where north of India in the late 1920's. Matt had the only hero "Henry Simons-Parker" an archaeologist who will no doubt turn up in further adventures . As in the rules Heroes do not die unless the GM (me decrees it so! I did not decree it so! (That's not a spoiler as he could still be captured or wounded or anything else I could think of if he did actually die in the game.

Each side started with 2 units on the table. Two of Grahams choice but Matt only had 1 choice, the other being the rabble of diggers that seem to accompany archaeologists everywhere. The diggers were the worst troops in the entire game. with the hero being (by far) the best.

The first few turns saw matt leave the dig site and head to the large compound where he had some Punjabi troops waiting in cover. Graham was fortunate enough to bring on a HMG from reserves and move up into better positions with the rest of his troops. 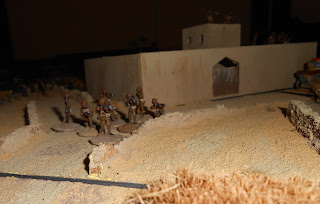 Despite telling ALL players that vehicles had paper thin armour and could be destroyed by normal small arms fire Matt bought on a Rolls Royce armoured car and as it drove up the road spraying bullets from its HMG. Graham in a lucky shot was able to destroy the HMG and kill the gunner with his very first shot! Thangs were not going Matts way.  The armoured car was targeted several more times and eventually lost a tire and the vehicle commander so by the end of the game it was just a bullet magnet and mobile baracade or at least that is how Matt used it. But in reality without a commander or a gun and with only 3 properly functioning wheels what other choices did he have.

matt did bring on another Punjabi squad. these on paper were better troops than Graham had. but Graham had the dice gods on hid side and the noose tightened around he Archaeologist . having set his troops to advantageous positions in the first few turn from then on the HMG and 2 squads were able to bring a consistent and withering fire on Matts figures. Both sides learnt the use of cover in the rules very quickly and while both did play well. The loss of the armoured car was a telling blow to Matt.

Matt separated Henry Simons-Parker from the unit and kept the unit closer to Graham thus providing a meat shield of protection. As Graham had to target the unit as opposed to the individual. 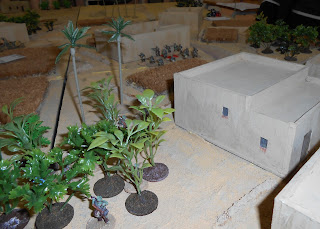 None the less there was only one avenue of escape left to Matt (if escape was the plan.). Matts Punjabi troops left the compound and took to the road. using as much cover as they could. Which was actually mud brick walling, and wheat fields (hard and soft cover) 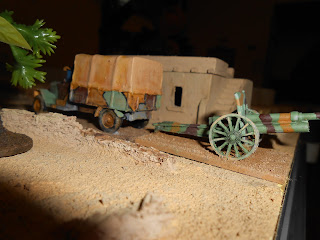 Graham was having the best of the shooting but not by much. Grahams troops tended to want to shoot at the Rolls Royce even when Graham would rather they shot at more fleshy targets. However Mastt was able to get a little relief and forced one of Grahams units to run out of sight and "Recover". Matts Tactic with his slightly superior troops were to take the recovery option in view of the enemy and risk routing from the table. Luckily  for matt he was always able to make the morale test and his officers were able to steady the troops nerves.

Towards the end of the Game Graham bought on the artillery . This was a Secret mission for him . It was considered by high command to valuable to loose  or even fire and it was just included in the game to scare Matt. It had no other in game purpose. But Matt never knew this. The idea being if more players only the controlling player would know it was not able to fire and a minor argument among allies might result when it was not used to "save" the Day, the game or his troops! In reality its only purpose was to give the Indians another target. Graham being sensible never allowed it to be targeted, and as all of his side (just him in this instance) knew it was just a distraction a lot of the sub plot was missed.

Conclusion: \Matt was able to escape with most of the diggers and Henery Simons-Parker. Some of the diggers no doubt would die of their woulds and other end up in erhm.. "detention". Having been casualties. Most were un harmed. Like wise many of the Punjabi's did not make it back across the border either captured or dead in battle.

The rules worked quite well and I anticipate another game. I will of course need a further read of them and a minor study of them. Overall I was very happy with the game and how the rules worked.

Graham lost less troops and was awarded a minor victory. A major victory if Simons-Parker was stopped but as he made it across the border and later went on to publish his results in the Royal Institute papers. being of a military mind you paid the results of the dig little heed but you did glean something about the Ice age animals not dying out as far in the past as previously though... All a load of pseudo-scientific hog wash of course, now where is that waiter with the brandy?