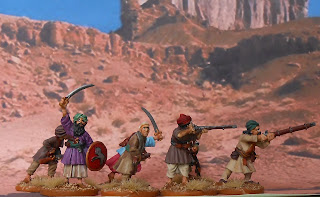 Yep later than expected the latest batch of Burpas are now all based varnished and put away. I was expecting to finish them last night but a day later here they are. & figures finished since the last update, they are a mix of makes, Perry, Foundry and Empress miniatures. 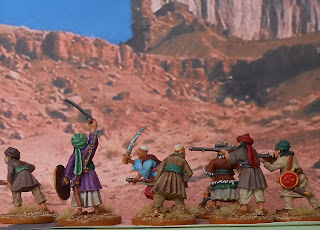 Obviously another leader in the purple with a silver horse on his shield, the others are somewhat duller in colours with cream and brown dominating. There are other colours as well, mostly as turbans or belt sashes or shields just to break up the earthy tones. One rather flamboyant chap is in baby blue and pink (or as I like to call it faded red!)

They all fit in with the horde as the bottom picture shows as the whole batch stands together.

Quite a fearsome bunch!

Thanks for looking and maybe something on Sunday and maybe nothing til Tuesday I just cannot tell yet as nothing is even started. 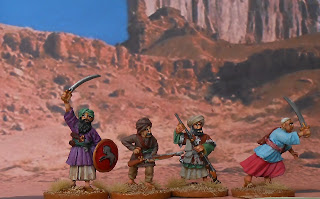 So with luck see you soon, all the best Clint.

yes one is on a horse. last night I finished 7 more Burpas, all 28mm from a mix of makes including Emperess, Foundry and Perry Miniatures. It gived them a nice mix and helps them look more like a rabble. Which I think is the look that Matt is going for. And to promote that look they are also from different ranges, some are North African and others Indian Hill tribesmen.

I have 7 more to paint in this batch so expect another 7 figures painted soon. Well soonish, I have the para Olympics which needs some serious watching as I do admire the atheletes who overcome adversity to achieve! 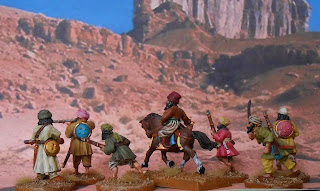 AS you can see these do look quite diverse and yet still look realistic and to my uneducated eye just about right for a colonial period game.

Below are some close ups and it surprises me how well they seem to fit with the terrain. Considering the backdrop is actually America printed out on the computer.

That's it for now, thanks for looking and I hope you day goes well. 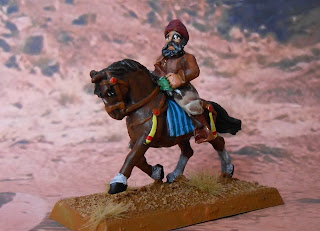 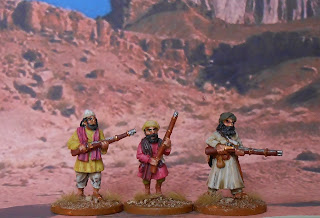 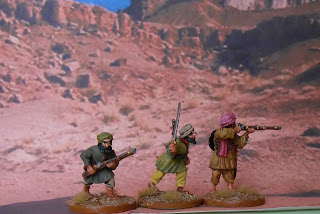 Yesterday at the club!

Firstly let me say it has been a good weekend. Firstly  I was given 2 cases of beer (And that is always a good thing). Not that I am a big drinker and this will most likely keep me going until Christmas! 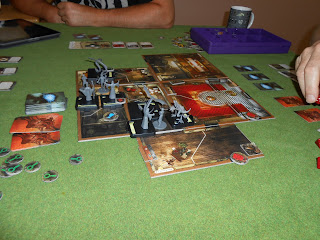 Secondly on Saturday afternoon. Zombicide arrived (purchased via eBay) and the game was like new in condition despite the eBay listing saying it was used. So needless to say this made me happy as well.

And then at the club there was a large colonial game in 15mm British vs Egyptians but as my new zombicide game had arrived I passed on this game (it already had 6 players which should be enough) and sat instead with 2 board game players (Kev and Ian). 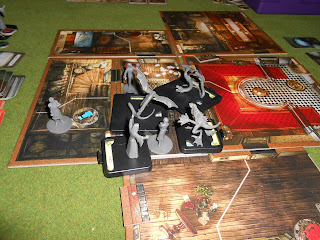 Our first game was "Mansions of Madness" a C'thulhu board game very similar to the Roleplaying game. It was run by an APP on a tablet and played very well indeed. I was really quite taken by the game.

Our mission was to check out the mysterious disappearance of the mansions owner. The game did start slowly despite there being a "Hunting Horror" in the kitchen which was terrifying the butler. Kev was playing a Grave digger, Ian a Secretary while I was playing an Urchin.  I am not sure why an Urchin would be involved but I was.

Things went well we had found loads of clues and very little monsters and I was encouraged to open the wrong door. So Open it I did. The result was a High Priest of Dagon (Who was the mansions owner) 2 Cultists in different parts of the building and 2 more Hunting Horrors all at once.

I became seriously wounded but still in the game. Kevin went insane and Ian also took a serious wound as we all tried to stop the rital and close the gate.

The conclusion was we failed! Kevin Died while Insane, Ian died out right and I went permanently insane trapped in another dimension struggling and failing to close the gate and stop the ritual.

Score 1 for the C'thulhu mythos and zero for humanity. 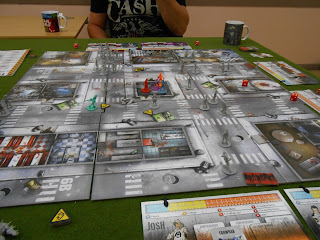 That game over (and not prematurely) we played "Zombicide!" We Played scenario 1 in which the object was to get food water and rice equipment cards and have at least 1 player escape from the board. None of us had ever played before and the game went slowly. Yes I did make a couple of mistakes with the rules. Nothing major. The first 2 times a fatty spawned I did not put the additional walkers on for example. We also played a house rule allowing players to shoot into other zones and IF they hit they did not hit other players.

The game started well but players being the individuals they are split in order to get more loot./Objectives. Probably a mistake as mass attacks do tend to make a difference when it comes to staying zombies.

Phil (AKA Rick) was the first to die as I sacrificed him to let Josh move away from any trouble because Josh was carrying some Rice. Eventually it was too much for us and despite kev having an uzi on each character (Found during play) and making 5 Noise tokens a turn there just were too amny of them. Ian was equally handy with a chain saw but we conceded the game when a wounded Josh was the sole survivor the other end of the board and only carrying 1 of the three things we needed.

But Both were good fun games despite our losses!