Not all tanks are MONSTERS! 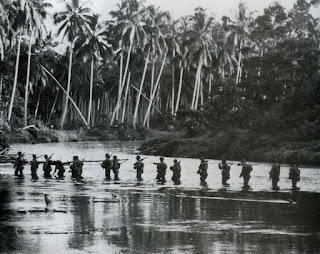 Firstly Let me say I am blindly groping my way into WW2 Pacific wargames. I am not going to say I KNOW much at all about the settings, battles or conditions they all faced. What I will say is that Late war Western front has for the moment lost its appeal, I have seen FAR too many battles which rely on super heavy Goliaths of tanks. So as a remedy I an dipping my toe in the pacific war. 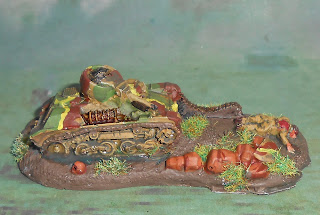 I already have the Americans covered, Graham has the British so I am starting on the Japanese. Who knows maybe I may even think about the Chinese and the Russians and even the French (indo China) or Dutch. But Japanese is my starting point.

So starting with the Japanese here is an objective marker! A destroyed Te Ke (Type 97 Tankette). The model is by Peter Pig and a single piece Resin cast.  The colours of Japanese tanks and even aeroplanes are a NIGHTMARE to get correct. So if you disagree with my colour choices fair play to you you are probably right.

The Type 97 (Te-Ke) was very small. In PBI for  example it is classed as armour 4 and gun 5. Which means that a HMG can shut it down and penetrate the armour! In No way is this a Monster Tank. What is more I know no maker of 15mm Japanese Monster tanks like the 0-1 (Experimental).... which never saw production. To the right does show how small the tankette was. I call it a tankette and not a tank because it really is so small. 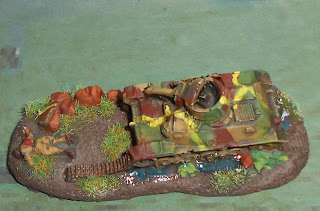 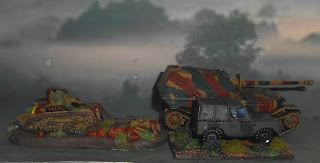 When (if ever) I get some undestroyed versions I will go into the  Tankette details  But as this is an objective marker and not a functional vehicle I am sure you will forgive the delay.

The last Picture shows it with a Zvezda Elephant, and a QRF Short wheel base Landrover. so you can see it ois hardly much bigger than a landrover. Which if you live in England will bring home to you just how small it really is.

That is it for today. I do have some more Japanese 15mm on the painting table so expect some more soon.

Again these are all for matt. I must say I have enjoyed painting them and has gotten me back into the mood toe 15mm again.(More of that later. 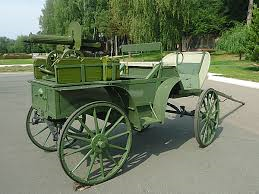 These are 15mm Tchankas from Peter Pig.  A Russian horse drawn cart with an Medium Mg used to give Russian cavalry forces a bit more fire power. used in the Russian Civil war and even WW2.

The pic on the right is a REAL one clearly you can all tell the difference but seeing the real thing might help you appreciate the carts some more than me just saying so.  Clearly they are light weight so speed was considered more important than armour. And the ability to keep along with cavalry units was cherished. The same as Modern troops using APC's to keep up with tanks. 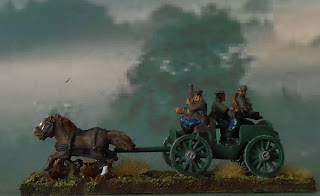 This was the last one completed and I had to wait for the Peter Pig order to arrive before I could even start. (That is part of the Oppsie). Tchankas could have 2-4 horses and also 2-4 crew. Usually the less horses the less crew but not always. All these vehicles have 4 horses but I could quite easily have put less horses on each vehicle. The crew are in white Russian army uniforms for the Russian Civil war. 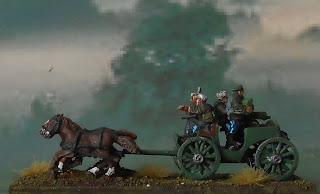 The next one I did finish first. In this one the crew have the Cossack hat (apart from the loader). These hats could have either white or black wool trimming. I settled on white as to me it just looked better. IF mat wants another I will do black IF he chooses. But for now I prefer the white. 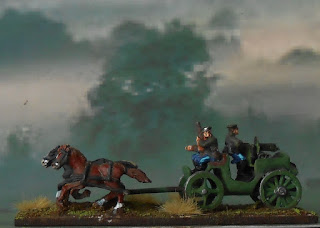 This is the oppsie. I must admit I lost some parts during assembly. I lost the loader and 2 wheels. So I have purchased another vehicle and painted it and will give it to Matt to make up for it. The wheels can from a Biblical Chariot and there is no loader. So the front wheels are completely wrong. The lack of loader is not a problem to me I think 2-3 crew look better than 4. With 4 crew it looks crowded. But as Matt has paid me to paint 4 crew the other 2 vehicles have 4 crew. As this is a "Free" vehicle I feel sure he will not complain. And when they are all together as in the top pic you don't notice it at all.

The last pic is this little lot the car and a few cav all together just for Joe. Who always likes group shots. I mean no offense Joe by mentioning you, I am sure many people do as well but you mention group shots most often.

Thanks for looking today. I hope next time (Saturday) to have finished my fery first stand on ww2 Japanese Pacific war troops. Hopefully an objective marker (destroyed tankette!)

And as a final clip the clip below shows Tchanka(s) in Action in a Russian film. 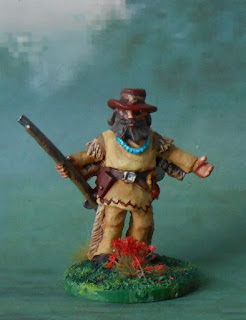 Well I am still painting. But I seem to have stalled for a few days and not gotten much finished at all.

The figure is wargames foundry and I do have a few more to paint as well. So they may get done reasonably soon. They would get done faster IF I actually did know what I wanted them for.  Oh well such is life.

The way I look a it though is if nothing else it is another one done. 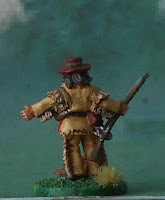 The Reason for my recent lack of painting is that I was waiting for an order to arrive. And guess what it has now arrived. It is one (maybe only I will have to see how I feel) "Not going to Salute Orders. " As I have mentioned before It costs me about £40 BEFORE I go through the door of Salute and that to me is a lot of money.  As such I will go every 4-5 years or so, but going more frequently is not my thing. To me it is a show that is a victim of it's own success.

Anyway enough waffle here is a pic of the order. 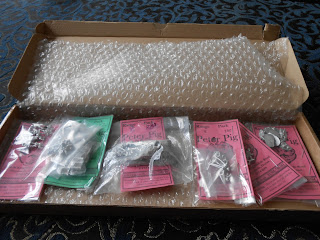 The first Pic is the actual order. many will know it is from Peter Pig and as such is 15mm figures. Trust me if it were a rule set it would be a bigger box. Everything is range 8. For those not familiar with Peter Pig Ranges that means it is all 15mm WW2.

As such it is the things I need to take my Infantry company from Flames of War (Battlefront) to a workable force in PBI. I will not go into the individual pack as I hope to get them all painted pretty soon. By that I do mean this year.

One Pack is worth a special mention though. You can see by the last picture it is a Japanese destroyed Tankette! It will be used as an objective Marker. And is quite small. You will see exactly how small when it gets painted and I put it next to a Panther or Sherman or something similar.

Anyway thanks for looking today. More again in a few days.
Hope it is sunny where you are and I hope you are well and happy. 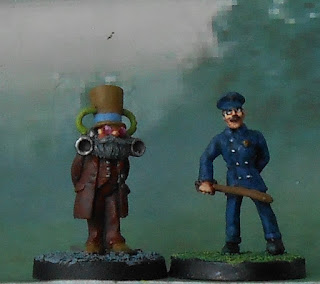 Just a pair of quickly painted 28mm figures. I received these as part of a job lot so other than they are metal and they are 28mm in size I cannot provide many more details as make and range.

The guy on the left is for general steampunk wargaming. maybe for In her majesty's name, Maybe for something else. Only Time will tell. 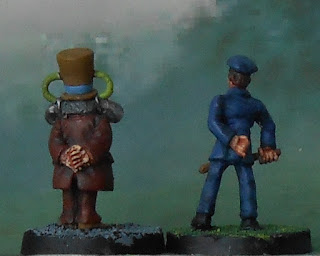 While the figure on the right could also be used for Steampunk is far more suitable for a generic cop on the streets of an American city. Anytime really for the last 100 years.  Perhaps IF I get the up coming "Mad dogs with Guns!" rules (published soon by Osprey he might fit into that. And then again he may fit into anything from Zombies in the modern word all the way back to the Keystone cops.

That is a quick post for today as I am supposed to be cooking the Sunday Lunch and not blogging!