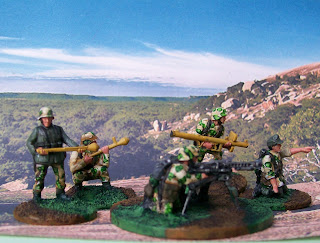 I Have finished a few German late war WW2 figures. They are from the Plastic Soldier company and as you can see in this picture they are all heavy weapons crew. Two are armed with "Panzerfausts" (Tank Fists) disposable anti tank weapons issued a squad level sometime with 3 or more in a squad. One has a "Panzershreck" more a platoon level weapon but as the war drew to a close seen more and more at squad level. And the last 3 are a MG42 on a heavy tripod with gunner, loader and commander. They are all in various degrees of late war "Oak leaf spring" camouflage although one has a field grey tunic. "Oak leaf" is my favourite camouflage patter to paint and given the back drop these figures are against I think it works very well.

All well and good I hear you say but why 20mm WW2 all of a sudden. Well I am so glad you asked. Firstly to bolster my already existing late war Germans which are under equipped with anti tank capabilities. Additionally three members of the club are looking to start the "Chain of Command" rules by the Too Fat Lardies. SO I thought to expand my Germans a little to give me a few extra options when the rules do come out later this year. I have watched the videos on Youtube, and I think it could be a good game so bumping up my German Force was always a good option. Relfie I am told will be collecting the Yanks, (I already have a US PBI force so I don't want to start collecting Yanks in another scale) Ian will most likely do Germans and Kev was talking about Russian.  I think I already have enough British to field a company 1 to 1 so a few more Germans seemed to be in order.

And that Is why I have painted a few Germans in 20mm this week.

I have also been asked to put on a game at a local show in September. As it stands I will use the game from Broadside this year, as that option takes all the pressure of me as I already have everything done. So as I am a "Ninny" I have decided to start a new game board as well in the hopes that I will have it done and the figures painted and everything ready to rock and roll by the time of the show. This new game board will not be for BBIB, but a 28mm board for Crooked Dice.... Yes I know I have ADHD for wargamers! This means that the summer months will be busy for me, making and painting and sorting out figures. As such I think I have got my wargamers drive and motivation back so I intend to blog post every other day again. This should force me to push the board forward. As I type I am waiting for parts of it to dry out so with very good luck I can show you what's going on by Tuesday next week.

Now for my really good news........ good for me, it won't effect you at all.  My job has been "At Risk!" for the last 13 months. I have tried not to let the thoughts of it come onto the blog too much, but it has been a weight on my mind. Anyway cutting a very long 13 month story short. The NHS now consider my job to be "safe!" Which is a huge relief and is probably while I again feel motivated to blog more frequently.

So until Sunday take care and hope to talk to you all soon. Best wishes Clint.
Posted by Clint at 05:05 19 comments: 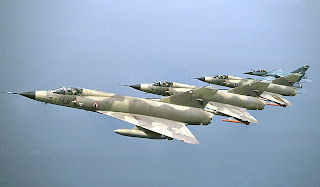 Firstly I have to admit I forgot my camera on Sunday at the club so more typing than pretty pictures.

Tim and Graham had arranged a game of "Check Your 6" JET AGE. So I joined in along with Peter and Bob. Graham reffed and gave Bob and myself 2 Mirage III's while Tim and Peter each had 2 Mig 21's. The date was set as 1967 Arab Israeli war. Tim was the only person who had played the rules before, but only briefly, so no one was really strong with the rules.

We spent the first few turns slowly approaching each other and in general chit chat with each other. Then finally getting into range and the action started. Bob managed to get a rear shot at the engine of one of Peters Migs. He launched a sidewinder missile Peter saw it launch and committed himself to an extreme manoeuvre the following turn in an attempt to out turn the missile. It did not work but the missile only did minor damage on Peters engine as opposed to destroying the plane completely. But it still meant that peters plane was poorly so we on the Israeli side felt good. It got better. In the next turn I was able to get a point blank range shot at a mig in an adjacent hex. Knowing this was the best chance I was going to get I was confident. And this is where it started to go wrong! I rolled the dice and the dice gods laughed.

I was disappointed I will admit it! And then realised my 30mm cannon was not the killing device I had hoped. Never mind I had missiles. I did a "Split S" manoeuvre and flipped the plane ready to get onto the tail of Tim's Migs which were after Bobs Mirage's. I had two planes with rear arc missile shots. My pilots hit the missile buttons and the dice gods laughed loudly. Three of my 4 sidewinder missiles failed to ignite and stayed on the wing pylons. I would be having a few stiff words If I can make it back to the hanger. The fourth missile simply missed. With no more missiles I was now reliant on my cannons and I had seen just how accurate they were earlier!

Bob was near the map edge and had to do a climbing "Immelman" with his afterburners to stay on. It also meant that he was now facing head on into Tim's planes. Tim peppered Bob with his 23mm cannons and got a fuselage hit on one of Bob's mirage which was not so good.

It was about now that club ineptitude can into play! For once not by me! (I admit it usually is!) Peter managed to fly both his planes into the same hex at the exact same altitude. Both his pilots failed to avoid the collision and they both took engine damage with reduced one to only moving 1 hex each turn.

Tim at 1 hex range straffed my second Mirage and while he actually missed and even run out of ammunition managed to get a "lucky" stray shot. he looked at the Luck shot chart rolled 2d6 and rolled a PILOT KILLED. Nothing I could do, Game over for one of my jets. I did say to Tim when I put it on my blog I would make it sound as inglorious as possible. I hope I have archived that. The dice gods were still laughing at me it seems.

The dice gods were smiling on Bob though. Tim's second Mig flew through his sights and DAKKA DAKKA DAKKA later scratch one of Tim's Migs. Bobs other Mirage was limping off the table followed closely.... as it happened far to closely by Tim's other Mig. Bob was able to fly slow enough to remain too close for Tim to launch a missile. Tim was out of Ammo don't forget so his cannons were useless!

We ran out of time at this stage. I would like to say thanks to all the guys, but especially to Graham who supplied everything and despite failing eyesight had painted the planes Very nicely indeed. (Long sighted not going blind I should say so can't paint figures very well usually, well that's what he tells us!).

Conclusion: Would I play the rules again, yes I sure would! While not an "Airhead" I did enjoy the desert tussle and despite the dice gods did have fun the figures we used were by "tumbling dice" and I am tempted to get some. maybe some Vietnam era planes as opposed to the current super jets.