"You have to interact with a zombie" Ewwwww I thought!

Yes that was a quote by Casper, one on the three guys who came down on Sunday to the club. They were Paul, Casper and Christine all from East Street Games, and they put a zombie game on for us. Actually we played 3 games in all. So who is who, Paul  is the owner of East Street Games, Christine  is the rules writer for "Bullets and Brains" their zombie rules and Casper  tweaks the rules and makes it all work. I have over simplified their roles but it should give you an idea of what they all do and who they are.

Firstly let me say they are all very nice chaps so if you see them at a show Please do go and bug them all. In fact make a real nuisance of yourself! I did and will do again! That counts as a fair warning for you P. Seriously nice chaps and worth a chat with.

The table was set up and a briefing given to all players. I was with Dave and we had 6 US army figures our mission was to get 1 figure to a corner and one figure to the opposite corner of the board and we had 8 turns to do so. Ian and Kev played the zombies and they had to stop us. Easy right! Err No. Not that easy. 8 turns is a very tight schedule. Very tight.

Our roster was leader, saw gunner, medic and 3 standard troops. I had the standard troops and Dave the specialists. Each figure gets two actions a turn. The leader may sacrifice his actions to activate another for an additional 2 actions. The SAW gunner could fire 4 times in a action, and the medic could well no surprise heal wounds and cure infections. 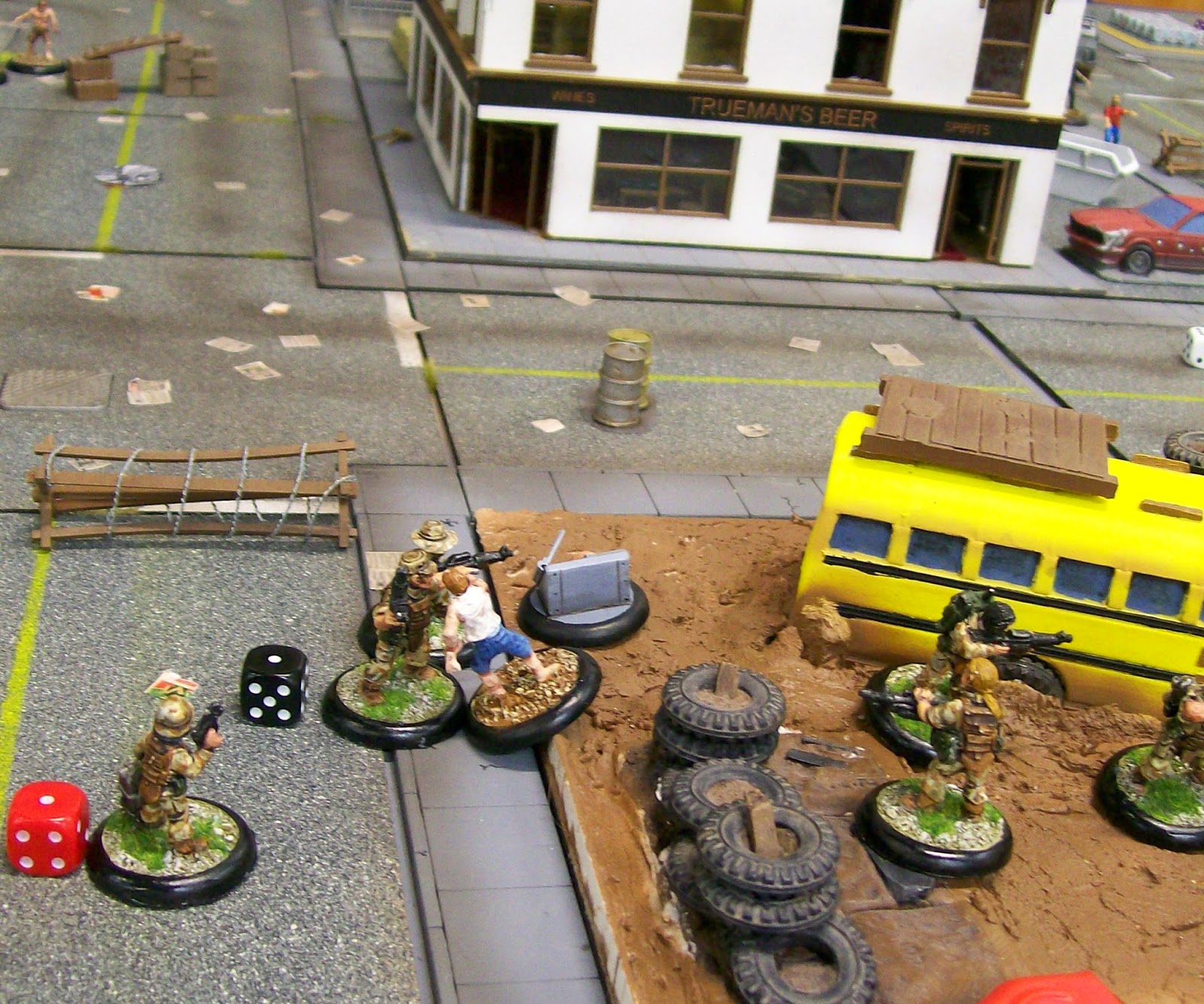 Each figure can take a number of wounds, all zombies can take 2 wounds, and each of the army could take 5. Red dice represents wounds taken and black dice "Infected" wounds. The zombie player has 4 spawning points as well as some encounter tokens. The encounter tokens may be placed on the board OR a small number may be played before activations. Different encounters were worth different points for a total of 10 points.

So here is what happened in the first game. Zombies spawn at each spawn point at a rate of 1 a turn and an additional zombie if the humans were being noisy. Me and Dave were noisy every turn for the 6 turns of the game. So you get more zombies and they get faster if the humans are noisy. But we had a long way to travel and we had to run to cover the distance and running is noisy!

So the first turn I set of an encounter token by getting to close and receive an infected cut for my trouble. Woops! The zombies spawned and as we were close we got attacked. the result was 1 more infected wound on another figure. We used the medics actions to cure wounds and the saw gunner to shoot things as my troops could not hit a barn door from inside the barn with my dice rolling. 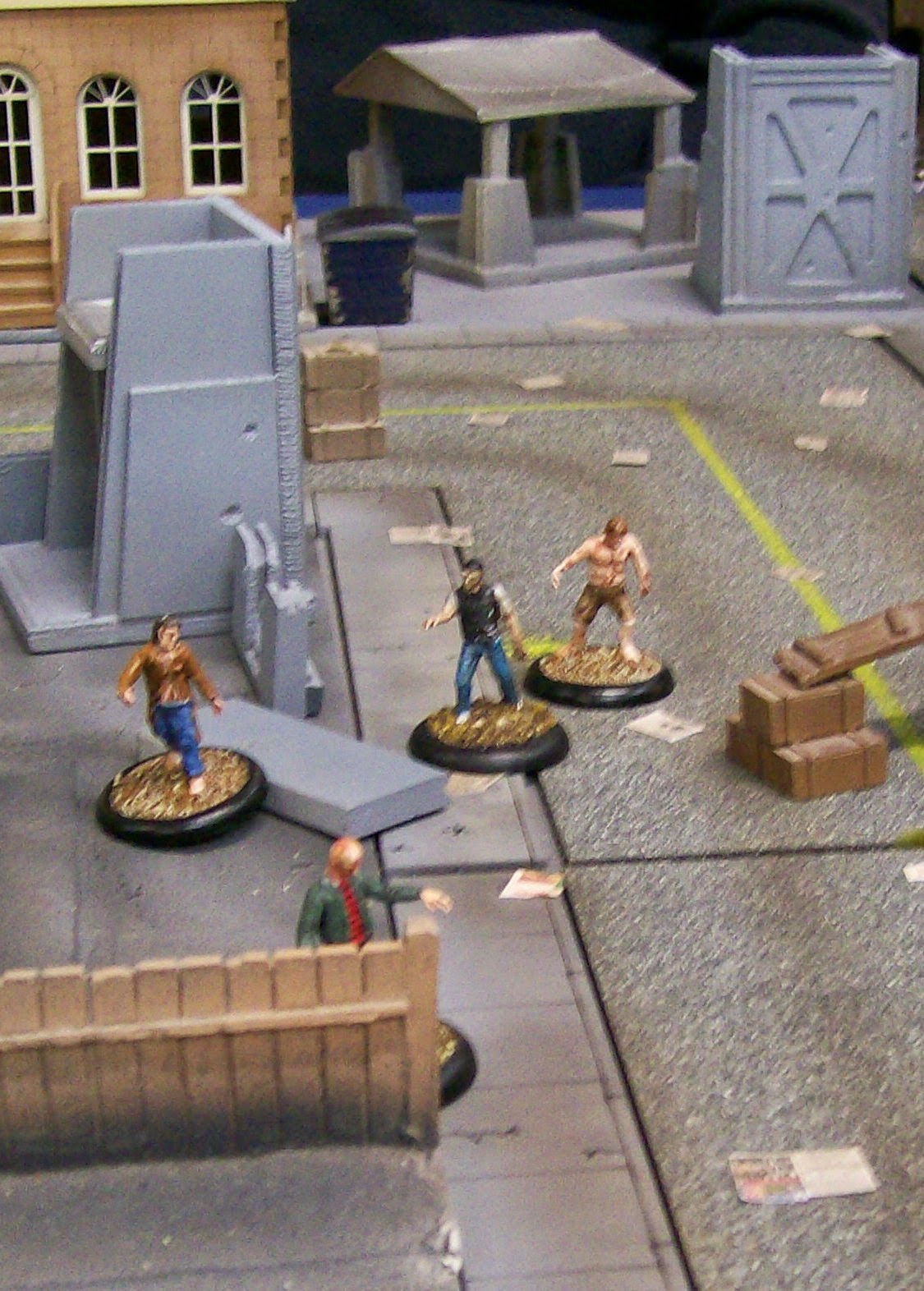 The zombies started swarming and as we were close to the school bus they played an encounter token one they had held back and not placed on the board. The bus exploded. Lucky for us all our troops within 8 inches of the buss were un hurt. God Bless flak vests. Unluckily the last figure who happened to be the medic did take a wound. But it really could have been so much worse, it could have devastated us. 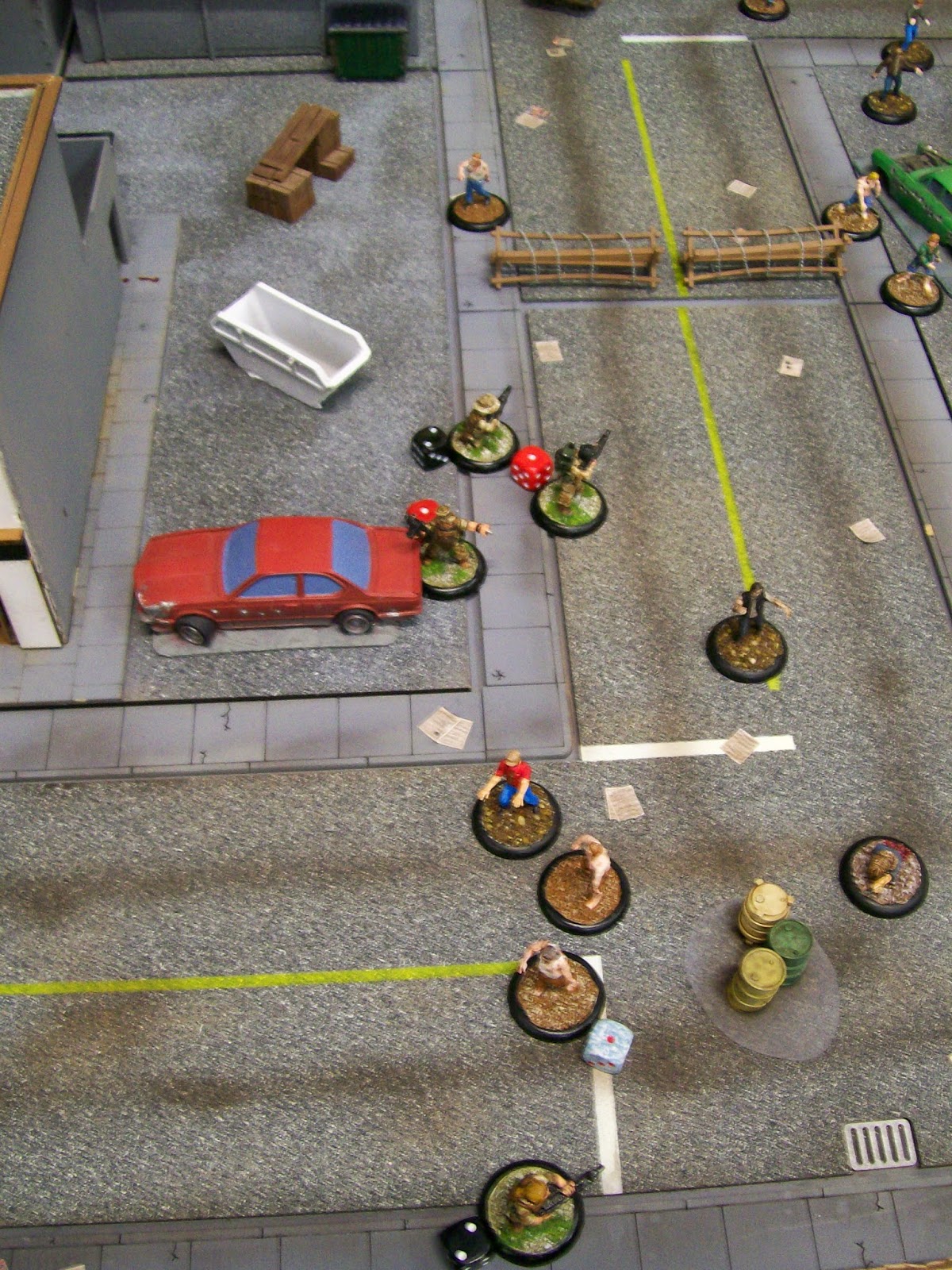 WE continue to move and do get a single figure to the corner edge. Thus giving us a victory point. At several places melee had been joined and mostly the soldiers had come of better. Yeah Mostly. And at this stage mostly we could get the medic to heal. But as each infected wound progresses a level each turn we were struggling to keep everyone healthy and alive and then we realise we were running out of time. So we had to split and that is where it all went to slime. 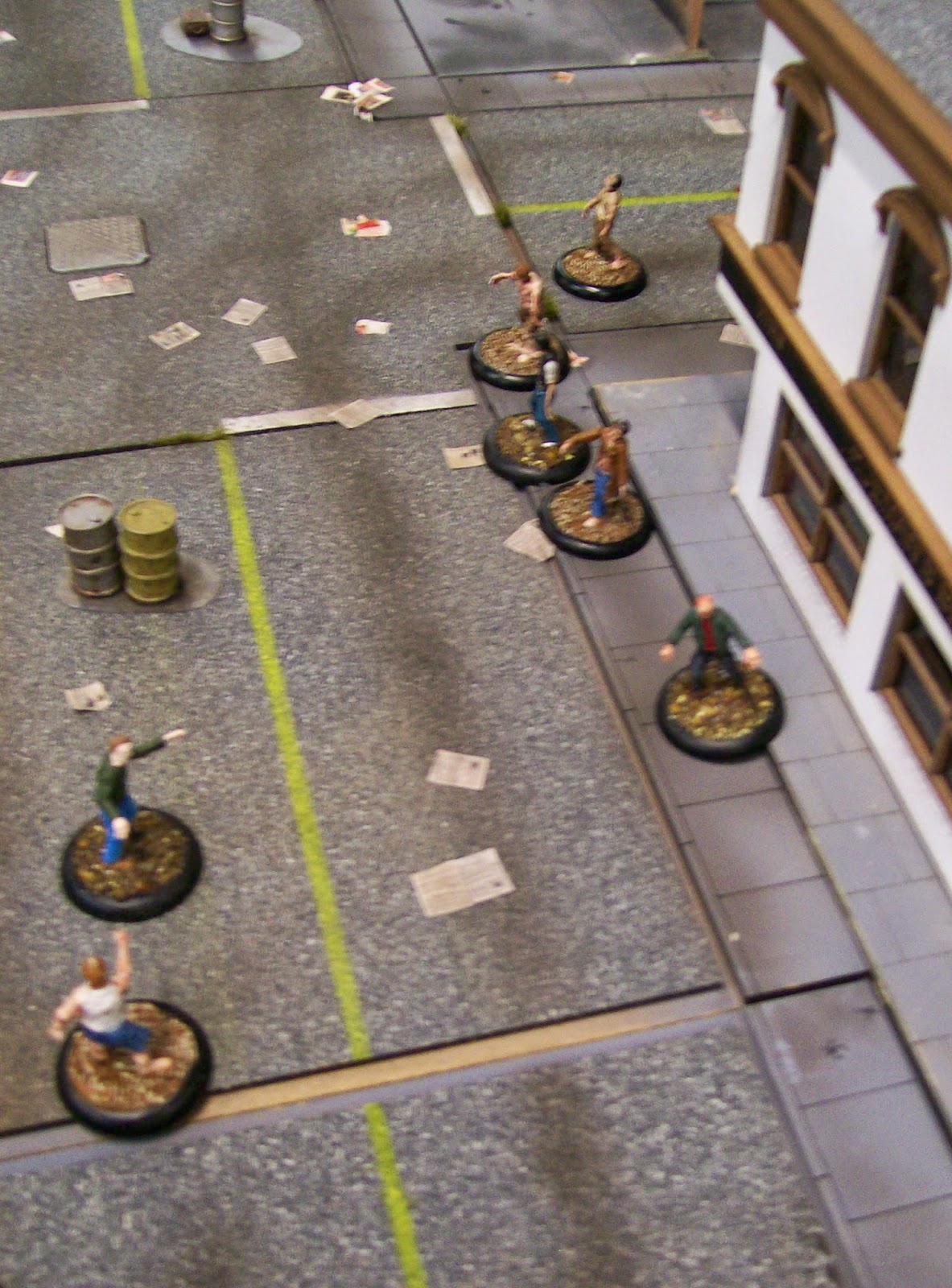 As you can see we were getting a steady stream of opponents chasing us. and while the saw gunner was able to pick of a few each turn it was noisy and was not quite enough to allow for the new noes generated but as we were running and being noisy anyway there was little point in keeping him from not shooting. 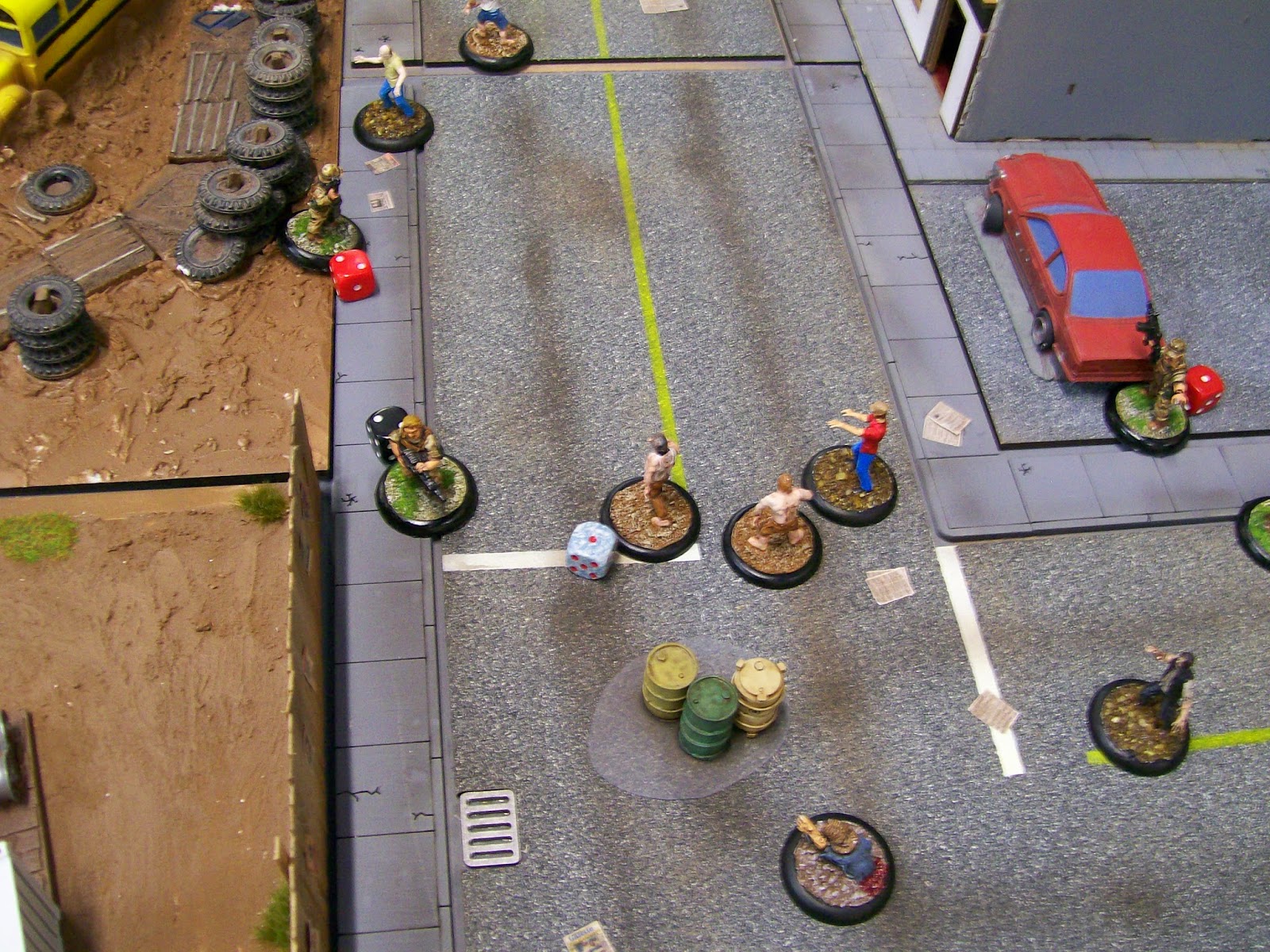 Splitting from the corner we became strung out. the result was the zombies could team up against us. But with only 8 turns we really had little choice but to split up. The 8 turns was the entire game length and we were on turn 5 at this stage! Christine was making "Nom Nom !" Noises at this stage when she moved the zombies. 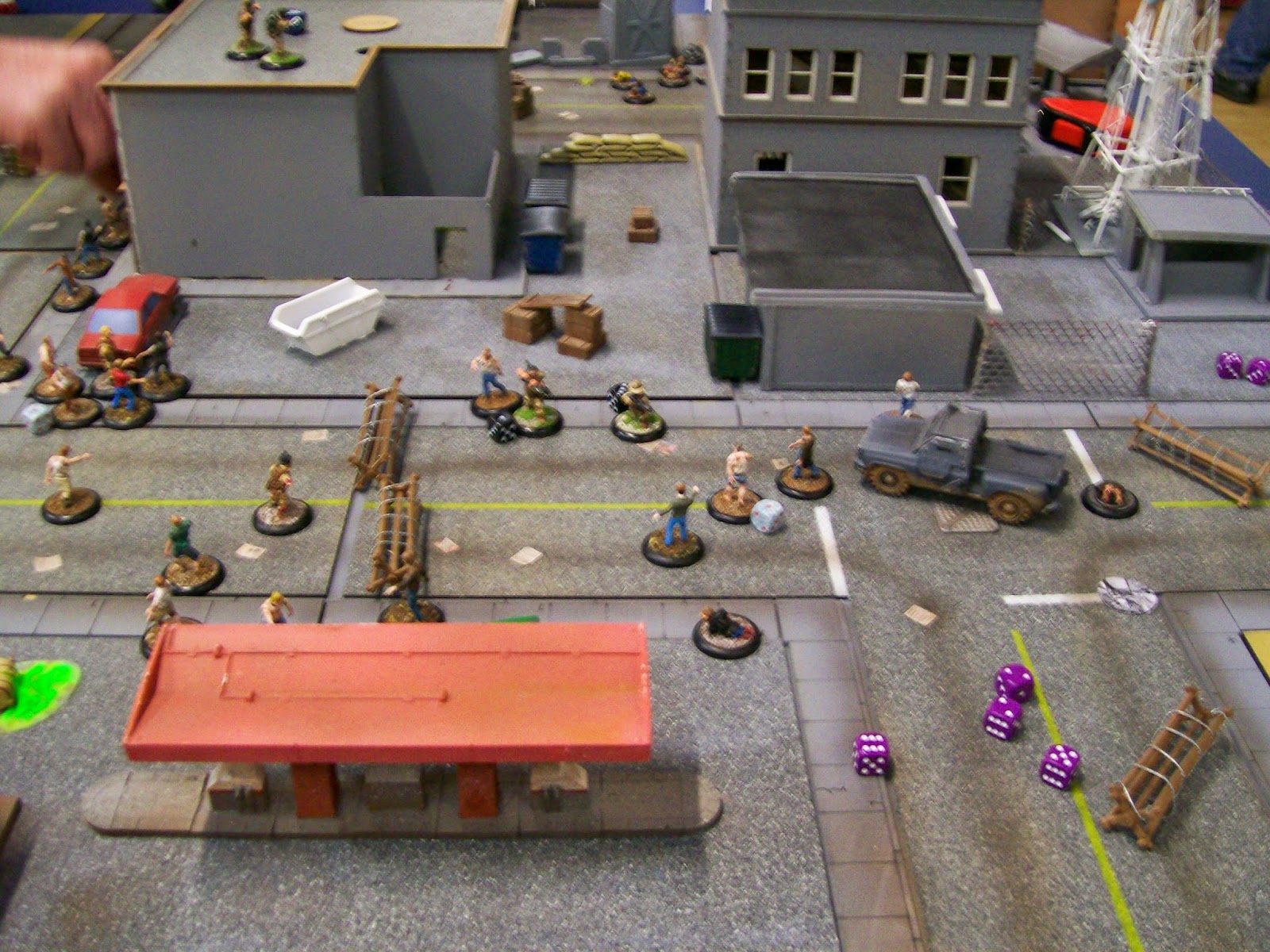 Dave used the SAW gunner to clear a path and I sent the troopers running and not fighting. 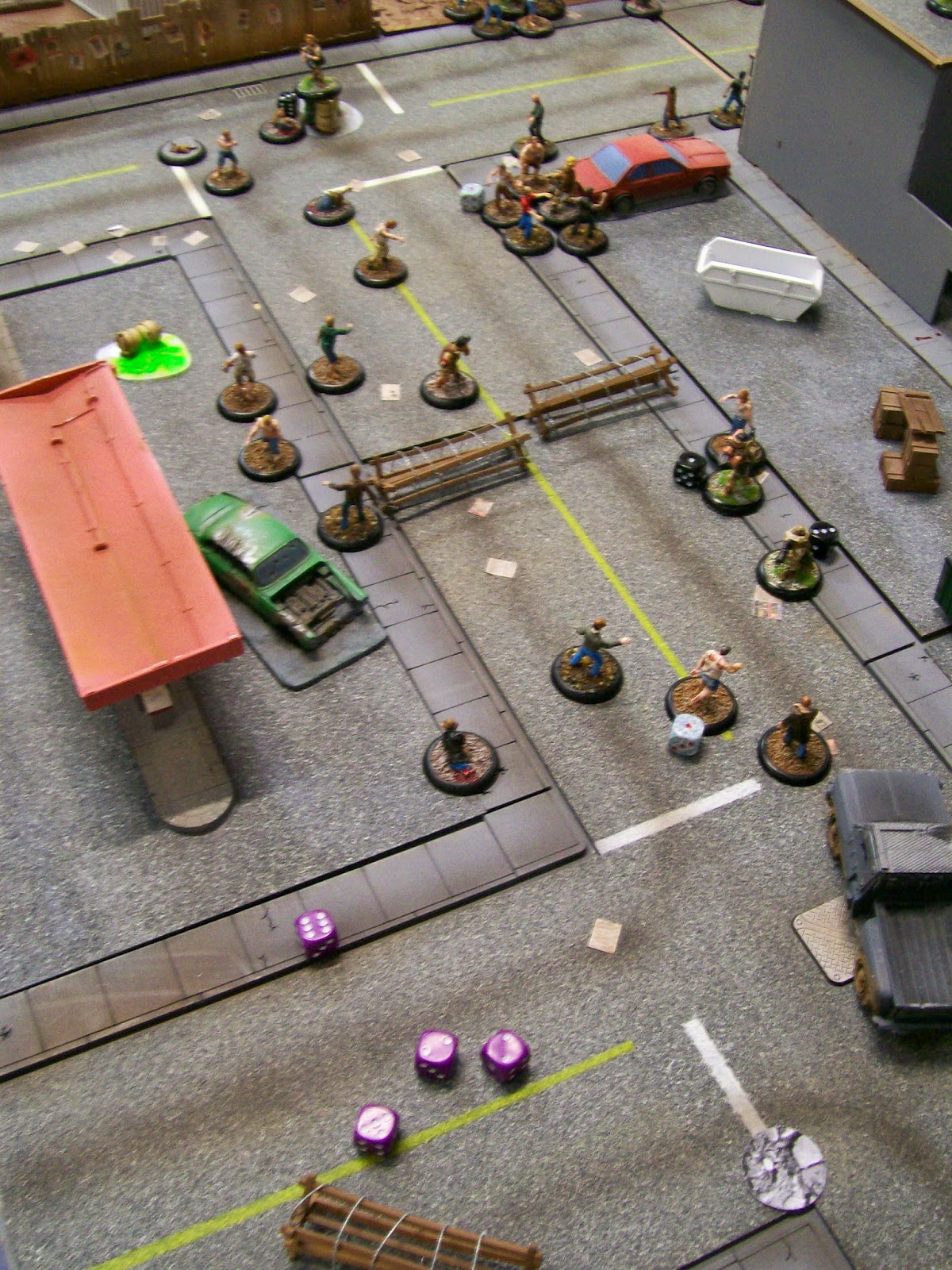 Our leader was surrounded and rather than let him fight back we used him to active one of the running troopers. Suddenly it was turn 7 and I was at least 12 inches away from safety. The leader was engulfed by 4 zombies and succumbed to his wounds and instantly turned into a zed! 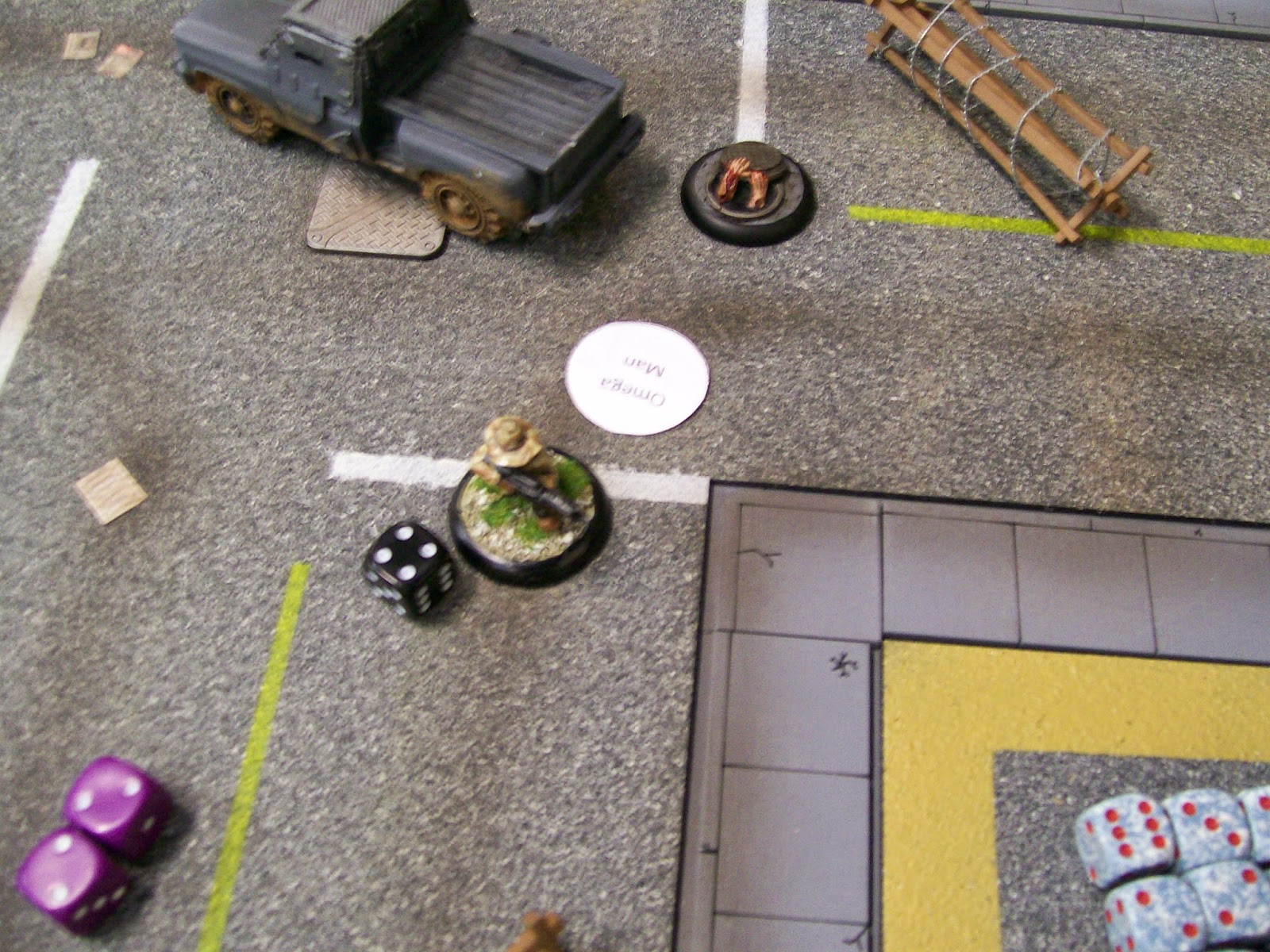 My fastest runner just short of safety flits an encounter token and that allows the zeds to make 3 free attacks on the soldiers. If I cross the yellow line I would make it to safety and win the game. But with only 1 wound left they made their attack and.... 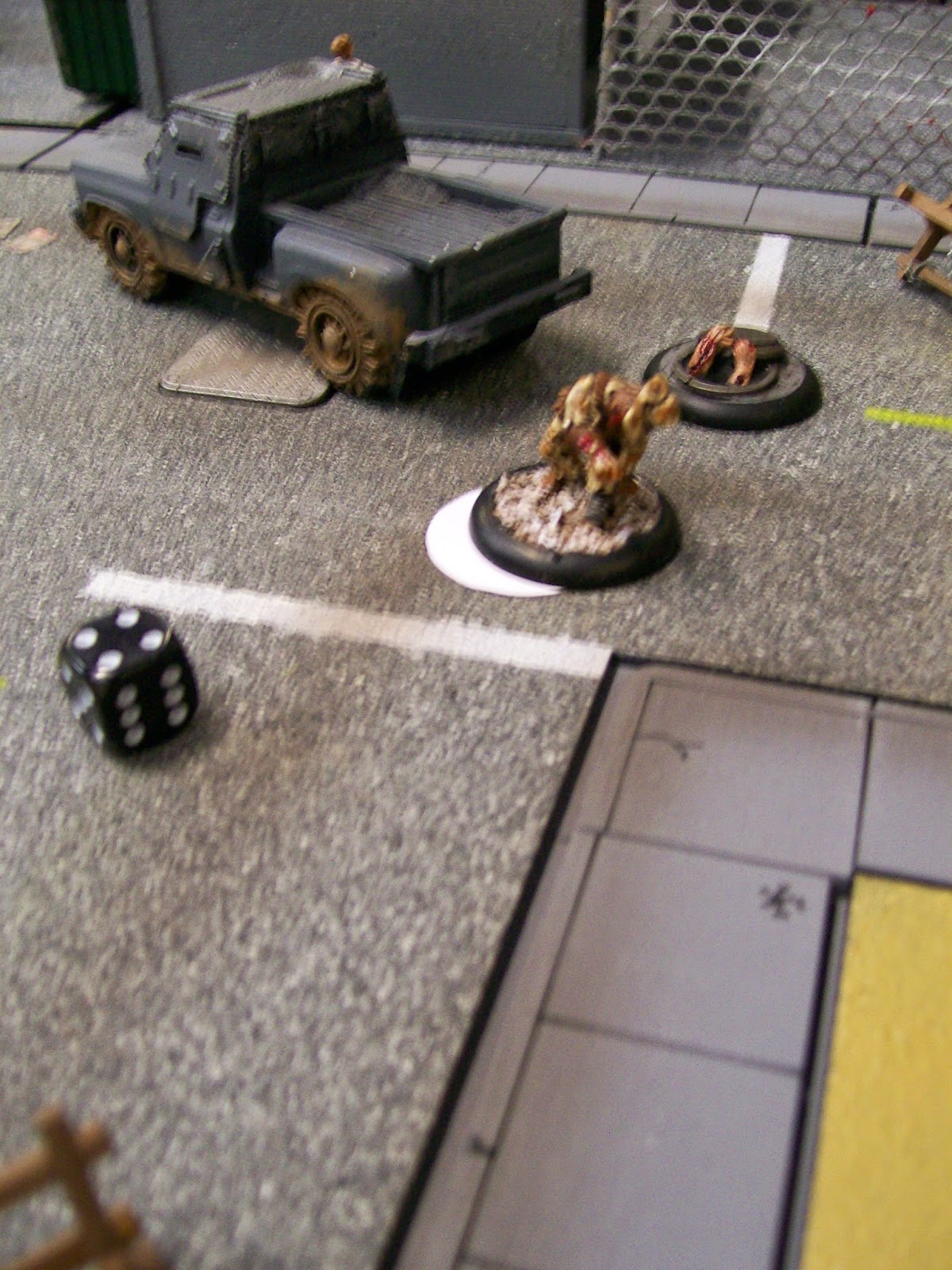 He gets turned into a zombie. inches from safety.

So the first game was a zombie victory. Hard luck Dave and well done Kev and Ian. Tactically we did make a few mistakes we spent too much time healing at the start of the game and that cost us time. Secondly we sent too many people to carry out the first objective to the determent of the second. But the scenario was very balanced and did result in a clear zombie win 2 Victory points to 1 US army Victory point! But for 2 more inches of movement it would have been a US army Victory.

I will post games 2 and 3 later this week. But this blog post is long enough for now so I will need to leave it there.

Overall I was impressed by the rules, they were simple and intuitive and the guys had picked them up half way through the first game. I will talk more of them in the next couple of posts.

Cheers For looking today and episode 2 on Wednesday. Until then take care, have fun and no biting!